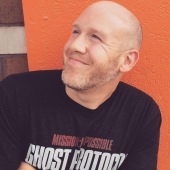 John Hammerle is an avid film critic, producer, watcher and fan. His reviews, best-of lists, and other film thoughts can be found at www.chicagonow.com/hammervision or on Letterboxd and Twitter: @hammervision. A self-appointed disciple of the Steven Spielberg approach to filmmaking, John’s tastes run the gamut, but regularly gravitate to smart, auteur-driven studio blockbusters. John has been writing movie reviews since his college newspaper days at Butler University in 2000. He sees roughly 250 new movies every year, and rewatches countless others. His ChicagoNow blog has been going strong since March 2010. When he’s not watching or writing about movies, he’s making them. In 2016, he co-produced and served as production legal counsel on the indie heist thriller Dead Draw, starring Gil Bellows, Bitsie Tulloch and Michael Eklund. He also chairs the Fine Arts Association for Saint Juliana School in Edison Park.