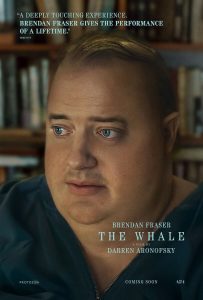 The comeback is legitimate as 90s leading man Brendan Fraser returns to glory in a performance that stands as one of the year’s very best. In THE WHALE, Fraser plays Charlie, a 600-lb. recluse of an English professor, a self-destructive man eating himself to death, battling depression, and trying to connect with the few people he allows in his orbit. Under a latex, fat suit and heavy makeup, Fraser manages to connect with us profoundly, emphasizing the sweet, intelligent soul buried underneath the garish covering. Unfortunately, too much of Darren Aronofsky’s direction and Samuel D. Hunter’s adaptation of his play work against such sensitivity. They default far too often to painting Charlie as grotesque, focusing on his body parts, his terrible eating habits, and his sweat-soaked slovenliness. The result is a film at odds with its own messaging about looking beyond the cosmetic and seeing people more deeply.

Indeed, Charlie is so ashamed of his appearance that he conducts his online writing classes with his camera shut off so as to not repel his students. Yet, even with no physical person to see, his students connect with him. Charlie is smart and quick-witted, and his gentle voice is wholly encouraging. He cajoles his students to dig deeper into their writing, beyond the obvious, and they love him for it. Aronofsky should understand the metaphor at play here better than he does. He’s looked beyond labels or tremendous flaws in characters to find their humanity in his past films like REQUIEM FOR A DREAM, THE WRESTLER, and BLACK SWAN.  But here, almost every time the director concentrates on the gleam in Charlie’s eyes or the poetry in his voice, he counters with too many shots of him gorging food, wheezing while walking, or struggling to do the simplest tasks because of his girth. It starts to feel less sympathetic and more exploitative.

Thankfully, Aronofsky does a crackerjack job of directing Fraser and co-stars Hong Chau and Samantha Morton. Chau plays Charlie’s long-suffering at-home caretaker Liz and she’s marvelous in every frame, showcasing the pain, pluck, and courage in how she deals with her reluctant charge. When she and Fraser banter or bicker, the movie crackles with verve. The same can also be said of the crucial single scene between Charlie and his ex-wife Mary played by the ever-wonderous Morton. Mary is furious at Charlie for attempting to reconnect with their teen daughter after a decade apart. Her berating of Charlie is filled with fear, regret, and her own self-loathing, making for a spectacular 10 minutes of screen time.

Aronofsky isn’t as successful with the film’s other two key roles. He lets Sadie Sink overact in scene after scene as Charlie’s surly daughter Ellie. And neither the director nor screenwriter Hunter seems to know what to do with the character of Thomas, a religious missionary pestering Charlie throughout the story. The ‘up with people’ God-squader is more of a conceit than a character. He’s omnipresent to provide a counterpoint to Charlie’s death wish, but Hunter leans into too much ‘stagey’ dialogue with Thomas.  And Simkins struggles to make his character play as realistic as Charlie, Liz, or Mary do in the drama.

What Thomas does get right in his adaptation is letting Charlie’s humanity and decency come through, even while battling his strident visitors. (Who’s more offensive is one of the writer’s unspoken queries for the audience.) Fraser lets us see who Charlie really is, despite Aronofsky’s emphasis on the physical. If only the director had concentrated more on Charlie’s beauty he might have had a film as excellent as his lead actor.

from The Establishing Shot https://ift.tt/LZbMuxI
via IFTTT