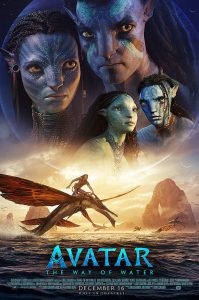 Upping the ante of 2009’s blockbuster AVATAR for a sequel might’ve been daunting for most any other filmmaker, but few are as bold, obsessive, or driven as James Cameron. He’s not only a visionary but he’s got the patience of Job, determining that his megahit wouldn’t just have sequels, but four new iterations, even if it meant taking decades to create them. AVATAR: THE WAY OF WATER is Cameron’s first follow-up, premiering in theaters this Friday with a run-time of 3 hours and 15 minutes. It’s a stunning, visual feast, with every shot beautifully crafted via painstakingly perfect CGI. Big emotions are just as apparent throughout too, with Cameron’s storytelling pulling on our heartstrings unabashedly from beginning to end. Yes, some of the filmmaker’s storytelling is, ahem, leaky, and his idea of dialogue too often defaults to unclever snark, but he is a world-builder like few others and it’s evident in every second on screen.

Wisely, Cameron’s new chapter takes place many years after the first saga, reflecting the time between the 2009 film and this one. Jake Sully (Sam Worthington) and Neytiri (Zoe Saldana) are now happily living on the planet Pandora, parents to four children including adopted teen daughter Kiri (Sigourney Weaver). Kiri has DNA from the departed Dr. Grace Augustine, played by Weaver in the original film. Soon enough though, the ‘sky people’ return to wreak havoc on their harmony. This time, the American military invades Pandora looking for new digs as Earth is now a ruined planet, depleted of its natural resources.

Cameron and his fellow screenwriters Rick Jaffe and Amanda Silver lay on the “imperialistic invaders” trope mighty thick in such plotting, and it lacks imagination that they’ve brought back Colonel Quaritch (Stephen Lang) to be the main bad guy once again. Even though he was killed by Sully and Neytiri in the first movie, his DNA lives on, now implemented into the body of a Na’vi avatar. Edie Falco may be on hand as his C.O. but make no mistake, it’s Quaritch still running the offensive….emphasis on the offensive. He’s still a sexist, racist, and homophobic bully, but now he’s got all of the powers of a blue Na’vi to make him even more intimidating.

That’s the set-up for this sequel, essentially a war picture at its core, but thankfully, most of the middle part of the film takes place in a more peaceful and aquatic part of the planet, untouched by the battle on the mainland. Sully and his family escape Quaritch’s wrath by migrating to the islands of the Metkayina. There, the reef people, greener cousins to the Na’vi mainlanders, are led by Tonowari (Cliff Curtis) and Ronal (Kate Winslet). They teach Sully et al. ‘the way of the water’ and soon enough the visitors are enjoying their new land, sea, and bevy of exotic creatures. They even learn to swim and breathe underwater. And, as the Sully clan learns to live ‘the life aquatic,’ the teen children take center stage in the middle hour’s narrative.

That section contains the most compelling part of the story as teen son Lo’ak (Britain Dalton) develops a friendship with a 300 ft. whale. The two outcasts bond, both misunderstood and underappreciated by their own kin. The scenes where they talk and swim together are a total delight and the pathos of the whale is heartbreaking. Try to maintain a dry eye when the whale communicates why he’s been shunned by his mammal family. You’ll discover the way of the water too.

In such vivid, emotional moments Cameron demonstrates his inner Walt Disney, playing up the love for beasts and children. Of course, Cameron also loves to get in touch with his inner Sam Peckinpah and Michael Bay too as the symphony of carnage in the last hour proves. In that third act, all of Cameron’s body of work seems to meld together into one bombastic pastiche: the battle scenes in ALIENS, the body count of THE TERMINATOR, and the underwater claustrophobia of THE ABYSS.

One could argue that one sequel, let alone four, is not necessary for a film like AVATAR that stood on its own as a self-contained adventure. Still, Cameron’s dizzying and dazzling display is something that should pull plenty of patrons into the Cineplex. See it in 3-D too, on the biggest screen possible. It’s the only way to fathom such artistry.

from The Establishing Shot https://ift.tt/nYWwjQU
via IFTTT