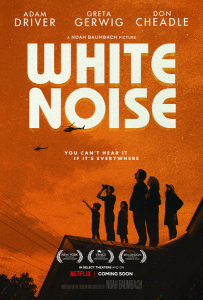 Noah Baumbach and Sam Mendes are two exceptional filmmakers. And yet they, like many other top directors before them, have now helmed miscalculated Oscar-bait releases that mostly disappoint. You can add Baumbach’s WHITE NOISE and Mendes’ EMPIRE OF LIGHT to the list of such noble efforts in the past that didn’t pass muster either, like Steven Spielberg’s 1941, Brian De Palma’s BONFIRE OF THE VANITIES, and Darren Aronofsky’s NOAH. An A for effort for all of them, a middling C at best for the final result for each too.

Baumbach has been examining the American family with stellar results for years now with standout films like MARRIAGE STORY and THE SQUID AND THE WHALE. Still, his WHITE NOISE is as inexplicable as those two were spot on. Ostensibly a character-driven comedy about an eccentric family managing various disasters in their lives, it strains to be both funny and relatable. Based on the 1985 Don DeLillo novel of the same name, Baumbach and his cast fully commit to the shenanigans but it’s not nasty enough to be the apocalyptic dark comedy it wants to be and nowhere near as clever as it needed to be to engage fully.

Adam Driver plays Professor Jack Gladney, an earnest professor in a sleepy town in the early 80s, teaching German history at the university and corraling his feisty brood at home. Gladney is considered a pioneer of Hitler studies (are we laughing yet?), which is ironic considering he doesn’t speak a lick of German. His attempts to learn throughout the story are undermined by the many home events distracting him from his priorities.

Those distractions include his breezy wife Babette (Greta Gerwig) whom he suspects of having either an affair or a nervous breakdown. His blended family from his four previous marriages and those of his wife make up for strained eccentricity in the house too, most of which feels more irritating than amusing. Everyone carps at each other, but Baumbach wants us to believe they’re all just noisy, irascible scamps. Hardly. The director doesn’t bother to make any of his cast particularly likable, save Driver who struggles to make something of his vague part.

Thus, when various disasters befall them, like a radiation incident that sends this family on a road trip to escape the poisonous mist, we don’t feel invested. Even when their car takes a wrong turn into the drink, it should create hearty guffaws, but the humor drifts away like their car downstream. Where is Baumbach’s rollicking dialogue or some sense of elevated comedy to bend all this toward an inspired farce? Baumbach spends a lot of time satirizing 80s fashion and chain grocery store aisles, but his editorializing on consumerism feels heavy-handed, even garish.

Driver tries his damnedest and Gerwig can do ditz in her sleep, but they’ve both been much funnier in other places. Same with Baumbach. I’m sure they’ll all return to better fortunes soon, but for now, their efforts in WHITE NOISE make for one of the season’s bigger disappointments. 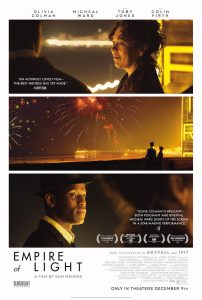 EMPIRE OF LIGHT, on the other hand, has a lot more in it that works, from its feelings of nostalgia and examination of mental instability as shown in the central character that Olivia Colman plays. Still, its excellence in parts doesn’t quite equal a sum of a successful movie.

Colman plays Hilary, an often kind and shrewd cinema manager at the Empire theater on the South Coast of England in the 1980s. She’s having an affair with her prickly boss (Colin Firth) and looking for something more in her life than her middling lot. Stephen (Michael Ward), a new black man who’s hired, puts some wind in her sails, and soon they start a strange but affecting affair. They deal with ageism, racism, and her mental instability, but it doesn’t add up to enough. The film is bathed in warm, glowing hues, but the story feels standoff-ish.

True, the film can boast of its stellar production values including some top-notch cinematography from Roger Deakins, period production design by Mark Tildesley, and a moody score by Trent Reznor and Atticus Ross. But Mendes’s meandering screenplay doesn’t even make enough of the celebration of cinema that should be at its core. Instead, Mendes leans hard into the racism angle in the back half of the story, and in a heavy-handed way that feels more exploitative than heartbreaking.

Mendes piles on broad swipes at skinheads, Thatcherism, and the growing mood of economic resentment in the working class too, but where is the joie de vivre regarding the escapism found at the Empire cinema? It doesn’t get nearly its due. At one point in the narrative, the Empire hosts the England premiere of the 1981 film CHARIOTS OF FIRE, a landmark return to international prominence for British cinema, yet the opportunity is frittered away. We don’t see enough clips of the famous film or its effect on the moviegoers.

Ignoring that classic Best Picture could stand as a metaphor for this film as a whole. Despite the salute to the ritual of attending the theater in EMPIRE OF LIGHT, from the concessions stand to the ushers to the coming attractions, not enough comes of the glory of what it’s all there for – movies. The actors give the material their all, and there are some deft supporting turns, particularly by Toby Jones as the wise, old projectionist, but none of it carries the impact it should because the story feels so fractured.

It seems obvious that Mendes should be making more of the glory of moviehouses before DVDs, streaming and VOD took over so much of the landscape, but he seems preoccupied with the more soapy themes of the story’s sexual affairs and British politics. For a movie entitled EMPIRE OF LIGHT, it’s ironic that he has failed to properly illuminate the wonders of escapism inherent in his story.

from The Establishing Shot https://ift.tt/RaChrej
via IFTTT