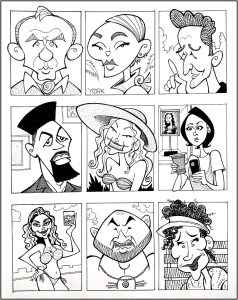 Original caricature by Jeff York of the cast of GLASS ONION: A KNIVES OUT MYSTERY. (copyright 2022)

Writer/director Rion Johnson’s KNIVES OUT was a huge critical and audience success back in 2019, and it wasn’t long before Netflix made a whopping contract with the filmmaker to do some sequels. GLASS ONION: A KNIVES OUT MYSTERY is the first, and, unlike so many sophomore efforts, this one doesn’t disappoint. If the mystery isn’t quite as compelling as Johnson’s first, and the cadre of suspects not nearly as menacing, it is nonetheless a delightfully fiendish romp filled with snarky characters, loads of visual humor, and a loosy-goosy Daniel Craig returning as country-fried sleuth Benoit Blanc. This sequel even has a number of fantastic twists that not only rival those in the first but pay homage to the grand dame mystery writer herself, Agatha Christie, in their elaborate intricacy.

The story starts with a number of one-percenters all being delivered an elaborate invitation to a weekend party on the private island of tech whiz Miles Bron (Edward Norton). The vainglorious mogul loves games and the invitations he sends are actually boxes of intricately designed puzzles that his guests must decipher. They’re all lifelong chums, and Miles wants them to visit him for their latest soiree. Among his cronies are fashionista Birdie Jay (Kate Hudson), YouTube star Duke Cody (Dave Bautista), Governor Claire Debella (Kathryn Hahn), and scientist Lionel Toussaint (Leslie Odom, Jr.). After solving the intricacies of the invite, they all head to Greece where they’re tested for COVID-19 before being whisked away to the middle of the Aegean Sea.

Miles is thrilled to see his friends, but two surprise guests are in tow. One is Blanc, unsure of why he was invited – it puzzles Miles too – and the other is the mogul’s former friend and lover Andi Brand (Janelle Monaé). She says little and glowers at her former paramour because it seems that earlier in their careers, Miles stole her idea for the tech company. In addition to the surprise guests, also along for the ride are Birdie’s doormat of an assistant Peg (Jessica Hardwick), and Duke’s sexpot girlfriend Whiskey (Madeline Cline).

Johnson sets all this up with relish. He’s both narrating and satirizing the tropes of Christie, not to mention other star-studded procedurals like the underrated 1973 thriller THE LAST OF SHEILA. (It was written by Stephen Sondheim and Tony Perkins and if you watch it, you’ll thank me later.) All the guests arrive, and slowly but surely, it is revealed that all of them, except for Blanc, have an axe to grind with their host.

Miles is not only a narcissist but a supercilious snake as well. He wants them to play his elaborate game where he is ‘murdered’ but soon enough, legitimate reasons to cause his demise will be uncovered. It’s all nasty fun, juxtaposed against a gorgeous mansion, the sun, and the pool. But just when you think the story is going to go one way, Johnson wisely starts pulling rugs we don’t see coming. To tell you more beyond that would be spoiling the fun, but suffice it to say, the twists and turns are both shocking and a stitch. Blanc steps up to be a real detective on the scene and the challenge to us in the audience is to see if we can match wits with him.

All of the performers are having a blast, and it’s especially nice to see Hudson giving a great comic performance in a juicy role. Craig is a hoot as he tries to navigate the clues and the egos scattered about, and his Foghorn Leghorn accent is even funnier this go-round. Norton oozes sleaze and is a hissable baddie, while Monaé is so good in an exceedingly complex performance that it would be a crime for her not to be nominated for Best Supporting Actress come Oscar time.

The strange title of the movie comes from a glass tower on Miles’ island, one that is both gorgeous and ostentatious and gorgeous. Of course, the onion is a metaphor too for the peeling back of the mysteries in the story, and it’s just another example of how much fun Johnson is having playing Christie here, as well as playing us in the audience for all we’re worth. It’s all the more impressive given that this sort of sub-genre with a celebrated gumshoe cracking a case with an all-star cast as his suspects is so rare in this day and age. Johnson is the real gamester here and what a pleasure it is to be a part of his puzzles.

from The Establishing Shot https://ift.tt/2Yi9K0e
via IFTTT