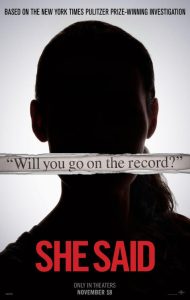 Any time an intrepid reporter can bring down a giant in a “David vs Goliath” way is inherently dramatic. Thus is the case with the remarkable true story of how New York Times reporters Jodi Kantor and Megan Twohey exposed the horrific sins of movie mogul Harvey Weinstein. In the book SHE SAID, the two reporters chronicled their experiences and now it’s been adapted for the cinema by screenwriter Rebecca Lenkiewicz and director Maria Shrader. Their effort is noble and often sharp as a tack, but ultimately, the film fails to make the most of its incredible story. It’s still worth seeing but its narrative shortcomings prevent it from joining the likes of ALL THE PRESIDENT’S MEN or SPOTLIGHT.

Zoe Kazan and Carey Mulligan play Kantor and Twohey, respectively, and they both give sharp and detailed performances. These two reporters were experienced at covering stories about the workplace which made them a natural to investigate the burgeoning talk of sexual harassment problems at Miramax Studios concerning Weinstein. The film does a good job of showing their ‘detective skills’ in chasing down leads, interviewing former Miramax employees that Weinstein assaulted or raped, and showing how they put the story together with their editors Rebecca Corbett (Patricia Clarkson) and Dean Baquet (Andre Braugher). SHE SAID also covers the personal lives of Kantor and Twohey, showcasing how they navigated their tough jobs alongside their busy home lives.

The film stumbles, however, in three distinct areas that keep the film from being great. For starters, far too much of the dialogue spoken throughout is completely on the nose. Perhaps Lenkiewicz felt the need to shorthand matters to squeeze in more story, but it feels false when characters declare exactly what they’re doing or thinking. Late in the game, Corbett bursts into a room after securing Weinstein’s testimony and exclaims, “His response just came in. I’m pulling quotes now.” Show, don’t tell, is one of the first rules of screenwriting and it’s ignored a lot throughout.

The other two problems are visual ones. Shrader fails to create enough physical tension throughout, whether it’s in fleeting flashbacks chronicling how  Weinstein’s abuse played out, or in the threat of his protectors to the reporters in the present day. At one point in the narrative, an SUV is shown pursuing Kantor down the street but the whole episode is finished in a matter of seconds. Shrader could have and should have made much more of it. Perhaps she too felt pressure to keep the story moving but such short-shrifts stick out as missed opportunities to enhance the stakes.

Finally, the film should’ve shown much more of Weinstein’s interactions with the reporters. Those confrontations happen mostly off-screen and why the filmmakers chose not to make more of such drama is puzzling. He’s the villain of the piece and yet he’s barely in the movie. Clearly, it was a conscious decision to not show him or make more of the character, but when they finally get him on record, the film all but ignores his testimony.

In other instances SHE SAID doesn’t pull its punches. The film isn’t at all afraid to name names, and Shrader gets superb supporting performances from Jennifer Ehle, Zach Grenier, Peter Friedman, and in particular, Samantha Morton. Her tense, 10-minute scene as Zelda Perkins, one of Weinstein’s earliest victims, is a riveting highlight of the film. If only more of the film crackled like that.

Such scenes and the effective performances across the board are enough to recommend the film. As is the important story that people should know and never forget. It all makes for a good film. But it misses greatness.

from The Establishing Shot https://ift.tt/PVRKfdW
via IFTTT