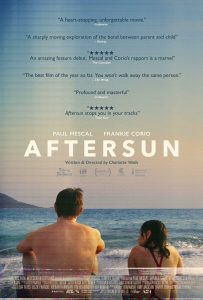 The new film AFTERSUN from filmmaker Charlotte Wells could ostensibly be called a coming-of-age story as we watch 11-year-old Sophie (Frankie Corio) start to understand the shortcomings of her father Calum (Paul Mescal) during a vacation together in Turkey 20 years ago. That characterization, however, is too simplistic. It’s as much a memory play, a fever dream, and perhaps even a eulogy of sorts. No matter how you could describe it, the movie is a fascinating character study of two people connecting and disconnecting through a holiday and the emotional weight that it carries. It makes for an unsettling film experience, one of the more challenging and fascinating of 2022.

There is a lived-in, casualness to the proceedings that Wells brings to life here so brilliantly. With little set-up, she places us in the father/daughter relationship as a virtual fly on the wall, observing all of their interactions up close and personal. The dynamics on display are unusual: he’s a barely 30 father, immature but chummy, and she’s quite mature given her age. She holds her own with him, with no mom around, clearly suggesting that Calum’s marriage was not a good one and ended in divorce.

Still, despite being a very young parent, Calum is loving and attentive, never talking down to his child, and acting almost like more of a playmate. He enjoys games with her, dancing, laughing, and generally acting silly. They have a good rapport and it’s a relief that, despite being immature himself, Calum treats her well. Cinematographer Gregory Oke’s close camera work shows all the nuances of their relationship. Wells also showcases their connection through the video of the father and daughter shooting each other with a camcorder on the trip.

Soon enough, however, Wells reveals that the video record is crucial to the adult Sophie’s remembrance of her vacation with her dad in Turkey. The adult Sophie (Celia Rowlson-Hall) returns to the clips, looking for answers to their relationship. Where is her father now? What happened to him? Did their relationship sour? Such anxious questions carry all the more weight as the adult Sophie seems to be a  moody and hardened young woman. She is in a lesbian relationship, caring for a child together, and the parallels to her father’s issues when he was her age start to come into focus. The apple doesn’t fall far from the tree, as the saying goes.

In addition to only fleeting glances of the mature Sophie, Wells gives us fantastical glimpses that appear to be a fever dream of hers as she tries to connect with her father in a dream-like disco world. That nightclub did appear prominently in Turkey during their vacation together there, but just what’s so important about it remains an enigma. Wells adds to the impenetrable by using strobe lights to add more oddity to it, even a sense of dread. These images are especially provocative while juxtaposed against the hyper-reality of the vacation scenes and their inclusion begs us to watch all of it again, closer, and more exacting, just as Sophie clearly is in her quest for answers. What can be ascertained in seemingly random moments of breakfast together, interaction with other vacationers, and even karaoke performances together?

As the film goes on, we are encouraged to watch Calum closely. There are moments suggesting melancholy.  He is struggling with demons – money, parenting, mental health – – all hinted at subtly. It’s a credit to Wells and her performers that nothing is ever heavy-handed. Indeed, she and her players keep us guessing and leaning in. Mescal, so brilliant in NORMAL PEOPLE, gives another keenly observed performance of a man-child with a fraught inner life and burgeoning insecurities. Corio is wonderful too, giving a wholly naturalistic performance that stands as one of the best youth performances in many a moon. She and Mescal have great chemistry together, and yet Wells always lingers a smidge longer on their expressions or pauses to suggest the tensions at play during their holiday.

Ultimately, in addition to being a shrewdly observed character study, the film might best be described as a mystery. Wells shows us a lot between these two but leaves plenty of holes for us to fill in. And without using any histrionics or big “events,” the filmmaker suggests that Sophie’s time with her father that week was a significant game-changer, a true shift in their dynamic together. Sometimes being a fly on the wall can be that intimate. And unsettling.

from The Establishing Shot https://ift.tt/e6HVKiR
via IFTTT