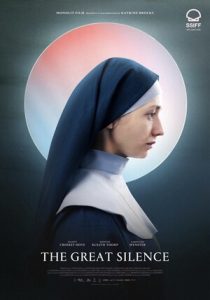 The new Danish film THE GREAT SILENCE (Den Store Stilhed) honors its title with a main character who doesn’t say a great deal, even though her stifled angst speaks volumes. Alma (Kristine Kujath Thorp) is about to take her vows in a convent and she’s trying desperately to suppress her traumatic historyand the residual guilt she carries. But the peace and calm of her churchly surroundings is not only usurped by her own frustrations, but by her ne’er-do-well brother Erik (Elliott Crosset Hove) as well. He shows up, unwelcome, to challenge her past, her position, and her very faith. It makes for an extraordinary character-driven drama and debut from Danish filmmaker Katrine Brocks, one of the standout movies at this year’s Chicago International Film Festival.

In a Q & A after the film’s North American premiere, a real coup for the fest, Brocks spoke of how she grew up in a Christian community and had mixed feelings about religion which compelled her to write a film about it. Along with her fellow screenwriter Marianne Lentz, and the talented cast and crew she’s assembled, the film not only manages to thoughtfully examine articles of faith, but err on the side, perhaps surprisingly, of endorsement. Unlike many films about religion, Brocks’ work eschews most of the negative clichés that abound, particularly as it examines Catholic dogma.

The positivity starts with Alma. She is in the convent for the right reasons, wanting to do good works and help those in need. It extends to Alma’s Mother Superior Miriam (Karen-Lise Mynster) as well. She may be stern at times, but throughout the ups and downs of Alma’s journey, Miriam is never the battle ax one might expect. She can be stoic, and firmly authoritative, but she’s driven by the same compassion that Alma exudes. And when Erik shows up, needy and distraught, the convent gives him a long leash, even when he creates havoc at a Sunday service. Never does the film condemn any of them. Instead, it finds the commonality and relatability in all.

There’s little dialogue in the film as Brocks prefers to let other elements have more say. The faces of each of the three leads communicate oodles more than pages of banter ever could, and the director lets sound design, the underscore, and her lighting communicate in spades. In fact, for a film entitled THE GREAT SILENCE, it’s remarkable how various sound effects, from leaking water drops plopping into a tin bucket to the gurgling of a Carlsburg beer being chugged, leave such an impact on the audience.

Equally affecting are the three main actors, all of whom give layered performances. Thorp is a real find, at times conjuring up thoughts of a young Ingrid Bergman and perhaps a touch of Maria Falconetti in how well she exudes palpable suffering. Erik never feels villainous due to the hurt etched in every look and action by the heartbreaking Hove. And Mynster creates a leader worthy of Alma’s admiration and allegiance.

Brocks never rushes a scene or overplays any of her symbolism. She shows superb technique in every frame, yet her camera work, editing, and soundtrack never feels strained or indulgent. Mostly, the director imbues her storytelling with nuances, sophistication, and thoughtfulness. She’s a real comer and I can’t wait to see what she creates next.

THE GREAT SILENCE plays again at the Chicago International Film Festival this Thursday afternoon, October 20th, at 3 PM. See it if you can there, or any other means thereafter.

from The Establishing Shot https://ift.tt/NKIeWCP
via IFTTT