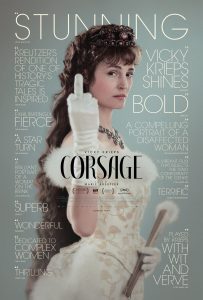 Filmmaker Marie Kreutzer weaves deliciously sly symbolism throughout her new period drama CORSAGE, starting with the very first images. She introduces us to Empress Elisabeth of Austria (Vicky Krieps) as an atypical queen, holding her breath underwater for over a minute during her morning bath. Kreutzer may be showing us an erratic royal but the symbolism is quite clear – this is a monarch who equates her station with suffocation. It’s a bold start for this fictionalized telling of the Empress’s life, and as the restless and dissatisfied Elisabeth, Krieps gives one of the year’s most vivid performances.

Elisabeth is a smart, sexual, and adventurous woman in a time and place where such women were rarely allowed to exist, and the drama of the film comes from the tension of how she fits in. Or doesn’t. The patriarchy just cannot accept such a progressive, especially her husband, Emperor Franz Joseph (Florian Teichtmeister). He is too narrow of imagination to embrace her spirit and spends most of his days and nights trying to avoid her. He’s consumed with his kingdom, and now that his wife is cresting into 40, he no longer can see her even as a comely ingenué. They barely have marital relations, let alone a marriage.

The Empress counters his dismissiveness in as many ways as she can, most of them quite rebellious, many of them exceedingly cheeky. She talks back to him, takes other lovers, and travels about the nation with little regard for calendar or protocol. She flips him the bird, mocks his rage, and calls the servants names like she’s bullying weaker kids on the playground. Indeed, Elisabeth covers a lot of terrains as she tries to figure out where she stands. She is hoping that something, anything, will make her feel alive, unrestricted, and wanted. She loathes the grind of her position and cannot abide all of the time she spends squeezing into corsets, making bogus, ceremonial appearances, and watching every crumb and calorie she puts in her mouth. Such constrictions take a toll on her and Elisabeth’s behavior starts to become more and more combative.

And as she looks to others for assurance, she finds only disappointment. Elisabeth’s riding instructor can’t get past her title, her cousin would rather spend his nights with men, and even her 8-year-old daughter is ridiculously obsessed with propriety. She can’t even enjoy a piece of cream cake without her own child chiding her about the potential weight gain. Indeed, the issue of Elisabeth’s weight amongst the royal court watchers is one of Kreutzer’s most cunning jokes in the film as Krieps is a stunning beauty in both figure and face. At one point, Kreutzer even has the empress try to seduce her husband by whipping back the covers to expose her fit, glorious nudity, and yet, it’s too much for the meek king. He sheepishly covers her back up, much to the chagrin of the irritated queen.

The fun of the film comes from how Kreutzer and Krieps zig rather than zag during the chronicling of the Empress’s plight. Elisabeth is shown here to be a feisty fighter, constantly strategizing to make a better lot for herself. Focusing on a single year of the queen’s life, in 1878, this biographical take showcases a budding feminist at the precipice. And if she sometimes talks or gestures like a woman from our modern era, or if the film’s music includes songs by Kris Kristofferson or the Rolling Stones, it’s all to illustrate how this Elisabeth is ahead of her time.

Krieps is a marvel throughout the film, one of the few actresses today who can hold the screen with her talent and luminescent beauty. Krieps shows us all of Elisabeth’s moods, worn right on her sleeve like an ornate stitch, and you root for her to find happiness even when you realize she’s fighting a losing battle. It’s one of the best performances of the year, on par with what Cate Blanchett does in TAR for my money.

Occasionally, Kreutzer’s script can feel on the nose –  much is made of everyone bathing in their sleeping gowns – got it, they’re all repressed. And Elisabeth is not above being a bit of a brat, but it’s a fascinating exploration of one woman’s misery and dissatisfaction, and it does almost as much as Peter Morgan has done in four seasons of THE CROWN so far in ripping royalty a new one. In fact, it’s surely not coincidental that so much of Elisabeth will remind audiences of the plight of Princess Diana. Both royals fought for basic decency in their treatment and rebelled against smothering men. Sadly, if you know your history, Elisabeth doesn’t get any better of an ending than Diana did, but Kreutzer turns the finale here into an upbeat moment with the Empress dancing to the music in her head. It’s startlingly symbolic, as so many images are in this clever and audacious film.

CORSAGE is a co-production between Austria, Germany, Luxembourg, and France, and is part of the foreign film competition at this year’s Chicago International Film Festival. It will be released nationwide in the United States at Christmastime. Indeed, Krieps is a gift as is this provocative film.

from The Establishing Shot https://ift.tt/YpAizbP
via IFTTT