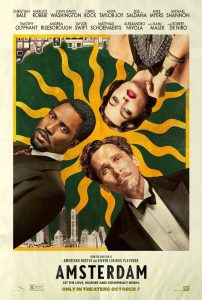 In AMSTERDAM, filmmaker David O. Russell has assembled the toniest cast in a movie all year, along with expensive production values, and a script with a timely message about fascism. If only the film was better. It’s part comedy, part mystery, part social commentary, all rolled into one, but it needed to be funnier, more thrilling, and less hectoring. It’s a noble effort, it’s also one of the bigger missed opportunities of 2022.

The film’s problems start with main character Dr. Burt Berendsen (Christian Bale). He’s got fright wig hair, a glass eye that’s always popping gout, and a Brooklyn accent just this side of Bugs Bunny. His cartoonish characteristics suggest AMSTERDAM is going to be broad comedy, but no one else pitches their performance as extravagantly, and the story that he’s in the middle of can’t decide upon a tone. One minute it’s trying to be farcical like his look, then the next a class study chock full of pathos. And that’s the first 15 minutes. Then the story takes a nasty turn and it’s attempts at fun start to sour.

Things get dark and ugly when Burt meets up with his old WWI buddy Harold Woodman (John David Washington), now a well-heeled attorney. They meet with Harold’s troubled new client Liz Meekins (Taylor Swift), who thinks her father and their former CO was murdered. Before you can say “glorified cameo,” she’s swiftly thrown under a speeding car by and killed. And Russell makes sure we see her crumple under the tires.

It’s vicious and garish, and Burt and Harold are pinned as her killers by the real thug who pushed her (an unrecognizable Timothy Olyphant under heavy makeup and a blond wig.) Suddenly, the guys are on the lam and off to figure out why Liz was offed. But Russell isn’t content with a whodunnit any more than he was with the start of a character-driven comedy. His script flashes back to a lengthy sojourn overseas during WWI and then the aftermath of the war in Amsterdam. In both locales, Burt and Harold become friends with progressive nurse Valerie Voze (Margot Robbie) and she and Harold even evolve into lovers. It’s full of exposition, but he feels like a different movie.

Russell is telling too many stories, adopting wildly varying tones, and it’s discombobulating. When the story resumes decades later back in the USA, Germany is on the precipice of embracing Hitler and Russell turns most of the remainder of his film into a heavy-handed political diatribe, albeit a timely one given what’s going on with autocracy fears in our current political theater.

Russell gets fine work out of Bale, Robbie, and Washington, but a lot of the other stars get stuck in one-note characters that aren’t particularly interesting or funny when they show up. Anya Taylor-Joy, Andrea Riseborough, Alessandro Nivola, Matthias Schoenaerts, Zoe Saldana, and Robert De Niro all try to look like they’re enjoying the attempts at romp, but the witty lines just aren’t there, nor is there even one inspired set piece to invite comparisons to the comedic excellence of the Marx Brothers, Blake Edwards, or Wes Anderson. Only Rami Malek makes a vivid impression as an elite businessman, but he too should have a lot more to chew on.

In films like AMERICAN HUSTLE and SILVER LININGS PLAYBOOK, Russell masterfully combined outrageous humor with pathos and tension, but here, his concoction has too many ingredients. Emmanuel Lubezki’s cinematography, Judy Becker’s production design, and the costumes by J.R. Hawbaker and Albert Wolsky are all gorgeous, but their beauty works against a story that’s supposed to essentially be a comedy. Sets and clothes that look like confections good enough to eat don’t quite fit with the graphic autopsies, war amputations, and running gags about errant glass eyes surrounding them. AMSTERDAM feels like many films all fighting each other. And none of them quite prevails.

from The Establishing Shot https://ift.tt/qhPfnwH
via IFTTT