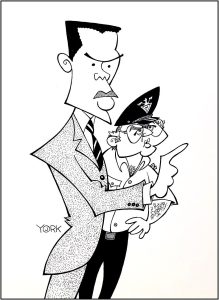 Original caricature by Jeff York of Sidney Poitier and Rod Steiger from IN THE HEAT OF THE NIGHT, featured in the new documentary SIDNEY. (Copyright 2022)

As I watched SIDNEY, the new documentary about iconic film star Sidney Poitier, I thought of what the Wizard told the Tin Man about hearts not being judged by how much one loves, but by how much one is loved by others. To say Poitier was beloved by those interviewed for this film is an understatement. To the dozens of peers, acquaintances, and showbiz types on camera here, Poitier was not just revered but idolized and worshipped. And it’s wholly understandable given Poitier’s impact on the movie industry, let alone America and the world.

Poitier was truly a gifted actor, and even more so, an incredible movie star, one who could hold the screen like few others. His effortless grace, assured physicality, and soft-spoken voice – that combination onscreen made him a mesmerizing presence in any film, in any scene. Poitier was also the first above-the-title, black male performer, paving the way for any other performer of color afterward to get a fairer shake at the brass ring. He started out making movies in the late 1950s but it was a decade later, at the height of the Civil Rights movement, that Poitier hit his stride. In many ways, he was as instrumental as Martin Luther King was, blazing trails and opening doors for Black America.

His greatest films were popular with audiences across the spectrum, and such legendary films of his like THE DEFIANT ONES, LILIES OF THE FIELD, TO SIR WITH LOVE, GUESS WHO’S COMING TO DINNER, and IN THE HEAT OF THE NIGHT have stood the test of time. Poitier has also been awarded every industry award possible, including two Academy Awards, the Kennedy Center Honor, and the American Film Institute’s Life Achievement Award. They’re here in SIDNEY but the documentary isn’t interested in the typical clip package. The filmmakers here have treated this one more like an oral history. Those who worked with Poitier and knew him best talk about what he meant to them on all kinds of personal and professional levels, and it gives this film real weight. SIDNEY ends up being a rich series of A-list testimonials to the actor in ways that standard bios on A & E or The History Channel couldn’t dream of.

One sterling example involves Poitier’s Best Picture winner from 1967, IN THE HEAT OF THE NIGHT. Sure, we see the legendary scene where Poitier’s detective Virgil Tibbs responds to being slapped by an affluent white bigot (Larry Gates) with a slap back. It’s a great moment, made all the more wonderful by Rod Steiger’s flummoxed reaction as Sheriff Bill Gillespie in the film. But what makes it have more resonance in SIDNEY is how it relies on the anecdotes of the likes of Spike Lee and Morgan Freeman telling of their own experience watching that in the theater with stunned audiences around them. They become giddy with laughter, and it’s contagious.

Director Reginal Hudlin gets a lot of singular tales like that on film here. And those talking are some of the toniest A-listers anywhere including Denzel Washington, Robert Redford, Halle Berry, Quincy Jones, and Barbra Streisand. Oprah Winfrey, one of the film’s producers, talks here extensively about her relationship with Poitier as both a fan and a peer. And even better than all of their thoughts on Poitier are those of the actor himself. Shot exclusively for SIDNEY, he talks directly to the camera and tells us about the good, the bad, and the ugly in his life. A childhood story about a cop holding a gun to his head feels all too relevant and it’s a heartbreaking moment.

Writer Jesse James Miller concentrates on many parts of Poitier’s life like that, those stories that most don’t know. Of particular interest were the details involving Poitier’s up-and-down friendship with Harry Belafonte. They have been lifelong friends and peers, true, but they’ve also argued and fought, leading to long gaps in their friendship. Another highlight of the doc showcases Poitier’s experience directing motion picture comedies. He had quite a life before dying at 94 this past January. Poitier even served as Ambassador of the Bahamas (his home country) to Japan from 1997-2007.

SIDNEY premiers on Apple TV+ today and it’s not only one of the best documentaries of the year, but it’s also one of the most insightful studies of an actor, his craft, and his effect on show biz and the globe. You’ll want to see his films after watching SIDNEY. And don’t be surprised if you want to watch this sterling documentary again too.

from The Establishing Shot https://ift.tt/jiEFVhJ
via IFTTT