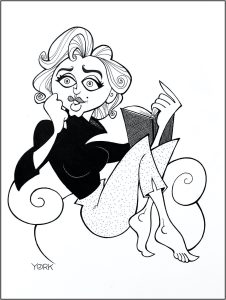 Joyce Carol Oates’ take on the life of Marilyn Monroe was not a straightforward biography, but rather, a melange of moments and experiences in the screen star’s life. The author burrowed deep into Marilyn’s psyche, interpreting the events that shaped her life and fed the trauma she suffered from for the 36 years she was alive. The way Oates told the tale may not have held together as historical fidelity, but her prose certainly captured what was likely going on in Marilyn’s head as she reacted to so much tragedy.

Andrew Dominik’s new film BLONDE is a screen adaptation of Oates’ book and it too eschews traditional biopic tropes. Gone is any easy A to B to C storyline, replaced instead by a focus on the big themes in Marilyn’s life: her quest to be accepted, respected, and loved. Anchored by a revelatory lead performance by Ana de Armas, BLONDE is a disturbing portrait of a fragile soul, used and abused from childhood on, living a life that was too often that of a waking nightmare. It’s a strange film to watch, both love letter and horror show, and yet like other fever dream biopics such as Pablo Larrain’s JACKIE in 2016 and SPENCER in 2021, it asks us to witness the unraveling of a woman’s life from inside her head.

BLONDE also reminded me of Dominik’s superb biopic from 2007, THE ASSASSINATION OF JESSE JAMES BY THE COWARD ROBERT FORD. The central character of that film was the famed outlaw, of course, a simple man having oodles of trouble handling his worldwide celebrity. Similarly, Marilyn could never quite fathom being the planet’s biggest movie star in the 1950s, and that mantel brought her as much misery as joy, all showcased in BLONDE.

But before she got to issues of global fame, the former Norma Jean Mortenson had to deal with plenty of other horrors. When she was seven, Norma Jean’s unloving mother (Julianne Nicholson) tried to drown her in the bathtub. Years later, Marilyn was raped during an audition by 20th Century Fox mogul Daryl Zanuck. And Marilyn’s marriage to New York Yankee’s slugger Joe DiMaggio (Bobby Cannavale) was no cakewalk either. His jealousy of her sexpot reputation led him to beat her and throughout all these scenes, Monroe’s anguish is palpable.

Indeed, BLONDE is often depressing, yet there are plenty of moments of beauty and joy to be found too. Chayse Irvin’s cinematography is stunning, showcasing Marilyn’s beauty, her exuberance, and the bright sunshine bathing LA. And when Marilyn aces auditions or scores points describing the deeper meaning of Miller’s prose to him over lunch, Irvin shoots such scenes in crisp black and white to emphasize how definitive such wins were for her.  The production design by Florencia Martin captures the period beautifully without it feeling too shiny and pristine. And composers Nick Cave and Warren Ellis contribute a score that runs the gamut from heavenly to heavy-laden with anxiety.

The supporting players all make strong impressions here as well, especially Lily Fisher as the young Norma Jean. Nicholson and Cannavale play their villain roles superbly, even managing to conjure some sympathy for their devils. And Brody portrays Miller as a caring and sensitive mensch, one of the few well-intentioned men in Marilyn’s life as presented here.

Of course, almost all of the success of the film boils down to how well Ana de Armas plays Marilyn and she thoroughly aces the part. It’s a vivid portrayal that showcases Marilyn’s sexual prowess, her little-girl-lost vulnerability, not to mention her shrewd intelligence and instinctive talents as a performer. Marilyn could shine in both drama (BUS STOP) and comedy (SOME LIKE IT HOT), and so too does de Armas here. And when Marilyn becomes consumed by drug addiction in the third act, de Armas makes the character absolutely heartbreaking.

At times in the film, such as when Marilyn tells us precisely what she is thinking, the script feels too on the nose. Some of Dominik’s symbolism gets heavy-handed too, especially the mysterious photo of the man who was supposedly Norma Jean’s father. At times, the character animates out of the picture frame and it feels cheesy. Thankfully, most of the rest of Dominik’s direction is sophisticated and nuanced.

BLONDE will likely be very polarizing as this kind of non-linear, POV storytelling can feel disjointed and erratic, but isn’t that in keeping with Marilyn’s life? BLONDE is a devastating portrait of sorrow, and as Marilyn gets put through the wringer, so do we. Dominik wants us to feel her pain. And boy, do we ever.

from The Establishing Shot https://ift.tt/knoiwft
via IFTTT