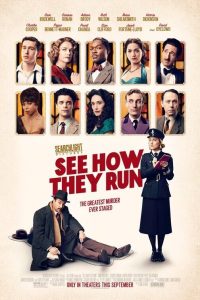 Funny, but for a movie that ostensibly should be all about Agatha Christie and her work, SEE HOW THEY RUN has very little of either. Instead, the film, whose plot concerns a murder set against the 1950s London backdrop of her long-running play The Mousetrap, feels quaint but dispassionate. The stakes feel low and so does the energy. At times, it feels less like an homage to the dame’s mystery aesthetic and more like a Wes Anderson period piece. The film can be amusing in its droll eccentricity, but it’s not much of a thriller.

Additionally, if you aren’t all that familiar with Christie’s long-running play that opened in 1952 and is still going strong, the film doesn’t go out of its way to help you. The machinations of the play’s plot rarely inform or overlap the mystery at hand in SEE HOW THEY RUN. Instead, what you get is a cute but not exceptionally clever backstage drama where someone has offed a sleazy, Hollywood movie director in town to try to procure the rights to the play. The cast is tony, and the production values divine, but it all felt like more than a missed opportunity than a mystery.

The film starts with a large misstep as that murdered director begins narrating the story and exclaims that if you’ve seen one whodunnit, you’ve seen them all. That’s wildly untrue, of course, but it feels like a slur on Christie who reinvented the mystery numerous times over. She always found ways to pull rugs that broke the mold and that was certainly true in The Mousetrap. Nonetheless, Hollywood director Leo Kopernick (Adrian Brody, in the film’s best performance) derides the genre and everyone whom he comes in contact with as he attends the play in the West End. It’s easy to see why his bellicose offenses would lead someone in London’s theater community to off him.

The potential suspects include David Oyelowo as the screenwriter hired to adapt the play for Kopernick, Ruth Wilson and Reece Shearsmith as the producers of the theatrical play, Charlie Cooper as a busybody usher, and Harris Dickinson as vain, lead actor Richard Attenborough. (The portrayal of the affectionately known “Dickie” as such is one of the film’s better jokes, albeit an inside one.) Constable Stalker (Saoirse Ronan) and Inspector Stoppard (Sam Rockwell) are summoned to solve the crime, and they are, as is often the cliché in such stories, an odd couple at odds with each other during the whole investigation.

Ronan gives the part her all as she essays an earnest yet shrewd newbie from Scotland Yard, sort of a British version of Frances McDormand’s cop in FARGO. Unfortunately, Sam Rockwell underplays his part so consistently throughout that his character never wholly registers. His investigator is supposed to be a world-weary veteran, full of secrets himself, but Rockwell doesn’t make him nearly entertaining enough. Part of the problem is that Rockwell is miscast, struggling with his British accent and seeming too wiry for the role. There must have been dozens of capable British character actors to play Stoppard – Hugh Bonneville, perhaps – so why they went with Rockwell who seems so out of place is a question for the director Tom George.

George has pacing problems as well, letting everything lag, from the quips to the violence. And he never creates the proper menace that even a comedic mystery should have by necessity. At times it feels like this film wants to be KNIVES OUT, but as hilarious as that movie was from beginning to end, it was also thrilling and contained a top-notch mystery. This effort doesn’t come close to that modern classic as George moves the pieces about without any of it coming close to resembling a crackling yarn. The wonderful Shirley Henderson shows up as Agatha Christie well into the film but she’s not given nearly enough to do. Why she wasn’t more of a main character in this from the get-go is a puzzle greater than anything presented here.

Christie fans are legion and while this film wants to honor her writing, it fails to create anything as innovative as she did. She usurped genre tropes constantly, whether it was having the narrator of the story turn out to be the killer or murdering an entire cast of characters. In The Mousetrap, the revelation of the true killer at the end of the play shocked and delighted audiences, but there’s nothing as titillating here. SEE HOW THEY RUN is all potential, without any proof found in its pudding.

from The Establishing Shot https://ift.tt/MPOx8r9
via IFTTT