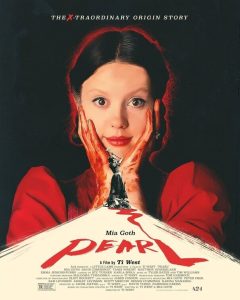 It’s rare that horror presents the opportunity for an actress tour de force. The film CARRIE provided Sissy Spacek with one, the same with HEREDITARY and Toni Collette. Now comes PEARL and it is a vivid showcase for the talents of Mia Goth. She’d already shown amazing range in this past spring’s X, a 1970s set frightener where she played both of the lead roles – Maxine Mink, a young porn ingenue, and Pearl, a septuagenarian serial killer. It’s a credit to her talents that most audiences were not aware that she was playing both roles until the final credits. Now, Goth is back playing PEARL in the prequel, a disturbing character study that shows just how the young woman turned into a homicidal maniac back in 1918. It’s chilling and even moving at times, thanks to Goth’s incredible performance. The story makes some mistakes, but Goth is flawless.

Telling a prequel is tricky, especially when we know what happens to the character down the road. Still, filmmaker Ti West makes a compelling story out of a simple farm girl with dreams of Hollywood who ends up rebelling against a world that rejects her. The story of PEARL starts in 1918 with America in the throes of the Spanish flu. Everyone is wearing masks and fearing the plague, and it’s hit Pearl’s farmhouse home especially hard. The flu has confined her father (Matthew Sunderland) to a wheelchair, now a motionless shell of his former self. Pearl and her strict, German mother Ruth (Tandi Wright) must take care of the invalid and it’s a thankless task as he must be fed, bathed, and wiped.

Pearl escapes the drudgery by dreaming of Tinsel Town. During errands run in town, she sneaks into the “picture shows” at the bijou, fantasizing that she’s a dancing girl on the big screen. (The period production values are splendid throughout, even the recreation of some Hollywood dance numbers.) When she returns home, Pearl playacts in front of the barn animals, much to Ruth’s chagrin. But the young woman is looking for some love and affection as not only is the farm a chore, but her husband is overseas fighting WWI. Pearl’s desperation builds and builds until finally, she starts acting out in the most overtly sexual and violent ways.

Her passions are shocking, but we can sympathize with the love-starved side of Pearl, masturbating in the barn and bedding the studly bijou projectionist (David Corenswet). However, when she starts slaughtering innocent barn animals and others, Pearl comes too close to being a wholly savage bully. At one point, she kills a squawking duck, and the scene and its aftermath are so unsavory that it almost stops the film cold. West shouldn’t be distancing us from her plight like that, especially when such kills aren’t necessary to advance Pearls’ story. Instead, his script paints her into a corner with a callous disregard for life. That makes us feel less sympathetic to hers.

Goth does her damnedest to make us pity Pearl no matter what, and her extended monologue explaining her inner demons and desires is a showstopper. Yet, a girl that self-aware should be a little less psycho, no? Goth keeps trying to show us the sheep in wolf’s clothing, but West wants it to be the other way around. He’s got a good movie here, with impeccable production values, and a gem of a lead actress, but by the end, I wasn’t sure I wanted to follow any more of Pearl’s story. Here’s hoping that he finds a way for her to channel her hate towards those who deserve it in future outings.

from The Establishing Shot https://ift.tt/bDfTVpE
via IFTTT