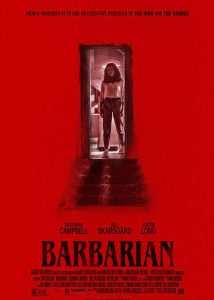 You know a horror movie is in trouble when the protagonist acts so stupid and puts themself in danger so egregiously that the audience starts to groan in disgust. Such a reaction occurred at least five times in the first 10 minutes of the new frightener BARBARIAN. It’s difficult for a movie audience to invest in such obliviousness. It’s why horror audiences started cheering for Jason Voorhees in all those FRIDAY THE 13TH  – his dingbat victims were too moronic to root for.

And yet, that’s exactly what happens at the start of BARBARIAN as documentary researcher Tess (Georgina Campbell) drives up to a shady Airbnb in a god-awful section of Detroit, almost completely oblivious to all the red flags around her. For starters, she’s not going to make a very good researcher if she fails to notice how the neighborhood is dilapidated and menacing.  Tess is in town for an interview and any decent company would have put up such a guest, but I quibble. More troubling signals appear as Tess discovers that her assigned key code doesn’t work. Then the landlord doesn’t answer her frustrating cellphone calls. And finally, there’s already a guest occupying the house. Keith (Bill Skarsgard, the killer clown from IT) greets her at the door and he’s hardly the trustworthy sort. He’s hesitant in his answers, stares at her constantly, and tries to ply her with an open bottle of wine. Still, Tess stays. Dumb.

What comes next from writer/director Zach Cregger doesn’t make Tess any smarter. She agrees to stay, finds her locked door unlocked in the middle of the night, and hears creaks and voices from below the floorboards. Sure, she wakes the next morning and aces the interview, but even after her new boss tells her not to go back to such a terrible place, Tess does anyway. And when she discovers a hidden passageway in the basement, one that leads to a dingy room with a video camera set up on a tripod, she still lingers in the building. And later, she burrows deeper into the bowels of the hell house looking for Keith.

Granted, from there, a number of shocking plot twists pop up throughout the rest of the story, including a hilarious Justin Long as a movie star character that at first seems to be in a whole different film altogether. As it’s eventually revealed, he owns the house and circumstances send him to Detroit to try to sell it. And – surprise, surprise – he ends up putting himself in far too much danger voluntarily as well, but at least his character is supposed to be dimwitted.

Watching any movie, especially one in the horror genre, requires a certain amount of suspended disbelief. The “Don’t go into the house” trope has been a staple of scary movies since the beginning of them, so one must go along with some lapses in logic. But still, when the main characters like the ones here just act dumber and dumber, oblivious to danger all around them, it’s deflating. Here, everyone trips too much, drops weapons repeatedly, fails to run when they have the chance, and fails over and over again to simply communicate clearly with each other to stay out of danger. It’s not screams of fear coming from the audience, but howls of protest instead.

In the second hour, the film almost turns into a parody of the “monster in the house” sub-genre and at least is amusing. It does get so loony though at times that it feels like Cregger is straining to make a dark comedy instead. The filmmaker does have some clear skills as he’s able to build suspense and raise the gore factor when needed for a hungry audience. But the sum of its parts does not a fine film make. I’m reminded of what the late, great Roger Ebert used to call the “dummy plot” which is boldly at play here. All of the drama could be cleared up in a matter of minutes if the characters on screen simply communicated clearly with each other, particularly about issues that are expositional. But Tess is so naïve, dunderheaded, and oblivious to all those red flags the first half hour, her stupidity turned my stomach; not the gore.

The better horrormeisters create smart protagonists that face clever threats in stories that don’t test credulity from the first second to the last. (Ripley in 1979’s ALIEN is just one example – she was a smart cookie battling a very shrewd monster.) Cregger does show promise here, but the things that he does well do not eclipse the basic errors in his storytelling. His outrageousness is more entertaining than his scares. But is that the reaction he’s going for in a horror movie?

from The Establishing Shot https://ift.tt/M5OGQuB
via IFTTT