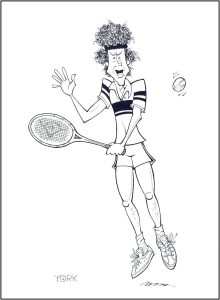 If you mention the name John McEnroe to the uninitiated, they likely know him as an outspoken tennis commentator, or perhaps even the outspoken tennis player who came to fame in the late 1970s. If you are among the initiated, or perhaps even a fan, you know that not only was McEnroe one of the most exciting stars to ever play the game, but his accomplishments on court speak louder than any outburst in his life ever could. He was a superstar, one more than worthy of a full-bodied evaluation like this documentary McENROE.

Recognizing McEnroe’s outstanding athleticism, and emphasizing that over any discourse he showed on the court, is just one of the great things about the new documentary from filmmaker Barney Douglas. ( It premieres Sunday night on Showtime at 7 PM ET/PT.) Douglas’ doc also clues us into its subject like few other sports documentaries. It really ‘gets’ the man, not only by coaxing all kinds of candor out of the 63-year-old legend, but it also shines a light on McEnroe’s struggles with the game, the fame, and the pressures placed on his mop-curled head in his late teens when he became famous.

Additionally remarkable is how the film is shot to match the moodiness of its subject. Douglas photographs McEnroe in low light, a stark setting and he showcases McEnroe walking around his old haunts in New York in the dark of night too. Indeed, those places indeed do haunt him, as he still carries the angst from some of the controversies and tragic memories that took place in such places. When Douglas shows McEnroe skulking about, he not only gets us inside his subject’s mindset, he gets us in his agitated, prickly skin.

The doc starts out by focusing on tennis in the 70s and how players like Jimmy Connors, Vitas Gerulaitis, and Ilie Nastase brought a rock star vibe to that world. They were flamboyant, edgy, angry young men, hardly the “Gentleman Jim’s” of the Stan Smith’s and Arthur Ashe’s who were also in the sport. These bad boys had some of Jack Kramer and Rod Laver coursing through their veins, sure, but they had just as much of Elvis and Marlon Brando. Then along came McEnroe, and he trumped them all in talent and attitude.

McEnroe was just 19 when he turned pro in 1978, something unusual in that day, and in no time, the upstart started to make the finals of the biggest tournaments in the world. But McEnroe couldn’t enjoy it as much as he should because he was driven to win at all costs, and his intensity and youth disturbed many of his fellow players. McEnroe tells how Jimmy Connors famously snubbed him early in his career, clearly threatened by Mac’s talent and youth, and it’s rather heartbreaking to seen the teen McEnroe so hurt by it.

Of course, as hard as the likes of Connors and the hounding press were on McEnroe, John himself was the most brutal. Brought up in a family that demanded perfection, McEnroe developed a keen sense of ego, as well as an unforgiving drive for excellence that often time pushed him to the brink of self-hatred. With our modern understanding of narcissism, insecurity, and family dysfunction, it explains a lot about why he was the way he was.

Along with all of McEnroe’s candor about his upbringing and events in his life, Douglas gives it even more portent by staying on Mac while he ponders or broods over such events. The editing knows when to cut away, but also when to linger. And yet despite all such moodiness, McEnroe comes across more often than not, as a rather likable guy, a survivor who’s sorry for a lot of his sins, and a man still working tirelessly to figure it all out.

For true tennis geeks, the doc showcases a ton of McEnroe’s greatest victories too and what made him the only male player ever to be ranked #1 in singles and doubles in the same year (1984), and accumulate an overall 81.7 winning percentage for the length of his professional career. It explains how the left-hander’s ability to volley and make stunning shots made almost every point he played genuinely exciting. And the film also proves that much of his famous temper was wholly justified. When he yelled the famous line, “You cannot be serious!”, McEnroe was as right as rain to call out the egregious ruling by a doddering line judge. His serve was clearly good as the flying chalk dust attested to in the clip featured in the film.

Douglas lets others speak for McEnroe as well. Bjorn Borg, Billie Jean King, McEnroe’s grown children, and his second wife Patty Smyth, the rock singer, all contribute insightful observations about the man. Smyth even calls her husband “a strange bird…might be on the spectrum with his heightened senses” which at first sounds like a criticism until you realize that it’s a loving understanding of his strengths and foibles, all rolled into one. (She also loves that he’s a math whiz, and has an incredible eye for art.)

What I admired most about the documentary is how Douglas showcases McEnroe as both a maverick in temperament and talent. Yes, he often personified that bad-boy celebrity, but like Elvis and Brando, he was an incredible artist too, a literal game-changer. McEnroe brought tennis to new heights with his intensity and physicality. He was a great strategist on court and one of its most nimble athletes too; a combination of chess master and jungle cat.

At one point in the documentary, McEnroe confesses that his greatest flaw is that he’s not empathetic. Interestingly, after watching it, I felt more empathy for him than ever before. The film shows us why he is the way he is, why he wears his passions on his sleeve, and why he gives such a damn about all he does. It’s a portrait to admire and, using a tennis term, in all likelihood love.

from The Establishing Shot https://ift.tt/n5s0WfO
via IFTTT