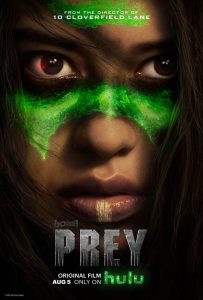 If you’re going to make a prequel to the PREDATOR franchise, it’s a clever notion to precede the time frame of the original 1987 story by some 300 years. Going way, way back would make the battle between humans and an alien predator even more terrifying as weaponry in the early 18th century of North America was nothing if not primitive. Even with prey such as the intrepid Comanche Nation and aggressive French trappers, the space creature would have a huge advantage. Not only would its 10 ft. tall frame dwarf any humans, but the space creature’s advanced weaponry would put all the bows, arrows, axes, and muskets to shame. That dichotomy is where the drama lies in this new sci-fi horror adventure entitled PREY and it’s worth a look as it premieres on Hulu this Friday.

The other element that makes PREY novel is that the lead here is a young, female warrior, straight out of the Disney heroine template. The entertainment company owns a majority stake in Hulu and their shaping of the material here is as noticeable as the bright, young actress essaying the lead. Amber Midthunder happens to be a member of the Fort Peck Sioux Tribe in real life, and she’s been acting in shows like LEGION and LONGMIRE for years. PREY, however, should elevate the 25-year-old to stardom as her performance as the teenage Naru is a truly striking one.

Naru wants to be like the male warriors from her tribe, out hunting and defending her people against interlopers like Grizzly bears or the French. Of course, she’s ridiculed for her dreams as is the trope in the world of Disney stories, but you know she’ll prove everyone wrong and become “part of their world” soon enough. Naru is as brave as any of the guys, and she’s a crack-shot with a bow & arrow too. She even has a dog sidekick, and it’s a sign of Disney discretion that he’s not played for laughs. He’s her brave and faithful companion who, thankfully, manages to stay out of harm’s way when the going gets really rough. It seems that only Naru and her pooch truly understand that the invader in their midst is way beyond any enemy they’ve ever encountered before.

The teen girl is not only as tenacious as her male counterparts, but she’s a smarter strategist as well. As she watches the predator slice and dice wild animals and men, Naru starts to pick up on the predator’s methods and the gadgets he’s using to conquer. She soon realizes that it can only be defeated if she takes away such advantages. Naru is both courageous and cunning, and Midthunder brings a steely focus and intimidating physicality to all she does with the part. That’s really her doing most of the running, jumping, climbing, and rolling around in the muck. In one tense scene, Naru gets stuck in some cold, thick quicksand, and Midthunder is in it for a penny and every pound.

Be warned, this film more than earns its R-rating, and the body count is substantial. Still, director Dan Trachtenberg never lets the violence become gratuitous and often cuts away before it becomes too graphic. He’s also good at ensuring the characters come through via both their words and actions. Screenwriter Patrick Aison occasionally writes dialogue that sounds more like modern-day snark than period banter, but by and large, his PREY story here is sharp, sincere, and full of genuine surprises.

Trachtenberg and his production team make the most of the Calgary locations too. The scenery is gorgeous at times and treacherous at others. Special kudos to cinematographer Jeff Cutter and editor Claudia Castello for their crisp, precise images, deftly cut, and easy to track. The only thing that comes up truly short here is that the alien creature remains far too, well, alien. He’s merely a monster here, a missed opportunity to give his character more motivation and even some empathy.

Of course, after 30-plus years of the PREDATOR franchise, one might question if we needed a prequel at all, especially given that genuine stories about Indigenous Peoples of North America are far too rare on the big or small screen. A fair point, for sure, and here’s hoping that this film becomes a hit and that doors will open to all kinds of additional stories. At the very least, PREY should encourage filmmakers to keep hiring Midthunder. She holds the screen like few ingenues can, and finds plenty of humor and heart in her fierce warrior. Midthunder even finds a delightful rapport with the dog. That’ll make audiences happy, not to mention the folks at Disney who greenlit this unconventional mix of brutality, teendom, and Disney motifs.

from The Establishing Shot https://ift.tt/WDPuSTh
via IFTTT