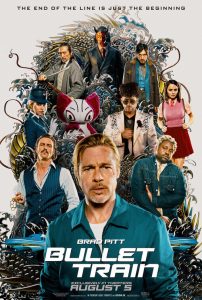 The new action/comedy BULLET TRAIN is a terrific film for 90 minutes. Unfortunately, the story goes on for another half hour after that, losing momentum and its focus. Still, up until the multiple climaxes and filmmaking excesses, it’s a hoot and a half. Well-acted, cleverly written, and shot with pizazz, director David Leitch’s hellzapoppin’ adventure grabs you by the throat in the first seconds and never lets go. He should’ve just released his grip after an hour and a half.

Brad Pitt, loosie and goosy here, plays an operative for an underground outfit that takes on all kinds of dirty jobs, from assassins to theft. His new code name is “Ladybug” and he’s not sure he likes it, but he’s trying to achieve a renewed sense of Zen after embracing the biz’s nihilism all his previous decades. He’s a last-minute fill-in for a ‘smash and grab’ job aboard a bullet train out of Tokyo. All he must do is find a briefcase onboard, steal it, and get off the train. Simple, right?

No way. Unbeknownst to our guileless guy who won’t even carry a gun, the train is filled with numerous thugs about to create complications for our hero. The miscreants include “Tangerine” and “Lemon,” two Cockney fixers (Aaron Taylor-Johnson and Brian Tyree Henry); a Russian mobster’s ne’er-do-well son (Logan Lerman); a conniving teen (Joey King) in a bubble gum colored ensemble; Kimura (Andrew Koji), a vengeful underworld figure; and a few other baddies who’ll board the sleek train along the way. Oh, and there’s a poisonous snake in the cargo bay too. He feels right at home in such company.

They’re all connected in various ways and will encounter that errant briefcase as well. The fun of such mayhem comes in watching these scumbags attempt to best each other, and any resemblance to films like those by Guy Ritchie or Quentin Tarantino is purely intentional. And indeed, for a good part of the time, BULLET TRAIN matches those films with its gonzo energy, quirky characters, and profanely funny dialogue.

Yet, when everything is played at an 11, where can it go? There are a few peaks and valleys here, but the frenetic pace becomes everything, everywhere, and all at once. Pitt grounds it some by underplaying, but he’s the only real relief. And as identities get mistaken, numerous fights break out, and people get tossed about the train and off it too, all while bodies pile up, Zak Olkewicz’s screenplay turns maddening. Soon, the film wears out its welcome as characters become preachy, too many new faces are introduced in the final reel, and a lot of people die, but don’t really. The reasoning? What’s another silly rug pull amongst two dozen of them already?

Leitch makes it all look slick, the cinematography and production design gleam and Taylor-Johnson and King stand out in support. But in the final 15 minutes, as the train hurls towards its overly bombastic and bloody climax, I wondered why this quirky caper film had to go on so long and conclude with so much broadly executed and expensive CGI. Who needs all that excess when Brad Pitt is your lead? Isn’t he a special enough effect?

from The Establishing Shot https://ift.tt/6IbHJd2
via IFTTT