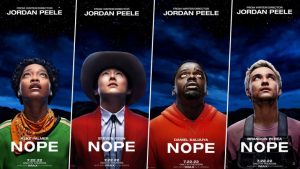 Writer/director Jordan Peele has set out in his film career to truly elevate the genre of horror, make it more intelligent, and use it to comment on society’s ills. He did so successfully in both GET OUT and US, but in his latest, he tosses a lot of clever ideas into the mix, as well as some inexplicable ones, and the film loses focus. Ultimately, it fails to hold together properly and stalls being as frightening as it should be. A predatory UFO, a homicidal chimpanzee, the pitfalls of show biz, animal rights, Civil Rights, cultish followings – vivid topics all, but they never quite coalesce together. By the end of the film, I was left scratching my head when I should have been on the edge of my seat.

It’s a shame too because the first hour is incredibly compelling, and the first five minutes alone are as unsettling as any film in many a moon. Those first moments concern the aforementioned chimp who wanders around the set of a TV sitcom after a horrendous attack, his mouth and fists drenched in blood. A female body lies prone nearby and one of her discarded shoes stands on end. It’s horrifying. Then the monkey gazes at the camera, filled with contempt, and we wonder what will happen next. It’s weird, audacious, and positively chilling.

We’re then transported 30 years or so into the future to a horse ranch in the mountains outside of Hollywood where trainer OJ Haywood (Daniel Kaluuya) and his father Otis (Keith David) notice disturbances in the sky, followed by stray brick-a-brack raining down on them. A spare key stabs one of their horses and a nickel falls into Otis’ eye, lodging into his brain. A few minutes of screen time later, and Dad’s dead. It too is chilling. So far, so good.

For the next 45 minutes, Peele slowly starts to connect the dots. He introduces OJ’s ambitious and combative sister Emerald (Keke Palmer) who steps in to help the family business after dad’s passing. Peele also fleshes out the story about that 80s sitcom, catching up with surviving child actor Jupe (Steven Yuen). He’s now a cynical adult cashing in on his notoriety by running a cheesy western theme park not far from the Haywood ranch. Jupe also is using some Haywood horses in his Wild West show and seems to be aware of the UFO phenomenon in the nearby mountains as well. The strands of all Peele’s stories here start to come together for a moody mix of anxiety, anticipation, and character-driven comedy. (Palmer is a stitch with her blunt mouth and sassy sexuality.) It all plays.

The second-hour fritters away too much of all that set-up. The tension starts to drain away too as Peele spends oodles of time on broad comedy with Emerald and Angel (Brandon Perea), a nerdy big box store clerk (Angel Torres) clumsily helping them set up video equipment to tape the UFO occurrences. The flying saucer also becomes less and less spooky the more it’s shown. And Jupe’s secondary story gets wholly shortchanged, especially when we spy his sitcom sister in attendance at one of his Wild West shows. She appears to be horribly maimed from the monkey’s attack decades earlier, but she doesn’t get a line or a scene to fill in the blanks.

The production values are terrific throughout, and Kaluuya makes for a compelling and brooding lead, but the second half of the story feels more silly than anything. A legendary cinematographer (Michael Wincott) helps them film the UFO but his erratic behavior feels quirky for quirk’s sake and his inclusion in the narrative goes nowhere. Additionally, a TMZ reporter shows up on a motorcycle to cash in on the UFO sightings, but his introduction remains all the more silly as he’s hidden under his helmet the whole time. Such choices feel arbitrary and mar all the dread the first hour built up.

Peele is a major talent, but NOPE doesn’t feel disciplined. Some of it is fascinating and frightening, but too much of it is frustrating. And when a scary movie stops being so and drifts into incoherence and the nonsensical, it’s confounding. Peele’s squandering of such good material was the most disturbing part of his film.

from The Establishing Shot https://ift.tt/10jSKUm
via IFTTT