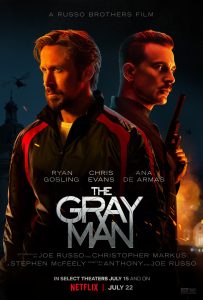 It has been said that Bond movies are only as good as their villains. Generally, that’s accurate as the better ones (GOLDFINGER, CASINO ROYALE) had distinctive baddies. The same could be said about the three big Netflix tentpoles made over the last three years, all with Bond-ish storylines and franchise aspirations. 6 UNDERGROUND and RED NOTICE didn’t have particularly strong villains and suffered accordingly. Meanwhile, THE GRAY MAN, Netflix’s latest actioner opening today, has a wonderful one played by Chris Evans. In this spy tale, Evans plays such a delicious bad guy that he manages to make up for many of the mistakes on display in this big-budget adventure.

Netflix has spent a lot of money trying to equal the kinds of blockbusters Hollywood used to release every weekend in the summer, and they’re getting better at it even if their learning curve has been steep. For THE GRAY MAN, they hired Marvel Cinematic Universe veterans Anthony Russo and Joe Russo (AVENGERS: END GAME, CAPTAIN AMERICA: CIVIL WAR) and they bring their vivid blend of action and comedy to the streaming service. (Joe Russo also wrote the script, along with fellow scribes Christopher Markus and Stephen McFeely, based on the book by Mark Greaney). The Russo’s know how to put a lot of story, characters, and effects on the screen, and they’re experts at assembling sharp actors to bring it all to life.

Ryan Gosling headlines here as Sienna Six, a brooding CIA spook with a license to kill, who angers his bosses when a mission goes sideways. Six manages to assassinate his target, sure enough, but he walks away with a secret jump drive from his victim that lays out all the corruption of their bosses. Rege-Jean Page plays Carmichael, the agency bureaucrat who now wants  Six dead and the drive retrieved. To get the job done, Carmichael brings in freelance killer Lloyd Hansen (Evans) to do his dirty work and that’s when the fun starts.

Evans has played snarky bad eggs before, like in KNIVES OUT a few years back, but his villain here is such a vicious hoot, he makes it all percolate even in those moments when things start to drag. There are too many fight scenes where a lot of punches are exchanged, but little is accomplished, including a number with Hansen. Thankfully, most of Evans’ scenes have him strutting about, lording his position over underlings and throwing about one acidic quip after another. Hansen is a buff peacock who fancies colorful polos and white jeans which look ridiculous amongst the suits and black ops he’s commanding.

But while the Russo’s let Evans maximizes every moment he has in the show, they fail some of the very good actors in support. Page plays exactly one note as Carmichael – pompous anger – and it becomes boring the longer the adventure goes on. The Russo’s don’t do well by Ana de Armas either. Her female lead is written far too generically, and de Armas struggles to make much of the part. She made a much more vivid impression in a similar role in just 10 minutes of screen time in NO TIME TO DIE last year. Accomplished actors like Billy Bob Thornton, Jessica Henwick, and Julia Butters do decently, but their parts are underwritten as well.

Additionally, the two leads don’t have nearly enough time together onscreen, and when they do, their extended fighting is so by-the-numbers that it’s almost a drag. The Russo’s seem far too content here to trot out a lot of action that lays waste to cities across the globe, but all that mayhem isn’t as fun as they seem to think it is. One set-piece that plays like gangbusters has Six trying to defend himself against a horde of hit men while handcuffed to a railing in downtown Prague, but too many other scenes lack such cleverness. And why do so many of the visual effects look cheesy? The budget was reported to be $200 million, so why such shortcomings in the production values?

I think the Russo brothers are terrific filmmakers, and their previous successes may have raised expectations sky-high, but this one misses greatness outside of Evans. Will Six become the next James Bond and helm a franchise? Doubtful. Still, if it does, I hope they find a way to bring Evans back. No matter who the villain is, can he play all of them?

from The Establishing Shot https://ift.tt/EC2g9tQ
via IFTTT