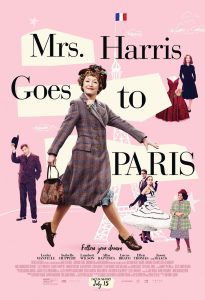 It’s a hoary cliché to say, “They don’t make ‘em like they used to,” but there may be no better way to describe the new comedy MRS. HARRIS GOES TO PARIS. It feels like the kind of adorable period pieces Miramax used to make 30 years ago such as IL POSTINO or CHOCOLAT, if not the kind of breezy romances from the 1950s those movies themselves were emulating. No matter, a charmer is still a charmer and MRS. HARRIS is exactly that, just the sort of entertainment this summer could use, especially one as fraught as this one.

Adapted from the 1958 novel Mrs. ‘Arris Goes to Paris by Paul Gallico, the story concerns a 1950s English cleaning lady who becomes obsessed with a couture Dior dress and embarks on an adventure to Paris to procure one for herself. The original novel, and the very way Gallico chose to title it with a dropped H, leaned heavily into caste system commentary but the story here is far less political. Instead, director Anthony Fabian, who adapted the script with Carroll Cartwright, Keith Thompson, and Olivia Hetreed, concentrates on the fizz in the fun.

The froth lies in watching working-class Ada Harris (Lesley Manville) try to live a bit like the well-to-do women she cleans for each week. She needs a lift too, considering her husband never came back from WWII and her daily habits have become a bit too pat. Therefore, Mrs. Harris decides to strive for something unexpected at her station, a small taste of the fancy life she only observes. She gets it into her head that she wants to go to Paris to buy her own couture dress, one that she can proudly wear for special occasions back home in London.

The problem is that Mrs. Harris doesn’t have a lot of money saved and part of her adventure here concerns how she sets out to gather funds to make it possible. And as her quest begins, it’s one chock full of plenty of obstacles. For every step forward she takes, fate seems to set her back a few paces. When she attempts to turn her meager savings into bigger winnings at the track, she unwittingly bets on a greyhound she likes rather than one that can win. Mrs. Harris is not deterred, however, and she not only remains optimistic that other chances will come along, but she’s positively tenacious in her approach to trying again and again.

One of the things that renders Harris’ story so appealing is how full of spunk she is no matter the ups and downs. And as she continues to keep at it, the fates almost seem to be rewarding her pluck by lining up the stars just for her. Soon enough, Harris has the moolah and is off to Paris, but the terrain doesn’t get any smoother there. She runs into problems at the fashion house, butting heads with various big-wigs in its employ, including the haughty showroom manager Claudine Colbert (Isabelle Huppert, steely and formidable as always). Harris also gets sidetracked by various Parisians crossing her path and soon finds herself involved in the lives of a sweet model Natasha (Alba Baptista), her love interest Andre (Lucas Bravo), and French marquis (Lambert Wilson). Harris makes friends with almost everyone she meets, suggesting that like Dorothy during her trip to Oz, the joy is in the journey more than the prize she’s seeking.

The casting of Manville gives Harris’ plight appropriate gravitas as well. The veteran actress adds poignancy to the character’s plight and suggests genuine pain coursing through her loneliness. And while Manville may be essaying a working-class heroine, she brings plenty of the refined elegance she’s essayed in so many of her more upper-crust roles to the proceedings here. Additionally, she plays Harris as quite savvy, suggesting that while the charwoman may be a fish out of water in Paris, she is nobody’s fool.

Manville’s castmates are clearly having a blast in their roles as well, especially Baptista (a real comer) in Paris and Jason Isaacs and Ellen Thomas as characters back in England. Just as impressive is the crisp cinematography by Felix Weidemann, the candy-colored costumes by Jenny Beaven (She loves plaid and you will too!), and the exacting production design by Luciana Arrighi. This film is nothing if not a visual feast as Paris comes off like a sumptuous box of bonbons. Indeed, the film may do more for French tourism than any movie since 2001’s AMELIE.

Rael Jones’ immersive score does wonders too, adding to the mix yet never ladling on the syrup. And at the end, when all is said and done, don’t be surprised if you’re not only struck by how delightful it all was but by the sheer audacity that it got made at all. It’s almost unheard of, in this day and age of tentpoles and franchises, to see such a sweet little picture done for movie theaters. MRS. HARRIS GOES TO PARIS is a story about fashion that feels triumphantly out of fashion with the overblown norms of today’s filmmaking. It’s a film that wears its earnestness as well as its quiet confidence on its sleeve, and it’s a good look for the cinema.

from The Establishing Shot https://ift.tt/3zvwVN2
via IFTTT