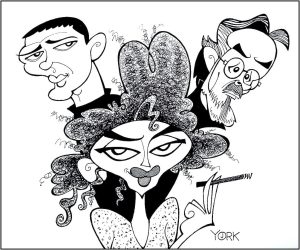 Many movies have savaged filmmaking from Billy Wilder’s SUNSET BLVD to Robert Altman’s THE PLAYER to Quentin Tarantino’s ONCE UPON A TIME IN HOLLYWOOD. The new Spanish Argentine feature OFFICIAL COMPETITION, opening July 1 in Chicago, joins a long list of such satires that struck bullseyes aiming at obvious targets like egotistical directors and clueless actors. It does, however, lampoon something much more unique this time – the rehearsal process. By concentrating on how a director and her actors prepare for a film before the cameras roll, this dark comedy directed by Gaston Duprat and Mariano Cohn feels fresher, funnier, and even novel.

Penelope Cruz, as intense here as her mane of wild, orange hair here, plays Lola Cuevas, an eccentric auteur hired by aging businessman Humberto Suarez (Jose Luis Gomez) to adapt and direct a Pulitzer Prize-winning novel. Suarez wants something more lasting as his legacy than just being a titan of business. He thinks producing a hit movie will do the trick so he hires Lola and gives her carte blanche to make her art. He’s in trouble from the start though as at their very first meeting together, Lola tells Suarez that she doesn’t plan to stick too close to the book. She has her own take on it and thinks nothing of rewriting a great work to satisfy her ego. Cruz is wise to play her part straight, as the screenplay by Duprat and Cohn, along with fellow screenwriter Andres Duprat, will do most of the outrageous heavy lifting.

Shortly after, Lola casts two actors as her leads and they couldn’t be more different from each other. Felix Rivero (Antonio Banderas) is an action superstar, one who’s become lazy and entitled, too busy enjoying the perks of the business (hot girls, expensive cars) to worry much about his craft. Meanwhile, actor’s actor Ivan Torres (Oscar Martinez) comes from the stage and academia, a thespian so full of himself that he cannot help but immediately condescend to both Lola and Felix upon just meeting them.

As the rehearsals start, Lola is clearly obsessive/compulsive, ruling with an iron fist and handing each of her leading men a script packed a foot thick with her notes, sketches, and ideas on how they should build their characters. Wedged in between the pages are everything from toys to food to large clumps of hair. Matters get even worse when the three sit at a table for the first cold read-thru and Lola barely lets either actor utter their first lines before she’s started critiquing their performances. She’s particularly hard on the prideful Ivan who insists he’ll give it his all in the performance for the camera. That’s all but sacrilegious to Lola, however, as she wants him to go over every utterance with him until she’s happy with his interpretation of the character. Clearly, the “official competition” that the title refers to is less of the Cannes Film Festival and more of the battle set up in rehearsal between these three egomaniacs vying for the title of the truest alpha.

As the rehearsals continue on over days and weeks, Lola’s style continually clashes with the two men. In one of the funniest scenes, the director auditions Diana (Irene Escolar), an actress vying for the female lead, instructing her to make out with first Felix and then Oscar, testing for chemistry. Lola criticizes the make-out technique of both men and steps in to show how to properly kiss Diana. As their mashing goes on and on, the two end up grinding on the floor as the lead actors watch aghast. It’s not only outrageous at the moment, but sets up Diana to become Lola’s lusting lover in real life as well.

Cruz, Banderas, and Martinez are having a ball here, relishing the opportunity to take the piss out of the ‘types’ they’re playing. Each of them drolly underplays, and are crackerjack at doing the physical comedy as well as the wordplay. Particularly amusing is watching the two men play up the little boys deep inside their characters. As the rehearsals continue, each becomes more and more obsessed with showing up the other, leading to some nasty twists and turns in the narrative that are as shocking as they are hilarious.

Their increasingly diminished stature during the rehearsals is emphasized even more by Duprat and Cohn’s penchant for shooting their cast dwarfed by their surroundings. Lola’s rehearsal space is a huge, modern gallery space and the way the filmmakers use its vastness to add to the humor reminded me of how the late, great Blake Edwards always used settings to make more of any bit. In comedy, context is everything.

Daringly, OFFICIAL COMPETITION never shows any of the actual film that Lola eventually will shoot. Instead, the final act takes place at Cannes with the film’s premiere, but there again, the audience is shown none of the finished product. It’s another choice on the part of Duprat and Cohn that gives this riff on show biz such a breezy, new feel.

Interestingly, the movie works just as much as a ‘work comedy’ as it does as a satire on show biz. After all, Lola is nothing if not the worst kind of tyrannical boss, driving her employees mad as they struggle to make sense of her horrendous demands and wicked head games. Such a story is eminently relatable. It’s damn funny too.

from The Establishing Shot https://ift.tt/w3JrhZo
via IFTTT