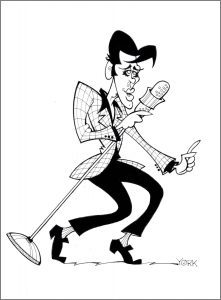 There’s a lot of excess in ELVIS, director Baz Luhrmann’s new biopic about Elvis Presley. Gleaming cinematography that practically glows in the dark, simple exposition scenes cut like they’re from an action picture, and Tom Hanks channeling Foghorn Leghorn by way of the Netherlands as Elvis’ manager Colonel Tom Parker. The film also has a lot of love and respect for Presley and in young actor Austin Butler, an ideal vehicle to essay the legend. The whole shebang is messy and exhausting, yet it’s also exciting, sexy, and even poignant. Luhrmann has crafted a love letter to his subject, a cautionary tale about fame, and a hellzapoppin’ show that has as much sweat, zeal, and sequins as any onesie worn by “The King” himself.

And yet, what was Presley’s life if not one of excess? The early gyrations that got him into so much trouble, the dictatorial control of Parker over all aspects of the performer’s life, and the druggy illusions of Presley’s final years – – perhaps such crazy material demanded the over-the-top panache of a filmmaker like Luhrmann. The Australian and his co-screenwriters Sam Bromell, Craig Pearce, and Jeremy Doner cover the Presley’s life from cradle to grave with as much glitz and glamour as they can, and yet what comes through the most, despite all the bombast, is the talent of Presley, his vulnerability, and his sweetness.

Much of that credit goes to Butler, who does a vivid job channeling Presley. He’s got the voice and swagger down, and he even does most of his own singing through the film. (In later scenes, he lip-syncs.) More importantly, the 30-year-old Butler captures Elvis’ tender effect, his sly carnality, and painfully gullible naivete. And in Presley’s later years, when the fortysomething rock star was starting to lose himself to pills and paranoia, Butler makes every painful moment heartbreaking.

Tom Hanks, on the other hand, struggles to make Parker more than a chicken-fried caricature. Parker seemingly ruled with an iron fist, but here it feels ham-fisted. Parker comes off like a gnat, buzzing about, being more irritating than shrewd. It doesn’t help matters either that there’s far too much of the character in the film. At times, it seems like it’s his biopic more than Presley’s. Luhrmann overplays his contempt for Parker throughout too dropping hoary music cues like “caught in a trap” from “Suspicious Minds” to emphasize the lengthy Vegas contract Parker committed his client to honor. Surely, the colonel had to be a more clever or even caring man than the blubbering oaf that Luhrmann, et al. present here.

Luhrmann makes other mistakes in the film too, glossing over key parts of Presley’s life. There’s almost no time given to his film career – where’s Ann-Margaret? – and a lot of the music feels like incidental background natter on the soundtrack. The film also omits Presley’s notorious White House meeting with President Richard Nixon and fails to make much of the 24-year-old Elvis’ courting of Priscilla (Olivia DeJonge) when she was just 14. And yet, despite such narrative missteps, the film does an evocative job of recreating many of the rock n’ roll star’s most noteworthy performances, from his early days in the 50s to his comeback TV special in 1968. And what would a Luhrmann film be without stunning production design and utterly gorgeous clothes? Luhrmann’s wife Catherine Martin handles the costuming for him once again and demonstrates why she’s one of the best in the business.

Luhrmann slows down the drama occasionally, like when Presley is at home arguing with his parents (Helen Thomson and Richard Roxburgh), but most of the time the pacing is a breakneck pedal to the medal. Luhrmann has flair to spare but he didn’t need to turn every moment of Presley’s life into a caffeinated cacophony of sight and sound. So much of the film is fun, moving, and exhilarating; if only Luhrmann hadn’t over-indulged as much, going for broke at every turn. He’s caught in a trap, and it’s one of his own making.

from The Establishing Shot https://ift.tt/vUA0hmW
via IFTTT