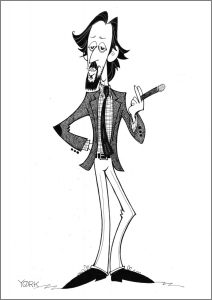 In filmmaker Michael Glover Smith’s new family dramedy RELATIVE, everything is indeed relative. A college student’s casual indifference to his own graduation party, a Type A daughter’s concern over how to tell bad news to her parents, an aunt’s mistaking her nephew’s new girlfriend for his old one – they are all relative in the up and down world of David and Karen Frank. And, as their family gathers for a weekend at their Victorian home in Rogers Park, we in the audience are invited to join them as virtual flies on the wall. It’s an intimate portrayal of three generations of family, full of laughter, grievances, rituals, and numerous bottles of wine. And any relation to your clan or mine is purely intentional.

Sixty-ish David and Karen (Francis Guinan, Wendy Robie) are looking forward to their graduating son Benji (Cameron Scott Roberts) leaving the nest to start his new life working for Google. If only they could get elder son Rod (Keith D. Gallagher) to show the same gumption. Since his camgirl wife Sarah (Heather Chrisler) divorced him, the unemployed, former soldier piddles away his days playing video games, getting high, and paying money to watch his wife perform online. The Frank’s two daughters have issues too. As Evonne (Clare Cooney) and her lover Lucia (Melissa DuPrey) roll into town from Madison, WI with their adopted daughter, it may be their last as a couple. And Norma (Emily Lape) arrives without her husband and child, making convenient excuses about their absence and muttering about family disintegration.

That’s a lot of potential angst for one family weekend, but Smith isn’t interested in flashy, soap opera confessions or fireworks. Instead, the writer/director is more intrigued by how families cope with their baggage and carry on despite such problems. What do they share versus what they don’t? What lies do they tell, even to themselves? Some of it is sad. A lot of it is funny. Almost all of it is relatable.

Evonne, the Type A daughter, gives off an air of cool confidence, but deep down, she is racked with panic. Benji seems to like his kin but then he goes out of his way to avoid connecting with them to the point where he brings a girl to the party that he just met. It’s easy to see why, given that Hekla (Elizabeth Stam) is a young actress oozing charm and confidence, but what does the young man truly think of his family? Smith asks a lot of intriguing questions, yet only gives so many answers. The human condition is undeniably a mystery.

Smith’s characters tend to say as much in their pauses and injured looks as in all the realistic-sounding, lived-in dialogue that he’s written for them. The director clearly loves his actors too and gives them all multiple opportunities to shine. Robie is a delight, alternatingly droll and sprightly, while Guinan gives his character a warmth as comfortable as a worn slipper. Stam is a true find and a first-class scene-stealer too. She essays every theater major this side of Northwestern perfectly.

As much as Smith loves simply watching two characters get stoned together or two people enjoying their first kiss together, he seems reticent with his camera and outside of one or two flourishes from cinematographer Olivia Aquilina, most of his framing is a bit staid. The film feels like it’s missing reaction shots too, but that may be as much a reflection of the indie’s limited budget as the director’s prerogative. (The cost of this film is probably less than it costs to stock Robert Downey’s fridge in his trailer for the next SHERLOCK HOLMES production.)

Few filmmakers dare even tell a story as modest and character-driven as this one in the age of zillion-dollar tent poles and franchises, and such a film is always welcome. Ultimately, Smith’s fourth film, showing this Wednesday and Thursday at the Gene Siskel Film Center in Chicago, as well as a few other local theaters, reminded me a lot of Lawrence Kasdan’s 1983 classic THE BIG CHILL. There too a group gathered for a weekend and realized that their real lives didn’t quite line up with their best hopes for them. In RELATIVE, the reunion of the Franks forces most everyone to realize that change can be good or bad, sometimes funny, sometimes a little pathetic, but no matter, it’s very hard to go home again.

from The Establishing Shot https://ift.tt/pOKT3nv
via IFTTT