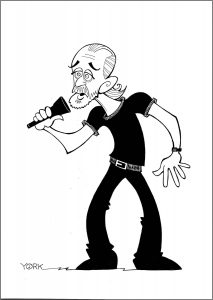 Stephen Colbert suggests in the new HBO Max documentary GEORGE CARLIN’S AMERICAN DREAM that the legendary comedian was like the Beatles to his generation of comics. Colbert is right as not only was Carlin’s effect on standup as revolutionary as the Beatles were to rock & roll, but like the Liverpool lads, Carlin was able to reinvent himself for the changing times. The two-part, four-hour doc showcases all of the icon’s incredible career across 50 years and shows sides of him that most have never seen before including the earliest incantations of the legendary comedian, as well as intimate details of his personal life. It’s one helluva story.

It may surprise most as well to realize that the upstart comic, famous for his routine ‘The Seven Words You Can Never Say on Television,” started as a suit & tie jokester imitating other standups on THE ED SULLIVAN SHOW in the mid-60s. He was good at it, but the clips of the buttoned-down Carlin are almost shocking. For a few years there, he even partnered with fellow comic Jack Burns to do situational, character-driven sketches on stage. And even though Carlin was building a solid comedic reputation, he felt suppressed by such conventional approaches to humor. Itching to give convention “the bird,” Carlin reinvented himself as a long-haired, bearded hippie who would take on the establishment.

Carline hit paydirt, speaking to a younger generation and taking shots at taboo topics like religion, drugs, and the Viet Nam War. By the early 70s, he’d become not only wildly popular but a household name as well. His controversial comedy albums like “Class Clown” were huge with young people from 13 to 30. Carlin lived on the edge, getting arrested for obscenity in Milwaukee, fighting the FCC in court, and smoking joints before he’d go on stage. He became a phenomenon, selling out concert halls, and becoming rich off of comedy albums that went platinum. Carlin also paved the way for other edgier comics like Richard Pryor, Steve Martin, and Andy Kaufman.

But as Carlin became a star, he struggled to keep things together in his personal life. Being away from his wife Brenda and daughter Kelly took a heavy toll on his attitude, and he turned to drugs to feel better. So did Brenda. The documentary digs deep into their relationship, including their drug use, but their love story shines through even during the darkest parts.

The doc, directed and produced by Judd Apatow and Michael Bonfiglio, benefits greatly from old clips, BTS footage, interviews with daughter Kelly, Carlin’s management team, and vaulted comics like Patton Oswalt and Chris Rock. One of the best clips Apatow and Bonfiglio got their hands on was Carlin’s appearance on THE MIKE DOUGLAS SHOW in the 70s when John Lennon and Yoko Ono co-hosted. You can tell that they loved Carlin and that he loved them too.

The doc logs how Carlin’s material went from edgy material making fun of Nixon and the war on drugs to softer, more observational humor, often involving the dissection of language. Carlin enjoyed ribbing the world of marketing too, making fun of ‘adspeak’ and that industry’s often garbled syntax. But as the 80s got underway, Reagan, Bush Sr., and the conservative movement in America really started to get to Carlin. The new “greed is good” motif really stuck in his craw, and he decided to do something about it.

Carlin came out swinging in the late 80s and 90s, full of piss and vinegar. To watch the clips in the doc of Carlin stomping around on stage, raging about the hypocrisy of America, jabbing the air with his finger, cursing like a longshoreman, it truly is a sight to see. Carlin all but spits fire as he describes how America loves “bombing brown people.” His bile continues as he rips the conservative movement for being “in favor of the unborn, but once you’re born, you’re on your own!” The comedian skewers pro-lifers, calling them “obsessed with the fetus from conception to nine months, but after that, they don’t want to know about you.”

The rest of Carlin’s story, both professionally and personally, gives the fourth hour of this documentary both bite and poignancy. Watching GEORGE CARLIN’S AMERICAN DREAM will dazzle his fans and newbies alike, and inspire the viewers to watch or re-watch his classic standup material.  Might I suggest “Jammin’ in New York” from 1992? In that one, Carlin not only eviscerates the Gulf War and golf courses, but slashes through the topics of cable news, saving the planet, and even bulimia. Incidentally, Carlin thought “Jammin” was the best stand-up set he ever did. Check it out and you’ll see why.

from The Establishing Shot https://ift.tt/IotMPDr
via IFTTT