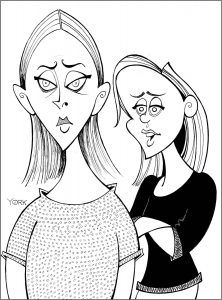 Original caricature by Jeff York of Sarah Gadon and Alison Pill in ALL MY PUNY SORROWS. (copyright 2022)

The topic of suicide is a hard sell for any film, but while the new release ALL MY PUNY SORROWS is ostensibly about such an unsavory subject, what’s really being examined in the drama is the grieving process. Just how those mourn such a loss gives this film its heart and heartache. Director/writer Michael McGowan has adapted Miriam Toews’ complex novel with its sadness and tensions intact, as well as a surprising amount of levity. The film also showcases two of the best actresses in the business – Alison Pill and Sarah Gadon. Their work here is wholly affecting, as is the film, one that will remind you a lot of ORDINARY PEOPLE. Like that Oscar-winner, this film tackles the fallout from a family tragedy and doesn’t shy away from showing good people acting badly because of it.

As the film begins, patriarch Jake Von Riesen (Donal Logue) quietly removes his glasses and places them on the pavement before stepping in front of a moving train. It’s as if he doesn’t want to see what he’s doing. McGowan doesn’t show us either, smartly, instead choosing to concentrate on all the mess in the lives of those left behind. The three female family members that Jake has abandoned must now pick up the pieces and it is a mighty struggle, a task that leads to varying levels of success amongst the trio.

Daughter Yoli (Pill) has fallen into a malaise. Her grieving has only heightened her insecurities, leading her to question her worth as a writer, wife, and mother. Indeed, Yoli sees only her failures: a blocked novelist,  a soon-to-be-divorced wife, and a perennially frustrated mom. Still, despite her failures, Yoli remains admirable. She has a funny sense of self-deprecation and keeps trying to make lemonade out of the lemons. Her sister Elf (Gadon), on the other hand, isn’t nearly as plucky. The successful concert pianist may carry herself with a glamorous aura and have a doting, handsome husband in Nic (Aly Mawji), but she can’t shake the past, from a childhood stifled by small-town rigidity to her father’s horrendous exit.

Elf is so lost in her grief, bristling as Yoli blathers on over the phone and unable to enjoy a standing ovation during a concert, that she attempts suicide herself. Now, Yoli, Nic, and matriarch Lottie (a wonderfully subtle Mare Winningham) are stuck trying to make sense of it all and prevent Elf from trying to kill herself again. (Upwards of 11% of those who attempt suicide, try a second time.)

As Elf lies in the hospital bed slowly recovering, Yoli becomes hellbent on being there for her sister, as well as desirous to turn over a new leaf. Thus, Yoli sets out to finalize her divorce and mend her strained relationship with her prickly daughter Nora (Amybeth McNulty). Yoli tries to find better men in her life too, eschewing the doofuses she was settling for as she re-entered the dating pool like one conquest who oh-so-neatly folded all of his clothes into a crisp stack before joining her in the sack. Pill makes all of Yoli’s efforts worth rooting for, particularly when she rolls her eyes at her terrible lover. If you saw her work on THE NEWSROOM a few years back, you know that Pill has an unerring flair for comedy. (Come to think of it, she’s quite amusing on STAR TREK: PICARD these days too.)

Yoli works on connecting more with her mother as well, searching for insights from their past family life. Winningham is wondrous in these scenes, clueing us into her character by what she doesn’t say as much as what she does. Yoli tries the same with Elf, but their sisterly combativeness keeps them taking two steps back for every single one forward. The siblings bicker, needle each other, and pour salt into each other’s wounds, knowing just where the tender spots are. They also laugh, cry and come to understand each other better too. Pill and Gadon play all such shadings superbly, and McGowan is wise to let them rip.

He’s truncated a lot of Toews’ knotty plotting and vivid B stories. (The Aunt Tina subplot is abbreviated significantly.) McGowan makes the sister’s story the focus and he shrewdly weaves in numerous flashbacks of Yoli and Elf as younger girls to further illuminate how they’ve become the adults they are. Marin Almasi and Gabrielle Jennings play the teenage Yoli and Elf, respectively, and though they barely resemble their counterparts, they give sharp performances that compliment Pill and Gadon.

McGowan has his cinematographer Daniel Grant shoot everything in pallid tones, suggesting that death has drained the life out of so much of the Von Riesen’s existence. Such color correction may play a bit too on-the-nose, but it keeps the sense of dread ever-present, foreshadowing the further doom to come. And the director finds some very clever uses of metaphor throughout his storytelling too including cluttered shelves, grand pianos, and family photographs, all suggesting more than their mere face value.

ALL MY PUNY SORROWS, now available on-demand and digitally, is the kind of film that seldom gets produced by anyone these days. It’s a small, intimate, and intricate chamber piece about a challenging subject. Kudos to Momentum Pictures for taking such a risk, and letting McGowan create his vision. In the end, the film not only entertains but illuminates the human condition. It’s an honest and moving work, full of artistry and bravery.

from The Establishing Shot https://ift.tt/ApVGn8T
via IFTTT