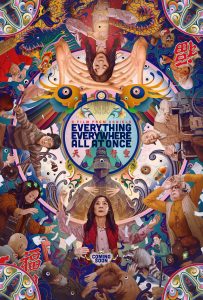 There’s a lot of talent and imagination on display in EVERYTHING EVERYWHERE ALL AT ONCE. The story stars the extraordinary Michelle Yeoh in a complex part that she absolutely aces and the film’s production values are first-rate from the first frame to the last. It has verve and energy to spare and showcases Chinese-American actors in, of all things, a unique fantasy/action vehicle. So, why can’t I quite recommend it?

Quite simple. The story is a muddled, overlong, and overwrought mess.

So much so, that writer/directors Dan Kwan and Daniel Sheinart let their film fly right off the rails in the last act, losing all the good that it had going for it. It runs a half-hour too long, mucks up its narrative coherence, and beats the same schtick over and over again to death. Kwan and Sheinart are eminently talented filmmakers but they need to understand that even in the world of the fantastical, less is usually more.

The film starts promisingly, if too frenetically from the get-go. Evelyn Wang (Michelle Yeoh) and her family have schlepped to the IRS to go over the details of their laundromat business with a suspicious agent named Deirdre Beaubeirda (Jamie Lee Curtis having a hoot playing a surly frump). The Wang business receipts are stacked neatly on Deirdre’s desk but she smells fraudulence. The Wangs have tried to claim several items as business expenses, like a karaoke machine, but Deirdre isn’t buying it.

In addition to rubbing the US government the wrong way, Evelyn is at odds with her family as well. Her henpecked husband Waymond (Ke Huy Quan) is tired of her bossiness and wants a divorce. Her daughter Joy (Stephanie Hsu) is a lesbian, much to Evelyn’s Old World disapproval. And Evelyn’s father Gong Gong (veteran character actor James Hong) is a senile oddball who needs more care and attention than the Wang clan can give him.

That’s a lot of story threads right off the bat, and the screenplay cleverly shows how torn in all directions Evelyn feels by having her fracture into different versions of herself. That’s where the ‘everywhere all at once’ title comes in and soon enough, Evelyn is battling various enemies on separate planes in the multiverse of her life.

In one version, Evelyn imagines herself as a sexy movie star (shot when Yeoh was at Cannes a few years ago) bantering wittily with a version of her hubby suggesting a sly spy. (Who knew that the kid who played Short Round in INDIANA JONES AND THE TEMPLE OF DOOM could grow up to be such an accomplished adult playing both a nerd and a Bond-wannabe?) In another take on her life, Evelyn imagines herself as a kung fu action star, vamping the same moves that Yeoh performed so exquisitely in CROUCHING TIGER, HIDDEN DRAGON 22 years ago.

Yeoh plays other versions of Evelyn too, everything from a criminal on the run to the lesbian lover of Deirdre’s. Not all of her guises make total sense here, becoming more flights of fancy of the filmmakers than the character. Still, most of it is involving, clever, and at times, even moving as Evelyn struggles to figure out who she’s supposed to be in this trying world.

The two directors make more mistakes. They fail to properly develop Evelyn’s struggles with her daughter or add any dimension to Joy’s relationship with her lover Becky (Tallie Medel). They throw a lot of cheap sight gags against the wall hoping they’ll stick, and a number of cringy slurs are bandied about too. By the time the film introduces blood-spurting gunplay, a pretentious heaven sequence, and a god-like bagel, the film becomes a pretentious mess, conjuring unflattering comparisons to train wrecks like CLOUD ATLAS and A WRINKLE IN TIME.

Is it worth seeing EVERYTHING EVERYWHERE ALL AT ONCE for the first two-thirds and a never-better Michelle Yeoh? Perhaps, but it’s hard to watch artists like Kwan and Sheinart flail because they don’t know when to put down the brush. Overworking and overmixing colors on the canvas yields mud, and that’s the aptest metaphor for this film which is filled to the gills with them.

from The Establishing Shot https://ift.tt/g5fzYEW
via IFTTT