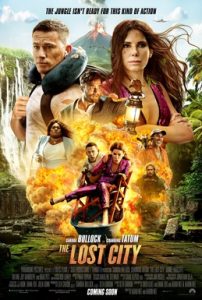 Does any actress play “uptight” on screen better than Sandra Bullock? Trying to walk in beauty pageant heels, tripping all over Ryan Reynolds while starkers, driving an LA bus hooked up to a bomb – Bullock has turned fretting into high art. In her new adventure–comedy THE LOST CITY, the Oscar-winning actress spends half the film stuck in the jungle in a sequined party dress, squirming and fumbling about with hilarious results. The rest of the film doesn’t wear as well as Bullock working that garment, but the movie still manages to be escapist fun, a summer movie gracing us in late March.

Bullock plays Loretta Sage, a successful author of romance-adventure novels, who’s become bored with her prose and longs for genuine connection. Her husband, with whom she shared a taste for travel, died many years ago, and since his passing, Loretta has become more and more of a recluse. She can barely finish her latest book and she dreads having to go out and promote it, much to the chagrin of her gung-ho publicist Beth (a boisterous Da’Vine Joy Randolph).

Loretta is especially irked by the inclusion on the junkets of Alan Caprison (Channing Tatum), the model who supplies the likeness for Dash, her literary hero, on the book covers. Tatum’s Alan is a self-centered actor, with long tresses a la Fabio, and a sense of self-importance that angers the author who must share the stage with thisegotist. He doesn’t know his finely sculpted butt from a hole in the ground and constantly steps on Loretta’s efforts to explain the historical places that inspire her stories. One fan who does appreciate her findings is Abigail Fairfax (a hilariously priggish Daniel Radcliffe), the entitled offspring of a wealthy Murdoch-esque family. He wants her to help him find an ancient crown that will bring him fame and glory.

When Loretta turns Fairfax down, he has his thugs kidnap her right from the junket, in that sequined dress, to force her help. Unfortunately, his thugs end up grabbing Alan too, and soon the odd couple ends up deep in the jungle searching for treasure at gunpoint. Clearly directors Adam and Aaron Nee, who cowrote the script with Owen Uziel and Dana Fox, love films like RAIDERS OF THE LOST ARK to ROMANCING THE STONE to THE MUMMY and have served up an amusing homage to such adventure films. And soon enough, the film is incorporating all kinds of familiar schtick including breathless escapes, winding chases through difficult terrain, and secret tombs.

Such tropes still play well, and Bullock and Tatum add a lot to it all with their quippy banter. They both have a breezy way with the rapid-fire dialogue, and they’re assured physical comedians too. Their best scene finds Loretta being forced to remove leeches from his almost naked body. She is repulsed by the bloodsuckers but impressed with Alan’s chiseled body. And when Alan asks her to check his junk for leeches, her reaction is worth the price of admission.

When the adventure part of the film takes over in the third act, a lot of the banter dissipates, and you wish Loretta and Alan were still trading barbs when they’re exchanging goo-goo eyes. Still, their romantic chemistry is easy-peasy, and the finale still leans more towards the comedic even though a volcano is raining fire all around them.

The film also benefits from a very deft, extended celebrity cameo that’s a hoot, and a rapid pace that keeps it all rollicking along. It also reminds the audience what a gifted comedian Bullock has always been. She plays serious very well (GRAVITY, BIRDBOX), but the star is an absolute gem playing put-upon, angsty heroines. You can see why Alan falls in love with her. She’s an absolute stitch!

from The Establishing Shot https://ift.tt/o6JZh2B
via IFTTT