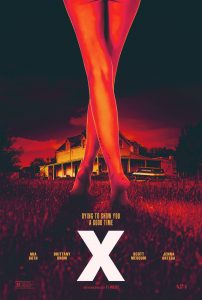 One of the strengths of Ti West’s horror films is that they treat the genre seriously. Too often, newer filmmakers inject condescension into their frighteners, as if they’re snickering at the audience for liking horror. Some even play them as near parody or at least meta experiments in commenting on every trope. But West’s horror as an earnestness to it. Even in his latest movie, entitled X, where he’s riffing on both the horror genre and the porn industry from the late 70s, there is a sincerity to it all. He’s playing it straight as he wants us to be gasping for air, not guffawing with laughter.

And let’s face it, combing slasher films and adult fare from that period could easily have yielded something wholly comedic. The production values, the acting, the ‘groovy fashions’ – they all are ripe for parody. The IMDB.com description of West’s X sounds almost like that, suggesting a more adult version of FRIDAY THE 13th – “In 1979, a group of young filmmakers set out to make an adult film in rural Texas, but when their reclusive, elderly hosts catch them in the act, the cast finds themselves fighting for their lives.” Fornicate and get killed for it, right?

Whereas the FRIDAY THE 13th films all came with a mocking attitude about the genre, chortling at the hapless teens too preoccupied with sex and debauchery to realize a killer was in their midst, West’s film cares about the young people being targeted. It’s refreshing in its earnestness and makes for a more involving horror film because of it. And even though the pornographers taking center stage have their comic foibles, they’re written as real characters, not caricatures.

The elderly couple, whose property they’re going to exploit, aren’t as upbeat. Old-timer Howard (Stephen Ure) holds a rifle on Wayne when he greets him at the door, suspecting he’s a trespasser. Wayne charms his way around the accusation and even hands Howard a wad of cash to let him bring more guests to stay in his guest house on the premises for a few nights. Soon afterward, Wayne and his crew hunker down and start shooting naughty sex scenes for his film he’s calling “The Farmer’s Daughters.”

Maxine’s first experience with Howard’s wife Pearl (played by Goth, doing double duty here) is equally disturbing. Pearl is hungry for intimacy as Howard’s an ornery coot with a heart condition. Being love-starved has driven the still sensual, ex-dancer Pearl crazy over the decades, and she immediately comes on to Maxine. It’s an unsettling bit and Maxine’s rejection of Pearl’s advances triggers her to go over the edge. Soon, Pearl will be releasing all sorts of couped-up passions, including homicidal acts that West implies are almost orgasmic the troubled senior.

As Pearl’s violence starts to escalate, West keeps the gore in check. He stresses the story and characters instead of the bloodletting. West does commit a few genre cliches by ensuring his victims act too clueless when they should be far savvier after their ranks start to thin. At those times, he brushes too close to all the slasher films that have gone before with too many being too in the dark to notice a maniac is coming for them. Still, even as the characters get offed for their obliviousness in X, they at least remain likable up until their bitter ends.

The cast is very good throughout, especially Brittany Snow who gives a confident and often-nude performance as a savvy blonde starlet. Henderson is terrific too, especially when he gets to act fatherly, even if his Wayne does so, clad only in tighty-whitey’s. Goth is quite amusing as the over-confident, coke-snorting Maxine, and absolutely chilling as Pearl. She’s under heavy prosthetics so you might not recognize her, but it adds an extra dimension to the theme of two sensual women separated by generations but looking for a version of adoration through sex.

West uses light and shadow to great effect from start to finish, hiding a lot of the gruesomeness, as well as sexualized body parts. He even uses dark rooms to prevent us from seeing the elderly couple too clearly. That makes them all the scarier and probably hides some of the obvious old age makeup too. (Both actors playing the elderly couple are considerably younger.) All in all, the writer/director has made an exceedingly effective film that delivers the frights while serving up strong characters to root for, all with a sense of fun that never infringes on the seriousness of the onslaught.

In the end, your only guffawing may be over how well West pulled it all off, considering both of the outrageous genres he’s combined here so effectively.

from The Establishing Shot https://ift.tt/DOFzx5i
via IFTTT