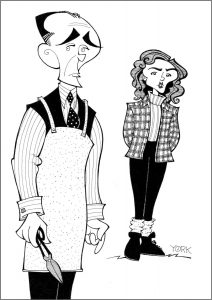 Original caricature by Jeff York of Mark Rylance and Zoey Deutch in THE OUTFIT. (copyright 2022)

It’s rare when a film settles into a single setting, focusing on the characters within it, and eschews the razzle-dazzle of special effects or a self-conscious camera. One can count such movies on one hand in any given year and here in March we already have a standout of the sort in THE OUTFIT. It’s the new film from Oscar-winner Graham Moore, the writer of THE IMITATION GAME, and his directorial debut is a contained thriller that takes place inside the tight, confines of a 1950’s haberdashery in Chicago. There, a handful of characters take part in a tense game of cat and mouse, trying to discover just who is “the mole” giving up mob secrets.

The owner of the shop is a “cutter” named Leonard (Mark Rylance), a soft-spoken but affable chap who not only makes suits for various gangster clientele, but he also allows them to use his establishment as a money dropbox for “The Outfit.” That’s a big group of mobsters united throughout the USA building up a criminal empire from coast to coast. Leonard’s assistant, the idealistic Mable (Zoe Deutch), questions why he’s making such deals with the devil, to which he calmly tells her, “If we only allowed angels to be customers, soon we’d have no customers at all.”

It’s a clever line and Moore and co-screenwriter Johnathan McClain write plenty of them for Rylance, Deutch, and the rest of his cast to speak throughout the film. In fact, one of the movie’s charms is to hear characters talk so much, all the while revealing themselves, or in some cases, revealing truer motivations by lying through their teeth. And there are a lot of lies that take place throughout this story as various gangsters come-a-callin’, most of them exceedingly interested in a tape recording that is supposedly being kept there that identifies “the rat” in the mob.

Moore trots out thugs that in other films would be cliches, but here, the superb writer manages to find ways to make them feel wholly fresh even if they’re ‘types.’ Richie (Dylan O’Brien) is the privileged son of mob boss Roy (Simon Russell Beale), but he’s considerably sweeter and more fearful than you’d expect such an offspring to be. Roy’s fixer Francis (Johnny Flynn) can be a vicious brute, but he’s also one of the guys in the room thinking two or three moves ahead of the others. And top dog Roy, while firmly relishing his familial control, manages to be much more self-reflective and even accommodating during his disagreements with the other members of his gang after Richie goes “missing.”

Moore keeps the characters guessing who’s who and he keeps us in the audience on our toes too. He uses spacial relationships to suggest alliances and/or betrayals long before they occur. (There’s quite a bit of foreshadowing throughout, always the trope of an expert scribe.) And even when the mole is finally revealed, there are still a number of significant rug pulls afterward to be savored before the credits roll.

Each of Moore’s cast gets a chance to shine, especially Rylance whose whispery, slow cadence can sound naïve one moment and sly the next. Yet, even as much fun as it is to hear Leonard expound on his craft or who he thinks the mole is, watching Rylance is even more of a treat. He does so much with his reticent body language, the furrowing of his bushy brows, and the pursing of his lips as he calculates his next move. You can see him thinking and it’s a hoot.

Moore plays with some very Hitchcockian visuals as well. There’s a small pool of blood dripping in an unwanted place. Leonard’s sheers sit on the table, ready at a moment’s notice to become a weapon. And the curtains to Leonard’s cutting room hide plenty that certain folks want to remain hidden, like a winter coat.

Such a contained, single-setting story could’ve come off like a filmed stage play, but Moore ensures that the big screen is used to large effect, showing the slightest nuance in a character’s eyes, or a clue just out of focus behind a talking head. The filmmaker has made marvelous cinema here, and the stunning special effects aren’t the CGI kind, but rather a roomful of superb actors relishing the banter and tension in a crackling thriller. It’s a perfect fit.

from The Establishing Shot https://ift.tt/vPzUpTk
via IFTTT