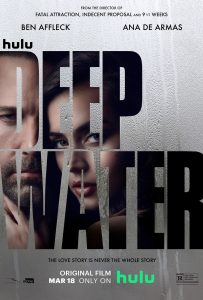 There’s a reason the buzz has been so controversial around the new movie DEEP WATER starring Ben Affleck and Ana De Armas. The thriller, which debuts on Hulu this Friday, has been plagued by delayed release dates due to the pandemic, as well as the gossip of an affair its two stars reportedly had while filming before the coupling was undone by Affleck’s reconciliation with Jennifer Lopez. But the true culprit driving the rumor mill about why the movie was so problematic is much, much simpler.

The film is bad.

Director Adrian Lyne waited 20 years to make another film after his hit UNFAITHFUL in 2002, but to return with this mess is not the way to make a comeback. At almost every turn, his helming bungles things badly, starting with the decision to tell the tale as a modern one. Patricia Highsmith’s original 1957 bestseller took place in the Eisenhower Era and that more conservative time was crucial to giving the events in her story credibility and sympathy.

Not that Zach Helm and Sam Levinson haven’t been quite loyal to Highsmith in their adaptation, but what played as believable actions in the 1950s plays as ridiculous ones today. The story concerns Vic and Melinda Van Allen (Affleck and De Armas), a well-to-do couple in a loveless marriage. A precarious understanding holds them together: to avoid divorce, Melinda is allowed to take any number of lovers she wants as long as she doesn’t desert her family. That sort of devil’s bargain may have seemed rational for a couple in 1957 when divorce was still scandalous and the rate of broken marriages was barely 2 percent out of every thousand. But 70 years later, half the marriages in America end in divorce within four years, so that agreement seems asinine.  Highsmith’s story should have remained a period piece for the film’s very conceit to make any sense.

Making matters worse here is that Melinda is so brazen about her affairs; they’re completely out in the open to everyone in town. Even the many social gatherings that the Van Allen’s participate in turn into more opportunities for all the guests to run their mouths about the troubled marriage. And why would Vic, a pillar of the community, one of its richest residents, and the father of an impressionable young daughter (Grace Jenkins), allow himself to be the butt of such snickers? Vic’s agreement with his wife in the 1957 novel was to avoid the public shame of being divorced in a time that cherished family values. Here, his standing as a cuckold is known by all, and that fact makes him seem like one big chump.

More grist is added to the mill when one of Melinda’s past lovers disappears. Rumors abound that Vic killed him, and the rich man revels in the gossip that he’s a killer. In Highsmith’s novel, the whispers about Vic occurred as well, but they remained whispers. Here, Vic is even accused of being a murderer brazenly to his face at parties. And if it’s such a popular topic in town, then why isn’t Vic under investigation? And why are all of the Van Allen’s inner circle continually laughing off all such horrible accusations? It makes precious little sense that such a crime isn’t taken more seriously by everyone in the community.

Rather than iron out such narrative problems, Lyne seems preoccupied with satirizing the rich as if they’re all oblivious Daisy and Tom Buchanan types. The veteran director doesn’t help matters by botching the tone and tension at almost every turn too. De Armas’ Melinda is loud and obnoxious, at times almost laughable in how much of a femme fatale Lyne encourages her to be. Affleck’s Vic, on the other hand, is directed to play just two notes: morose or smug. The miscalculating director even encourages the great Tracy Letts to overact in every scene as a self-absorbed writer investigating the Van Allen’s.

Toward the end, the film flies off the rails with a car chase that’s so over-the-top it belongs in a Will Ferrell comedy. But by then, the entire enterprise has collapsed into near farce, full of dumb twists that deviate from Highsmith’s book, and broad-acting that feels wholly amateurish. No wonder this film had tongues wagging for months about it. It may only be the middle of March, but 2022 already has a strong contender for the stinker of the year.

from The Establishing Shot https://ift.tt/smWcG2L
via IFTTT