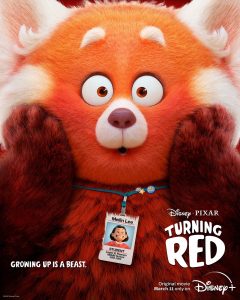 Pixar continues to push the animated cinema envelope with its new feature about a middle-schooler’s maturation and the start of her menstrual cycle. Even the title of this audacious new film is an eyebrow-raiser – TURNING RED. The daring continues throughout the narrative too as the animators have come up with a Jekyll/Hyde style metaphor for her hormones raging as any ginormous emotions turn the girl into a 10 ft. furry red beast – specifically, a panda. As you’d expect from Pixar, the film has all the studio’s typical artistry and cleverness, yet this one comes with big twists that often qualify as outright shocks.

As the story begins, Mei Lee (voiced by a terrific newcomer Rosalind Chiang) resembles all the Miley’s and Zendaya’s who took center stage in those Disney Channel’s teen comedies a decade ago. Mei is smart, hip, happening, and confident. This Asian-Canadian girl has an entourage of colorful friends and a penchant for breathlessly narrating her on-the-go life. Her days are spent preoccupied with boys, fashion, music, as well as the occasional run-in with her conservative mother Ming (voiced by Sandra Oh). When Mei’s first period arrives, the event not only disrupts her life by jump-starting her adulthood but the heightened emotions she feels cause a spectacular change in her physique. Much to Mei’s discontent, she discovers that an ancient Chinese curse has attached itself to the women in her family, and when they feel intense, oversized emotions, they turn into giant, red pandas. (That explains one reason why her mom acts so composed.)

Such a premise could have played out as unsavory or become a one-note joke about Aunt Flo visiting, but as written by Julia Cho, Domee Shi, and Sarah Streicher, and directed by Shi, the film becomes a rollicking adventure that finds both the humor and the heartbreak in Mei’s evolution. Despite the large bear, the story isn’t beastly, but rather, loving, moving, and yes, even cuddly. (Mei’s teddy bear alter ego is wholly adorable, but I’m not banking on the typical Disney/Pixar toy sales here.)

What carries the whole shebang along so well is the universal truths present within the outrageous plotting of TURNING RED. Yes, menstruation is at the center of it all, but the movie’s teen angst angle is universal, whether it’s periods, pimples, or popularity. Fearing judgment of our bodies or looks is also not mutually exclusive to teens. The genius of TURNING RED lies in the relatability to Mei, no matter one’s sex or age.

Shi and her writers manage to make fun of societal conventions throughout as well which makes the film all the more universal.  The climax during a boy band concert is hilarious, riffing on everything from Godzilla to Nsync. Additionally, the filmmakers weave in clever commentary regarding parenting, East v. West, cliques, and more.

The film, which debuts on Disney + this Friday, March 11, has a few parts that aren’t wholly successful. The mother character skirts too close to Tiger Mom cliches, and the whole red motif reaches a point of, ahem, saturation at times. I also think that it might have behooved Pixar to give this film a different look than so many of the other entries on their IMDB page. The gleaming, rubber-faced characters have too much of the expected Pixar look at times and belie some of the mature themes.

TURNING RED should be congratulated though for telling a female-front story, made by female filmmakers. That shouldn’t be so novel, but in patriarchal Hollywood, it still is. This entry should also tee up the studio to tackle wholly adult-themed films from time to time and give them a different look design-wise as well. Thrillers, horror, even adult love stories – who’s to say that Pixar couldn’t tackle such fare with the same gusto as all-family fare? Broadening horizons might make other studios turn red, all the while adding more green to Pixar’s fortunes.

from The Establishing Shot https://ift.tt/xQvfOzZ
via IFTTT