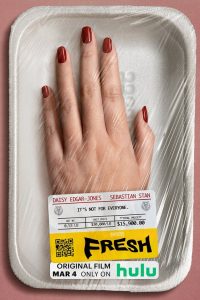 There is a line in horror, where the storytelling can go from tense to traumatic and engrossing to grotesque, and filmmakers cross such a line at their own peril. Once done, it can be very difficult to get an audience back as it’s one thing to compel an audience to cover their eyes and another thing to force them to look away. Such is the case with the new horror film FRESH that’s premiering on Hulu today, written by Lauryn Kahn and directed by Mimi Cave. It starts out as a deft examination of the angst of dating in the age of swiping left and right, and all too soon turns into a film that loses our sympathies as it turns nauseating.

Indeed, the point of FRESH is to “sicken” us at how men treat women, but it makes its case with a very heavy hand.  Noa (Daisy Edgar-Jones) is a young woman growing more and more frustrated with the creeps she encounters in the dating world. They may appear handsome and charming, but soon enough, most of the guys reveal themselves to be shallow, snide, and creepy. Thus, Noa retreats to the sympathetic ear of her bestie Millie (Jonica “JoJo T. Gibbs) and they kvetch about how difficult it is to find a guy with the right stuff.

Then, Noa happens upon Steve (Sebastian Stan) in a grocery store and her fortunes appear to change. He’s handsome, witty, and a well-to-do plastic surgeon. He asks her out and they have a great time. Things start moving fast, and even though Millie cautions Noa to slow down, the lonely ingenue rushes headlong into a weekend away with her new beau, trekking with him up to an opulent getaway in the mountains.

From there, Noa’s fortunes quickly change. Steve drugs her drink and suddenly he’s not a suitor, he’s her kidnapper. (NOTE: HEAVY SPOILERS AHEAD – NECESSARY TO EVALUATE THE FILM.) When Noa awakens, she’s chained to a wall in a room and it becomes her prison cell for the remainder of the story. Steve calmly tells her that she is to be harvested for body parts that will go to high-paying male customers who want to eat the flesh of women.

Now, at this juncture, the film could have gone a couple of ways. It could become a sly, dark comedy in the mode of Emerald Fennell’s feminist revenge movie PROMISING YOUNG WOMAN. Or it could have examined cannibalism as a metaphorical rite of passage for a teenager into adulthood like in Julia Ducournau’s droll French film RAW. Instead, Cave opts for two choices that cheapen the material.

First, she directs Noa’s victimization to be far too horrifying. The young woman is utterly terrorized, humiliated, and yes, operated on, and it’s too traumatizing to watch. Perhaps being that vicious was what Cave wanted to reveal in Steve, but it ends up showcasing her prerogative too. Witnessing Noa’s hysteria as she’s smacked around, wrestled to the ground, and much, much more is very hard to sit through. Edgar-Jones is such a terrific actress too that she makes Noa’s torment all the more palpable. The film starts to slowly shift from social satire to something more exploitative.

Second, too much of the visuals become grosser and grosser. Not only does Cave showcase Steve and his various clients eating the slices of body parts with relish, but the director amps up the sound design to make each smack and slurp all the more disgusting. It’s, ahem, salting the wound, if you will. Cave and Kahn also trot out too many egregious cliches in the final act as well, hitting those ridiculous tropes of victims not ensuring that the villain is down for the count. Some of it plays like FRIDAY THE 13Th with Jason Voorhees coming back again and again, and those are not the comparisons this film should be inviting.

I’ve sat through plenty of horror films that push the edge of unseemly visuals (THE THING) and even female abuse (I SPIT ON YOUR GRAVE), but FRESH goes too far in embracing both styles. Cave’s film would have been just as effective with a subtler approach, less shown, more implied, and played cooler and more craftily throughout. Within this film are clever indictments of dating, misogyny, and even how women don’t always have the backs of other women, but it’s hard to see all that when one’s eyes are looking away in abject disgust. All in all, it made this exercise in terror simply too difficult to swallow.

from The Establishing Shot https://ift.tt/t4pExdS
via IFTTT