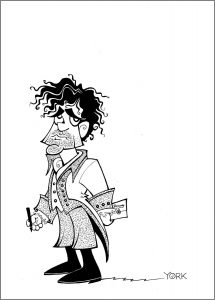 Movie musicals can make us believe that our forefathers harmonized (1776), New York street gangs Arabesqued through the city (WEST SIDE STORY), and giant plants boogied to Motown (LITTLE SHOP OF HORRORS). So, why shouldn’t a movie musical about CYRANO persuade just as easily? Perhaps because it seems a contradiction in terms for a tongue-tied soldier courting a lady to be able to break out into song? That’s just one of the strange contradictions in filmmaker Joe Wright’s take on Erica Schmidt’s 2018 stage musical, itself adapted from Edmund Rostand’s 1897 chestnut of a play Cyrano de Bergerac. Fortunately, Wright cast the estimable Peter Dinklage in the title role and his charms alone are reason enough to see this frothy if flawed interpretation.

Anyone who studied drama in high school knows the story of Cyrano and his unrequited love for the beautiful Roxanne in mid-1600s France. He’s hindered by a gigantic nose that makes him a target of ridicule amongst society’s elites. Further damaging his confidence is an unlikely rival for her affections – his friend and fellow soldier Christian. Christian’s very handsome but inarticulate, so he asks Cyrano to help him woo Roxanne. Soon, Cyrano is writing his words of love for her in letters and letting Christian claim them as his own.

Everyone from Jose Ferrer to Gerard Depardieu to Steve Martin has put on the putty nose to play the forlorn protagonist over the years, and this version finds new ways to freshen things demonstrably. For starters, Cyrano’s ostracization here is due to his dwarfism, not a giant proboscis. The irony is writ even larger this go-round as Dinklage’s Cyrano may tower over everyone in intellect and bravery, but he must forever look up at his inferiors.

Even more unique is that this adaptation is set to music. Schmidt’s songs are quite lovely, and Wright knows how to direct singing actors and film them dancing as well to work within his frame. What doesn’t work so well, however, is having a tongue-tied Christian (Kelvin Harrison, Jr.) sing intricately worded rhyme schemes throughout the film. If he’s supposed to be at a loss for words, why is he warbling so romantically like a Broadway leading man? Perhaps if Wright had cut Christian’s singing and let only Cyrano and Roxanne (Haley Bennett) croon, the music would have underlined their singular connection. But having Christian sing poetry works against the story’s very premise.

Nonetheless, Wright runs with it and adapts Schmidt’s musical numbers here, from the guilt Cyrano and Christian feel in their deception to the efforts of De Guiche (Ben Mendelsohn) to establish himself as a worthy suitor of Roxanne. Roxanne sings about her plight as a woman in elite society back then too, and it adds a knowing, modern touch to this period piece. Wright guilds the lily considerably though by having those elites portrayed as foppishly broad caricatures with faces and wigs powdered like an Entenmann’s donut.

If Wright had just done his adaptation without the music, he might’ve made a wholly successful comedy of manners. But in addition to the pitfalls of deciding to keep a singing Christian in the mix, the director also adds diversity to the casting that plays as a bit out of place with most of the cast being so lily-white and playing their parts so “old school.” Still, Wright gets sharp performances from all three of his leads, particularly a terrific Dinklage, who brings a roguish charm to the whole shebang, even when Cyrano is awash in self-pity. The production values are all first-rate too with the lush cinematography and detailed costumes impressing the most.

CYRANO opens this weekend in theaters, and why a romantic film like this wasn’t released two weekends earlier over Valentine’s weekend, seems like a silly mistake. One wonders too if production company MGM may have also missed on getting enough screeners out in time to secure an Oscar nomination for Dinklage as Best Actor. Still, the film did get nominated for its marvelous costumes created by Massimo Cantini Parrini and Jacqueline Durran.

All in all, even with such various distractions and missteps, this CYRANO is a charmer, particularly Dinklage. His take on the role measures just as cleverly as any of those other Cyrano’s who preceded him. He’s all heart, and he might just quietly break yours too.

from The Establishing Shot https://ift.tt/dLVc9XP
via IFTTT