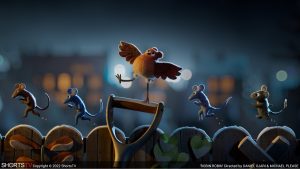 A scene from the animated short ROBIN ROBIN.

In many respects, movies reflect the period they’re made in. The era of Vietnam and Watergate yielded many paranoid films questioning the intentions of those in power. The Reagan era saw macho, jingoism infiltrate Hollywood with the likes of Stallone and Schwarzenegger. Now, in this era of COVID-19, white nationalism, and political polarization, the Oscar-nominated shorts are nothing if not reflective of such utterly dark times. In fact, these truncated films may very well be the bleakest and darkest shorts nominees ever. Even the cartoons might send you reaching for a Xanax. 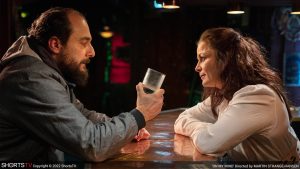 A scene from the live-action short ON MY MIND.

Of the live-action shorts, even the one that is the most uplifting has serious illness as the core of its narrative. Yep, it’s that kind of year. The film is entitled ON MY MIND, and it’s an 18-minute gem from Denmark and filmmaker Martin Strange-Hansen. The story concerns a morose man named Henrik (Rasmus Hammerich) who takes a bar stool in a tavern early one morning and becomes fixated on whiskey and karaoke. Louise (Camilla Bendix) is a sympathetic waitress who lets him indulge in his wish to sing his take on Elvis Presley’s classic ballad “You Were Always on My Mind.” That doesn’t sit well with stressed bar owner Preben (Ole Boisen) who’s busy trying to do his accounting, but Henrik is insistent. He wants to sing it for his wife and just why it’s their song makes for a bittersweet tale of love and regret. And, as I said, it’s the sunniest of the bunch. 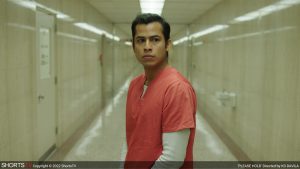 A scene from the live-action short ON HOLD.

The next short is a comedy, albeit a pitch-black one. It’s entitled ON HOLD, and it’s 19 minutes of dark comedy from American filmmaker K.D. Davila. In a not-too-distant future, twentysomething Mateo (Erick Lopez) is on his way to work when he’s stopped by an automated police drone. He’s arrested for a crime that is not named right on the spot. Mateo is flabbergasted, pleading his innocence, but he complies after the drone threatens to shoot him. In short order, he’s thrown into an equally automated jail and given plea options delivered via video prompts like you’d find if you were banking online. As the justice system starts to wholly work against him, Mateo scrambles to find a way to get his day in court. Davila’s film tackles racism, the American justice system, and our growing dependence on technology replacing customer service. This short is both hilarious and rather horrifying. 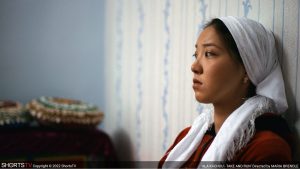 A scene from the live-action short ALA KACHUU- TAKE AND RUN.

ALA KACHUU – TAKE AND RUN is as searing a drama as any feature this year. It’s an expertly told tale from Switzerland filmmaker Maria Brendle concerning a bright 19-year-old woman named Sezim (Alina Turdumamatova) who gets kidnapped and forced into a Muslim marriage. Sezim thought she was going to college after acing her entrance exam, despite the protests of her conservative parents in Kyrgyz (a mostly Muslim country bordering China). But then one day, she’s snatched by three young men and tossed into a car. Driven high into the mountains, she’s set up in an arranged marriage, a virtual slave to her unknown husband and the backward ways of religion. The strong-willed Sezim keeps trying to fight back, all the while wondering if she can escape her living hell. It’s a wholly gripping piece, one that had me on the edge of my seat the entire time. 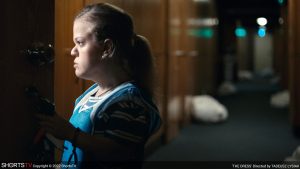 A scene from the live-action short THE DRESS.

My personal favorite of the live-action shorts, and one that could yield a feature-length film, is THE DRESS. It’s Poland’s entry and filmmaker Tadeusz Lysiak has made an exceedingly, touching character study. Julia (Anna Dzieduszycka) is a hardened young woman wasting her days as a motel maid and her nights at the bar drinking and playing slots. Her dwarfism has kept her afraid of regular people who stare and make snide comments about her condition. Still, this sullen young woman aches for love and intimacy, and when a handsome trucker (Syzmon Piotr Warzsawski) shows interest, she entertains hope to see her dreams fulfilled. Encouraged by her motherly co-worker (Dorota Pomykala), Julia gets dressed up for her date. The two women give marvelous performances, equal to many mainstream nominees this year. And if this short ends too abruptly at just 30 minutes, it remains a fascinating and moving examination of identity and worth. I adored it. 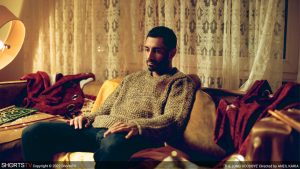 A scene from THE LONG GOODBYE.

Finally, there is THE LONG GOODBYE. The shortest of the shorts is this year’s UK submission from filmmaker Aneil Karia. It’s getting a lot of attention because it was written by and stars last year’s Best Actor nominee Riz Ahmed (THE SOUND OF METAL). The story depicts an immigrant family in London preparing for a wedding when their lives are turned upside down by an invasion from military forces hellbent on ethnic cleansing. The film means well, but it has an uneven tone, jolting from voyeuristic reality to extreme violence to pleading poetry all in a matter of minutes. It doesn’t quite work, but its message of burgeoning white nationalism threatening the world comes through loud and clear nonetheless. 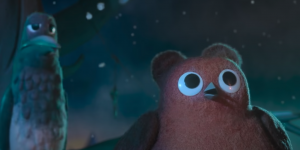 A scene from the animated short ROBIN ROBIN.

This category has gotten progressively darker over the years, and 2022’s nominees may be the most doleful since the category began. The brightest of them is ROBIN ROBIN, from the legendary Aardman animation studio and directed by Dan Ojare and Mikey Please. This 31-minute short showcases a family of mice who take in a stray robin. She desperately wants to be a mouse and even fashions her feathers into mouse ears. (A sly dig on animators bowing to the Disney powerhouse? Hmm…) She’s a clutz, ruining the home invasions of the comic critters, hoping to score crumbs for the winter. And soon enough, her shenanigans hurl her headlong into the tutelage of a wise pigeon (superbly voiced by the inimitable Richard E. Grant). It’s all a delight, full of witty lines, clever songs, funny pratfalls, and heartwarming moments. My only complaint is that the big bad in the piece is a nasty cat. It’s too easy to cast felines as villains, and it’s the only laziness evident in this crowd-pleasing charmer. 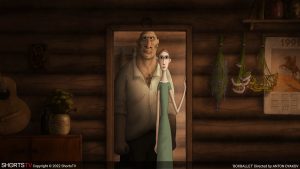 A scene from the animated short BOXBALLET.

My second favorite might have the hardest time collecting Oscar votes due to it hailing from Russia. That’s too bad because the artistry and storytelling on display in BOXBALLET are extraordinary. It’s a 15-minute gem directed by Anton Dyakov showcasing an odd-couple relationship between a past-his-prime boxer and a naïve ballerina. His nose is permanently crooked and his shoulders stooped, but he keeps trying to box, no matter how hard he’s pummeled in the ring. She, on the other hand, has an idyllic life, that is until her company’s ballet director starts letting his hands wander all over her body. (It’s a nice touch that the animators gave him predator nails that resemble claws.) This unlikely love story touches the heart and even manages to indict the overreach of the state, a timely critique of Putin’s Russia, for certain. 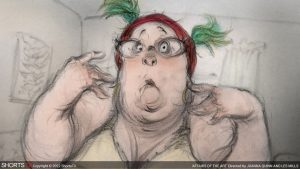 A scene from the animated short AFFAIRS OF THE ART.

The last three shorts are so adult, they could give the live-action shorts a run for their money as R-rated fare. AFFAIRS OF THE ART, a 16-minute UK/Canada production directed by Joanna Quinn, showcases Beryl, a 59-year-old artist who’s struggling to find her place in the world. She’s surrounded by all kinds of craziness, from her husband to her grown son to her narcissistic sister Beverly. Flashbacks of her childhood are interwoven with more modern moments that often showcase nudity and even violence. Thankfully, those two topics are not mutually exclusive here, and both played for laughs. It’s nutty, randy, and a hand-drawn beauty that occasionally strains a bit too hard to be provocative. 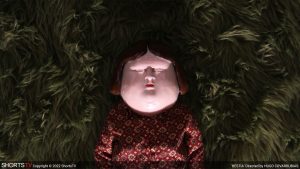 A scene from the animated short BESTIA.

BESTIA, a 16-minute entry from Chile, is another adult-themed entry that is definitely not for the kiddies. Director Hugo Covarrubias uses stop-motion animation to weave an unsettling tale about a secret police agent who uses the military dictatorship of Chile to instill fear in her community. She’s a disturbed and disturbing character, and her violent story would feel right at home in any R-rated political thriller. The caricatured look of the characters, done with porcelain doll features, seems an odd fit with such a brutal tale, but it manages to work effectively, even when the violence becomes hard to watch. 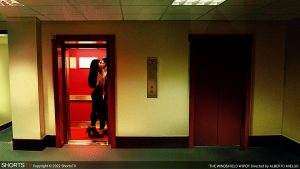 A scene from the animated short THE WINDSHIELD WIPER.

And last, but not least, there’s THE WINDSHIELD WIPER, Spain’s 15-minute entry that asks what love is and proceeds to try to answer that query with a montage of bits and pieces from a man’s life. Directed by Alberto Mieglo, the production designer of 2018’s Oscar-winning SPIDER-MAN: INTO THE SPIDER-VERSE, a similar visual palette of mixed media is incorporated here and it’s perfect for this memory play. Sometimes sexy, often depressing, but always intriguing, this short works as both entertainment and art.

The Oscar-winning shorts will become available on VOD the week before March 27’s Oscars this year. Right now, however, ShortsTV has distributed them to 350 theaters across the nation, including 100 + theatrical markets. Chicago is fortunate to be on their list, and you can catch these shorts at the Century Landmark. (The Music Box in Chicago is showing the documentary shorts that I’ve yet to see.) It’s always a pleasure to see these Academy shorts, even in a dark and moody year such as this. They almost always push the form of narrative and make for splendid cinematic experiences to rival most features. If you’re a movie fan, don’t miss out.

from The Establishing Shot https://ift.tt/aXUkR6y
via IFTTT