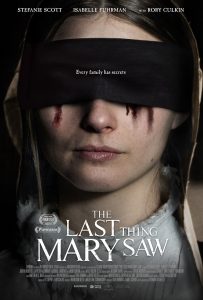 There aren’t many horror films that come with a better title than THE LAST THING MARY SAW. Few are as well-shot, and how many can boast of having an actress of Isabelle Fuhrman’s caliber amongst their cast? And God knows the puritanical practices of Christians in the 19th Century certainly lend themselves to terrifying narratives, even outside the genre. Thus, it’s no surprise that this new frightener from writer/director Edoardo Vitaletti is an effective and haunting chamber piece. It does fall short of greatness, however, by sacrificing deeper character development in favor of mood and tension. Still, it remains a film worth taking a look at in its premiere on Shudder.com starting today.

In the winter of 1843, an educated and well-off young woman named Mary (Stefanie Scott) is tied up and being interrogated by a local constable (Daniel Pierce). It’s occurring in one of those eastern seaboard communities where the most salable commodity seems to be repression. Mary is wearing a blindfold and there are streaks of blood emanating from her hidden eyes. Indeed, it seems Mary’s eyesight may be a thing of the past, so what did she see that led to such wounds? And what crime did she do that warrants her being bound to a chair to receive the third degree? It’s a compelling scene, promising disturbing and grisly horrors to be revealed.

But the narrative gives away too much far too early. With little build-up, Mary is revealed to have caused quite the scandal in the community via an all-too-obvious affair with her family’s housemaid Eleanor (Fuhrman). The script doesn’t showcase how the relationship developed and instead throws the audience headlong into the middle of it. Where are the longing looks, the sideways glances, a forbidden touch or kiss or two? This should’ve been a slow burn, but it almost feels like the film is missing a reel.

Both Scott and Fuhrman do well in underwritten parts, but they’re given little to do in the way of showing lust for each other. When they kiss, it’s almost quaint. BLUE IS THE WARMEST COLOR, this sure isn’t. There’s more hunger and passion shown towards various loaves of bread in the story, props used as bargaining chips to keep various witnesses from exposing the two women.

The casting is sublime across the board though, and the actors, including an excellent Rory Culkin and Judith Roberts, fill the parts of rigid New Englanders as well as those in similar, acclaimed films like THE WITCH and GWEN. Vitaletti also demonstrates an unerring sense of how to employ production design, lighting, editing, and music to complement his tense script. Yet, for a film that includes numerous scenes of torture, he directs his actors to underplay such pains. One character’s vocal cords are pierced by sharp sticks in a later scene yet she manages to continue her daily chores the next time we see her as if plagued by nothing more than a sore throat. Such a paltry reaction plays almost absurdly.

Still, Vitaletti goes all out indicting religious piety and sexism in the church. And the later scenes of violence that he shoots certainly hit their marks with full force. The two lead actresses hold our sympathies throughout, but their characters’ fates should devastate rather than make us merely feel pity. If the film had invested more time in their dialogue and physical bonding with each other, Vitaletti could’ve had a scarier version of PORTRAIT OF A LADY ON FIRE on his hands. But as it stands, his audience will likely be horrified, if not particularly moved. That may be fine for the genre, but the best horror should punch us in the heart as well as in our stomachs.

from The Establishing Shot https://ift.tt/3GOdM1T
via IFTTT