2021 was another odd year with the pandemic thwarting several releases and a regular return to movie theaters. Still, I saw a lot of terrific films, no matter what the venue, be it on VOD, via streaming platforms, or at the cineplex. I’ve already picked my 10 Best Films of 2021, and now it’s time for my annual selection of ten favorite images from movies this past year. And yes, there will be spoilers. 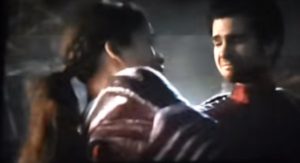 SPIDER-MAN: NO WAY HOME
For months before it opened, online chatter predicted that SPIDER-MAN: NO WAY HOME, directed by Jon Watts, would present some very familiar faces returning for this sequel. Indeed, it was great to see so many past stars of the franchise show up and help make this one such a mammoth hit. One of the extra bonuses of such returns was seeing Andrew Garfield’s Peter Parker save M.J. Zendaya from falling to her death in the climactic battle. When he realizes he saved her, Peter’s triumph is bittersweet because he couldn’t do the same for Gwen (Emma Stone) in THE AMAZING SPIDER-MAN 2. There was nary a dry eye in the theater watching Pete hold back his tears as emotions washed over him. It opened the floodgates for me too and stands as my favorite image of any film this past year. 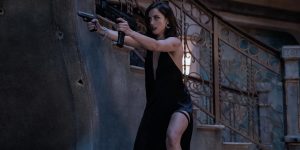 NO TIME TO DIE
In Cary Jo Fukunaga’s NO TIME TO DIE, Daniel Craig’s final Bond movie, his 007 must rendezvous with a CIA agent to infiltrate a Spectre event. Paloma, the American spook, is played by the gorgeous Ana de Armas and she is dressed to the nines in a gown cut from here to there, and there to here. When violence breaks out at the soiree, Paloma rises to the occasion, fighting and shooting with bravado and without ripping a seam. It’s thrilling, sexy, and hilarious. And that is de Armas doing most of her stunts. In that dress. My God.

DRIVE MY CAR
Sometimes a simple POV shot can devastate. In Ryusuke Hamaguchi’s DRIVE MY CAR, theater director Kafuke (Hidetoshi Nishijima) talks in the back seat to actor Takatsuki (Masaki Okada) about his wife’s infidelity. The film has painted the young thespian as a star-struck naif, as well as a hot-tempered young man, but as his superior explains more, the camera reveals another side of Takatsuki. With a simple change of the camera to the perspective of Kafuke, Takatsuki turns to face him directly. Now, the young man displays a knowing, sensual air as he admits to the affair. It’s a startling simple shot, yet it reveals so much to both the cuckold and we in the audience sharing his exact POV. THE TRAGEDY OF MACBETH
Filmmaker Joel Coen makes so many dazzling visual choices in his version of William Shakespeare’s THE TRAGEDY OF MACBETH, that it’s difficult to pick just one image. The black and white cinematography and stylized production design are resplendent throughout, but one particular shot sent shivers up my spine. Midway through the film, the three witches who counseled Macbeth return, in the persona of the singular Kathryn Hunter. This time, she’s perched on a rafter of a room’s high ceiling. The witch sits like a vulture, watching and waiting for her prey, and indeed, the witches watch as Macbeth and his wife unravel as rulers. It’s a strikingly scary shot, far eerier than any contained in straight-up horror films from the year. 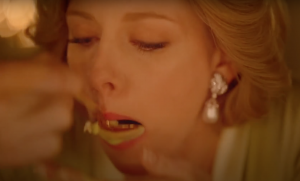 SPENCER
Pablo Lorrain’s SPENCER, a fantastical take on Princess Diana as disturbing as the filmmaker’s similar 2016 film JACKIE, burrowed deep inside the head of the depressed royal. Over one Christmas weekend, a time that should have been joyous, Lorrain shows Diana in absolute hell as she must conform to all of the rules and rituals of this uptight, aloof, and vicious family. During a dinner sequence, shot as sumptuously as any film in 2021, Diana imagines herself breaking her pearl necklace at the dinner table, unshackling herself from royal servitude, and wolfing down her soup containing the baubles. It’s a cheeky, yet devastating display, commenting on her hatred of her husband Prince Charles, her role in the public eye, and her battles with bulimia. 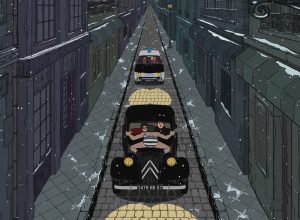 THE FRENCH DISPATCH
In the third of three stories told in Wes Anderson’s sly new comedy THE FRENCH DISPATCH, a comic kidnapping turns into a farcical chase. And what better way to illustrate that than a virtual cartoon? As the scene starts, Anderson employs animation to tell that part of the story. The filmmaker has shown a penchant for cartooning in the past with his stop-motion marvels THE FANTASTIC MR. FOX and ISLE OF DOGS, but this time, he uses old-fashioned 2-D cel animation to showcase the chase. It not only fits the cartooning style of the New Yorker, the magazine his film spoofs, but it adds even more charm to the nostalgic romp. 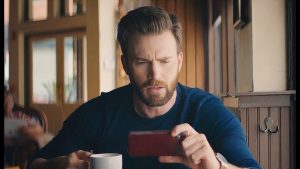 FREE GUY
Director Shawn Levy pulls out all the stops in his satire of video games in FREE GUY. The plot tells of a background character named Guy (Ryan Reynolds) stepping into the limelight to star in his own adventure. Soon enough, he’s involved in fights, car chases, and romance with the comely lead female character in the game (Jodie Comer). During the film’s big climax, with the world of gamers watching, Guy fights another video game character, one fashioned after him, but on steroids. As the bigger Guy is about to clobber the regular Guy, our hero somehow conjures Captain America’s shield to protect himself. As the Avengers theme swells, the story cuts to a shot of Chris Evans playing himself in a coffee shop. As he watches what plays out on his cell, the flabbergasted actor exclaims, “What the shit?!” In a film with a lot of huge laughs, it’s one of the biggest. 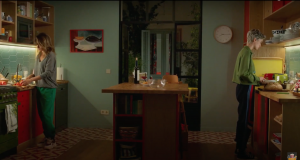 PARALLEL MOTHERS
Filmmaker Pedro Almodovar is known for his brightly-hued cinematography, and his latest employs the same colorful palate. But in PARALLEL MOTHERS, the director continually creates visuals that also illuminate the parallel lives of his two lead characters, mothers played by Penelope Cruz and Milena Smit. Never is this more obvious than when they cook a meal together, taking opposite sides of the kitchen. And yet this shot also shows, even though they’ve become good friends, that there is a gulf between them. And it will only become greater as the film goes on. They may be leading parallel lives, but the gap between them is just as obvious. 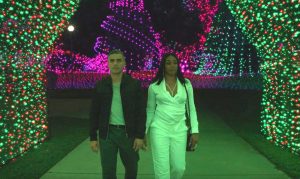 THE CARD COUNTER
Veteran filmmaker Paul Schrader imbues his work with such darkness that any time color or light enters the frame, it’s revelatory. In THE CARD COUNTER, the latest Schrader has written and directed, Oscar Isaac plays William Tell, a gambler haunted by his past as a military interrogator working at Abu Ghraib. It’s turned him into something of a monk, living a simple life, afraid to connect with people. That is until Tiffany Haddish’s upbeat La Linda, a gambling financier, enters his world. She brings in light, never more so than when she takes him through a walk through an electric park exhibit. The pop of color, and her exuberance, start to affect Tell, one that won’t change his dark mood entirely, but one that will show him a light at the end of the tunnel.

BEING THE RICARDOS
For any fan of I LOVE LUCY, writer/director Aaron Sorkin’s BEING THE RICARDOS was a shocker. It was a mostly serious story about the difficulty of making the hit sitcom in the 1950s and the toll it took on Lucille Ball (Nicole Kidman) and Desi Arnaz (Javier Bardem). Ball is presented as anything but her zany Lucy character in the film, as she agonizes over her husband’s infidelity, being accused of being a Communist, and trying to make the show funnier. Throughout most of the film, she obsesses over a dinner scene between sparring costars William Frawley (J.K. Simmons) and Vivian Vance (Nina Arianda) playing sparring spouses. She finally figures out how to make the scene work by placing the characters next to each other on a stool, elbowing each other in the tight perimeters. If you know the classic bit from the show, seeing how Ball makes it play is not only clever, but showcases how comedy isn’t pretty, but rather, a lot of serious work.

from The Establishing Shot https://ift.tt/339EqE1
via IFTTT