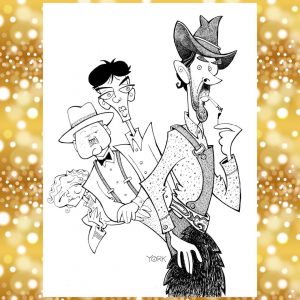 Original caricature by Jeff York of the main cast of THE POWER OF THE DOG. (copyright 2021)

The Chicago Indie Critics have announced our 2021 film award winners and THE POWER OF THE DOG did very well. They won three awards including Best Studio Film, Best Director, and Best Adapted Screenplay. (Both of those last two awards go to filmmaker Jane Campion.)

The rest of our selections were distributed across a number of films. I was especially pleased that Andrew Garfield won Best Actor for TICK, TICK…BOOM! and Jeffrey Wright took Best Supporting Actor for THE FRENCH DISPATCH. Neither has been winning a lot this awards season, and I’m delighted to tell you that those were my votes in those categories. I do believe that Wright has a good shot at an Oscar nomination, however, and I think that Garfield has a very good shot at winning one this year! Hopefully, they’ll use our endorsement in their FYC ads in the trades in the coming weeks.

As for the rest of our winners, well, I’m even prouder to say that they reflect a very strong and diverse collection of films from 2021. You can read all of our winners on our Chicago Indie Critics website:

Thanks again for following The Establishing Shot and I hope you’re as anxious to see how the awards season shakes out as I am. I’m glad that the CIC rang in with our thoughts and that we did not just rubber-stamp most of the selections that have been chosen thus far by other groups. Bravo!

from The Establishing Shot https://ift.tt/3t9xAJd
via IFTTT