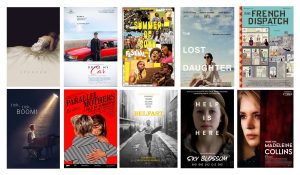 The film world didn’t quite return to normal this year due to the ongoing pandemic, yet it was wonderful to see movies in the theater again after so many months away. (We’ll see how badly the Omicron variant screws up audiences being able to attend cineplexes this winter.) I caught a lot of terrific films in theaters, as well as via streaming and VOD too. So many in fact, that culling down my list this year to a Top 10 was a tricky task. I was able to, however, and even forge a second ten as honorable mentions.

1. SPENCER
The most affecting film I experienced this year was SPENCER, Pablo Lorrain’s deep-dive into Diana Spencer’s state of mind during the Christmas weekend in Norfolk, England when she decided to end her marriage to Prince Charles. It was a devastating portrait of Diana, struggling with mental illness and the glaring spotlight of being a royal for over a decade. In the film, Di was battling all the forces around her – the royal family, protocol, bulimia…she was living in her own private hell, and we were placed right there with her. Often as terrifying as it was moving, Lorrain and screenwriter Steven Knight painted a true tragedy. And Kristen Stewart gave the year’s best performance, for my money, making every moment of Diana’s struggle utterly relatable and palpable.

2. DRIVE MY CAR
The road to self-discovery is a long and winding one in DRIVE MY CAR, a moody Japanese character study. Adapted with finesse for a three-hour run time by Ryusuke Hamaguchi and Takamasa Oe from the short story by Haruki Murakami, this low-key film often felt more like a poem. Hidetoshi Nishijima plays an actor and theater director who experiences various tragedies through the course of his journey, but as much as he’d like to withdraw in pain, he keeps moving forward. His connection with a driver assigned to him, played by Toko Miura, becomes a sort of shared mourning as she’s haunted by a tragic past too. The film is a sly, fascinating exploration of how we connect, self-reflect, and experience grief. It’s also a subtly cheeky riff on being an artist, beautifully realized through the production of the play Uncle Vanya throughout the story.

3. SUMMER OF SOUL
This documentary, directed by Ahmir “Questlove” Thompson, brought to the screen the never-before-seen footage of the 1969 Harlem Cultural Festival. SUMMER OF SOUL (…OR WHEN THE REVOLUTION COULD NOT BE TELEVISED) was a concert film that placed you right in the audience, right on the stage, and right in the joyous vibe of the six-week festival. Add in knowing interviews with surviving performers and notables from the fest and it all made for a buoyant one-of-a-kind experience, the feel-good film of the year for my money.

4. THE LOST DAUGHTER
Maggie Gyllenhaal made an auspicious debut as both director and screenwriter with her adaptation of the novel of the same name by Elena Ferrante. A character study that played like a slow-burn Hitchcock film, THE LOST DAUGHTER presented an idyllic Greek island vacation setting that was anything but restful. As the middle-aged Leda (Olivia Colman, never better) became more and more involved in the goings-on of the vacationers and staff around her, she was revealed to be a very troubled soul. And the flashbacks of how she got that way, with Jessie Buckley essaying the role in the past, made for a fascinating portrait of motherhood, selfishness, and consequences.

5. THE FRENCH DISPATCH
I love Wes Anderson movies and think he is the premier comedy filmmaker working today. He blends bits of Buster Keaton, Blake Edwards, and Woody Allen into his quirky storytelling and even quirkier characters. Ostensibly a love letter to the New Yorker magazine which it spoofs, Anderson’s film told three different tales where the writer covering the story becomes part of the very narrative. Starring many Anderson regulars (Bill Murray, Owen Wilson) and a brusque, yet elegant Jeffrey Wright in a standout supporting performance, THE FRENCH DISPATCH was a character study, physical farce, love story, and sentimental salute to a bygone era of journalism, artists, and individualism.

6. TICK, TICK…BOOM!
In a year with a number of strong movie musical releases like WEST SIDE STORY and IN THE HEIGHTS in the mix, Lin-Manuel Miranda’s directorial debut of Jonathan Larson’s off-Broadway musical TICK, TICK…BOOM! impressed me the most. Andrew Garfield sang and danced with elan as Larson, a young composer trying to create a musical that would qualify as both art and a hit show. This movie managed to be both – a wonder for critics and a crowd-pleaser for anyone who knows how hard it is to be an artist. And Miranda directed every frame of it too as if to the film world born.

7. PARALLEL MOTHERS
For over 30 years, Spanish filmmaker Pedro Almodovar has made movies enthralled with the human condition, with special emphasis on women, members of the LGBTQ community, and individualists bucking the system. His latest film focuses on two women, both new mothers, who share many experiences together including friendship, childcare, and even their sexuality. Almodovar’s favorite actress and muse, Penelope Cruz, stars alongside newcomer Milena Smit in a melodrama filled with twists, reversals, and plenty of parallels to keep us wondering what will happen from first moments to final ones. It opens on Christmas Day in the States and I can’t think of a better cinematic gift this holiday season.

8. BELFAST
Filmmaker Kenneth Branagh tells of his Irish childhood in the late 60s, and the result is the clever and subtle BELFAST. The family in focus here struggles to overcome economic disparity, a country with mandated lockdowns, and a political climate turning brother against brother. In other words, this is a period piece perfectly in synch with our modern times. The six in his ensemble playing the family (Jude Hill, Caitriona Balfe, Jamie Dornan, Lewis McAskie, Ciaran Hinds, and Judi Dench) are all terrific: recognizable, lovable, and funny as they try to navigate the imposing presence of the IRA, separation by employment, various health issues, and the blush of first love at school. It looks and feels a lot like ROMA, only more accessible and enjoyable.

9. SKY BLOSSOM
Journalist Richard Lui’s documentary about injured veterans returning home to the States and the family members that take care of them was the most moving film I saw all year. Released wide in 2021, Lui focused on five families where a student handles the majority of the care given to their disabled parent or grandparent. Both heartbreaking and uplifting, the courage and pluck of the teens belies anyone who criticizes Generation Z as being little more than self-absorbed with social media. The vets are all heroes here, and so are the family members who take care of them, day in and day out. It was truly a privilege to watch such incredible stories spool out and I applaud Lui for brilliantly bringing them to light.

10. MADELEINE COLLINS
I saw this French film as part of the Chicago International Film Festival this past autumn and it’s been playing in my mind ever since. The story concerns Judith (Virginie Efira), a woman leading a double life. She has two lovers, two homes, and two sons in France, and a daughter in Switzerland. How she has managed to juggle all of that with no one discovering her secret for the better part of a decade is the supreme mystery in the film. Near-misses, lies upon lies, deceptions that build into ridicule, Judith is exposed at almost every turn. Yet, there’s something admirable about her living life on her own terms, not those dictated by the status quo, and her lifestyle makes for one sly and suspenseful cinematic diversion.

The 10 runners-up that I also thought the world of were THE CARD COUNTER, MASS, BEING THE RICARDOS, THE TRAGEDY OF MACBETH, THE COURIER, CYRANO, C’MON C’MON, CITIZEN ASHE, IN THE HEIGHTS, JAKOB’S WIFE, and EXTERNO. I also dug SPIDER-MAN: NO WAY HOME, DUNE, THE GUILTY, WEST SIDE STORY, KING RICHARD, THE NIGHT HOUSE, and FREE GUY.

As I said, all in all, it was a unique year both in how movies were seen and in the range of notable releases. And I hope that you saw as many that left suitable impressions on you as well.

from The Establishing Shot https://ift.tt/3FnVhki
via IFTTT