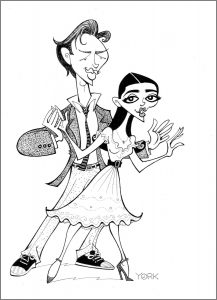 Original caricature by Jeff York of Ansel Elgort and Rachel Zegler in WEST SIDE STORY. (copyright 2021)

When it was announced a few years back that director Steven Spielberg and screenwriter Tony Kushner were going to remake 1961’s WEST SIDE STORY, many asked, “Why?” Indeed, why mess with a classic, a Best Picture winner that won 10 Oscars, and a film that so many have such great love for? Well, for starters, stars like Natalie Wood and George Chakiris were not Hispanic and played their parts with what could most charitably be described as “brownface.” Wood and co-lead Richard Beymer didn’t do their own singing as Marni Nixon and James Howard Bryant dubbed their parts. The script didn’t illuminate the Shark characters as thoroughly as the Jets. And there was plenty of racism and sexism coursing throughout the whole shebang. (Such shortcomings were a product of the times, as well as some unfortunate script choices.)

All that has added some stains to a film adaptation that still contains one of the greatest Broadway scores ever (by Stephen Sondheim and Leonard Bernstein), a clever spin on “Romeo and Juliet” in its love story, and incredible choreography that Jerome Robbins took from his original staging. In this 2021 version updating of the original, Spielberg has kept those strengths, even having his terrific choreographer Justin Peck recreate certain of Robbins’ moves, but mostly he’s improved upon the weak spots in the previous production.

Indeed, Kushner’s deft script goes a long way to eradicating most of those cringe-worthy moments and he’s even added some logic to the order of the events in the plotting. Overall, this new WEST SIDE STORY is a significant achievement, besting the original in many ways, equaling it in others, and adding nothing egregious to the mix.

Spielberg’s success here starts with casting. His young actors are more age-appropriate than their predecessors, not to mention ethnically accurate, and they all do their own singing. Rachel Zegler and Ansel Elgort are particular improvements over Wood and Beymer as the star-crossed Maria and Tony. There is youth on their side as the Puerto Rican ingenue and teenage New York-street tough who inexplicably fall for each other at a dance in a local high school gymnasium. Municipal leaders were trying to forge peace between the two rival gangs with such an event, but the Jets (white locals) and the Sharks (immigrants from Puerto Rico) mix like oil and water. The event does create one success – the coupling of Maria and Tony. Meanwhile, the animosity between the Jets and the Sharks leads to their plans for a rumble to settle who gets to rule the West Side territory.

The plot is that simple really, with a countdown to violence that gives the material an edge that most musicals do not have. It’s one of the reasons it was such a landmark Broadway production and movie adaptation, and Bernstein’s music and Sondheim’s lyrics brought a similar sting to it all. Spielberg has wisely left most of those songs alone, albeit for a different character singing the titular second act love song “Somewhere” which, frankly, doesn’t feel quite right. Still, the score is as gorgeous as ever with Sondheim’s exceedingly clever lyrics shining through.

What Spielberg and Kushner have touched significantly is changing the order of some of those songs, moving them around to where they make more sense for the story. “Cool,” one of the edgier songs from the second act is moved here to the first act. That allows best friends Tony and Riff ( a snarky and snide Mike Faist) an opportunity for a number together, showcasing former gang member Tony trying to talk his tough-guy buddy out of the rumble with the Sharks. Maria’s number “I Feel Pretty,” a rather fluffy piece in the original, now becomes the “11 o’clock number” adding both humor and pathos to the mix, as she jubilantly sings of love completely unaware of what happened at the rumble.

And many of the songs that landed so exquisitely in the 1961 film are often equaled here, with “America” in particular becoming even more rousing. Here, the brisk tune moves into the streets, a painstakingly recreated 50’s New York, and showcases Ariana DeBose’s singing and dancing prowess as Maria’s pro-America bestie. DeBose is part of the powerful last song in the film too, “A Boy Like That/I Have a Love,” which soars here with Zegler equaling her co-star in pipes and passion.

Kushner gives all the characters better dialogue and more screen time, making for clear improvements in most cases. Even though Chakiris won a Best Supporting Actor Oscar, his Bernardo was underwritten. Here, Kushner pens a better part, and actor David Alvarez runs with it. This new Bernardo still lives with Maria in a cramped apartment, but his lover Anita now lives with them too. That helps illuminate the trio’s relationship and provides more insight into the Puerto Rican experience in the Big Apple.

The award-winning scribe Kushner makes smart choices in dozens of other spots as well. He expands upon the character of Chino (Josh Andres Rivera), Maria’s also-ran boyfriend, not to mention Lt. Shrank and Officer Krupke (Corey Stoll and Brian D’Arcy James, respectively). The two cops were almost caricatures in the original film, but here they’re real people and even sympathetic.

Kushner even changes the Doc character into a female one. Valentina, Doc’s widow, now runs the drugstore where the Jets and Sharks hang out, and her marriage was a mixed one, adding commentary on Tony and Maria attempting to make their similar coupling work as well. The fact that the original Oscar-winning Anita, Rita Moreno herself, returns to play Valentina is a feather in this new production’s cap. And she is wonderfully moving in the expanded part.

DeBose is already getting plenty of kudos for her take on Anita as she aces the singing, dancing, and emotional arc of the part. Elgort sings well too and essays Tony’s love and worry equally well. He doesn’t come across as tough as he should – he’s supposed to be the toughest of the Jets – but he’s still good in a tricky part. (Some think that Tony is the hardest lead to play in musical theater as it calls for a man part hoodlum, part fool for love.)

Still, as sharp as everyone is in this production, including Iris Menas as a hinted at transgender Anybodys, the standout is Zegler, In her film debut, she manages to beautifully bring to life her character’s naivete as well as reserves of steeliness. Her voice is angelic and she holds the screen as well as any of her more seasoned costars. You’ll fall in love with her as quickly as Tony does.

Now, if you haven’t seen the original, this one will probably amaze you from start to finish. If you’re a fan of the original, certain elements cannot be bested no matter how accomplished the cast, writer, or director is. The opening “When You’re a Jet” where director Robert Wise and Jerome Robbins created a finger-snapping ballet was a gamechanger in ’61. The update of that here is fine, but not as incredible. Russ Tamblyn’s comedic abilities as Riff in the original are sorely missed here as well. The “Gee, Officer Krupke” number he helmed in ’61 is only serviceable this time out. And some of the energy of the original is missing too with a bit of dragging here and there. Still, this WEST SIDE STORY is a striking accomplishment. It is as spirited, sexy, dangerous, and moving today as it was then. And how many remakes can say that?

from The Establishing Shot https://ift.tt/3IDtwGd
via IFTTT