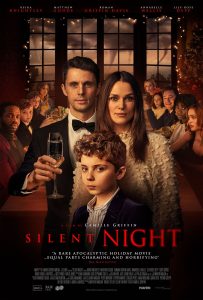 One can imagine the new apocalyptic holiday comedy SILENT NIGHT being pitched as “Richard Curtis meets Lars von Trier.” Indeed, it’s an odd blend of the ribald, British humor of Curtis and the gloomier aspects of von Triers’ MELANCHOLIA. What this film ends up being, however, is neither fish nor fowl. It’s not funny enough to play as a satire of British manners and it’s not dark enough to have the impact it should as a doomsday drama.

The nod to Curtis starts immediately with a number of his tropes trotted out. Nell (Keira Knightley) and Simon (Matthew Goode) are the ultra-gorgeous hosts of a Christmas gathering at a tony estate. She’s self-deprecating to a fault and he’s all sensitive bluster. They have a pair of quirky twin boys and a 12-year-old named Art (Roman Griffin Davis) who drops F-bombs like there’s no tomorrow. Not long into the proceedings, we find out that indeed there will be no tomorrow as a poisonous cloud released by the Russians is going to kill all of England’s residents and there’s not a bloody thing any Brit can do about it.

That however doesn’t stop this brood from hosting a few family members and friends for one last blowout of a Christmas celebration. But here’s where the film starts to go off the rails. As soon as the guests start arriving, they spend far too much time blithely bantering and bitching about everything from hors-d’oeuvres to family secrets with little in the way of acknowledging the crisis. Showing them trying to make the best of an awful situation would be one thing, but these pampered one-percenters act like it’s just another holiday in the countryside.

First-time writer/director Camille Griffin doesn’t help matters either by introducing guests that wear out their welcome in minutes. Annabelle Wallis and Rufus Jones play Sandra and Tony, a snotty, loveless couple who are raising spoiled daughter Kitty (Davida McKenzie) with no guard rails. Lucy Punch and Kirby Howell-Batiste play Bella and Alex, a lesbian couple with almost zero on-screen chemistry. And worst of all, Sam Dirisu plays James, an intellectual who brings along his hippie girlfriend Sophie (Lily-Rose Depp) and they aren’t characters as much as woke cliches.

Sophie is especially grating as she’s the fly in the ointment who refuses to join the others in the planned ritualized suicide sanctioned by the state to avoid a prolonged and painful death from the mist that’s coming. She believes that the state-sponsored rhetoric is fake news, and the horsey red pills handed out to all the citizenry are a way of thinning the herd. Intentional or not, her character comes off like an anti-vaxxer and you want to slap some sense into her “Karen” stubbornness too.

Worse yet, however, Sophie convinces the impressionable Art of her argument and soon enough he’s ranting and raving about the cloud at every turn, hurling F-bombs like he’s Jack Nicholson in THE LAST DETAIL. It’s an insufferable character and performance, and any charm that Davis demonstrated throughout JO JO RABBIT is absent here.

Soon enough, the reckoning is upon them, but the tribe still goes through the motions of opening gifts, indulging in far too much booze and even dancing together to pass the time. The tone shifts wildly from characters taking the piss out of each other in the veddy British way to them moping and mourning their last hurrah. It all plays as hugely theatrical too, but not particularly believable, like when Nell starts fretting about how she didn’t call this friend or that acquaintance to say goodbye. You wonder why mom is so clueless when she has terrified children to fuss over.

I applaud Griffin for making an ambitious dark comedy, at least, but it’s too quaintly Curtis, and not nearly edgy enough like von Trier. In MELANCHOLIA, that filmmaker served up a mix of emotions in his characters who had only hours to live as well, but the coming ruin of mankind and burgeoning sense of loss informed every second of it. In SILENT NIGHT, Griffin forces the audience to spend time with upper-crust twits who are neither profound nor funny in reckoning with their final hours. Who would want to spend even a minute with such nincompoops?

from The Establishing Shot https://ift.tt/3Dgnjfx
via IFTTT