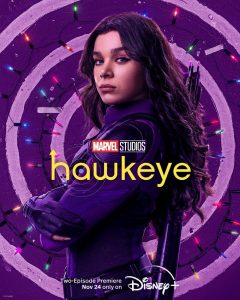 A funny thing happened on the way to launching HAWKEYE, the new Disney + miniseries created as a vehicle for Jeremy Renner. Co-star Hailee Steinfeld steals the show right out from under him.

Perhaps it was intended to be that way as the first two hours of this six-hour adventure are dominated by the set-up of Steinfeld’s Kate Bishop character. We’re introduced to Kate in the first scene as a young girl, experiencing the attack on New York City in 2012 by Loki and his marauding aliens. (You’ll remember that was the plot of the first Avengers film.) As the penthouse apartment of her rich parents crumbles around her, Kate watches Clint Barton, AKA Hawkeye, take out a number of alien thugs with his archery skills. Her life is saved and she’s smitten.

Sadly, Kate’s father dies in the attack, but thankfully, her mother Eleanor (Vera Farmiga) survives. And as successful a businesswoman as Mrs. Bishop is, she can’t keep her daughter from becoming a rebellious young woman. Over a deftly animated credit sequence, we watch as Kate grows into a comely teen, becoming an expert archer, gymnast, and hell-raiser, just like her hero Hawkeye.

With such an opening, the show sets up Kate to be the center of it, and when Steinfeld is onscreen, it’s hard not to focus completely on her. Not only is the 24-year-old actress physically convincing doing all the stunt work, but she’s a stitch delivering quips and reaction shots that demonstrate just what an outstanding comedian she is. It’s a showcase performance, right up there with her critically hailed work from THE EDGE OF SEVENTEEN in 2016.

Steinfeld is so good, she even manages to steal scenes from a one-eyed golden retriever named Lucky. Watching her try to navigate Times Square with the errant pooch on a leash is easily one of the highlights of the show’s first two hours. Just how that dog becomes a central character in the series is one of the funnier twists on hand. So is a hilarious parody of the Avengers as the subjects of a Broadway musical that savages Julie Taymor’s disastrous attempts at turning Spider-man into a song & dance man back in 2010. There’s a lot of humor in this series, not just from Steinfeld and satire like that. Much of the material is post-modern as both Kate and Clint comment on the show while it’s occurring.

That’s key because the plot is somewhat tired, mixing Russian mobsters with one-percenters all involved in nefarious smuggling and other crimes. (The Russians all are in track-suits here, something that HBO’s sitcom BARRY already parodied two years ago.) Some of the action feels a bit too “been there, done that too”, but when Renner gets to banter back and forth with Steinfeld, the show really comes alive.

Clint, you see, is in New York for the Christmas holiday, but rest and relaxation don’t sit well with the aging actioner. He seems a bit lost shepherding his kids around, he winces with embarrassment as fans approach him in restaurants to thank him for defeating Thanos, and he still isn’t over the death of Natasha, the Black Widow. So when he discovers news footage on TV showing Kate escaping an underground auction that ended in gunfire, wearing his old costume that was up for sale there, he finds purpose again.

Soon enough, he’s teaming with Kate to wrangle those mobsters, track down leads as to who’s behind other nefarious crimes in the city, and babysit that daffy dog in their possession. The plot promises all kinds of Marvel twists and turns that those familiar with HAWKEYE comic book lore will adore, but the fun of the series is likely to be found mostly in the fun and funny that Steinfeld brings to the proceedings. (A cross-over with Tom Hiddleston’s equally witty Loki? Now that would make for a great sequel!)

As you’d expect with any MCU or Disney offering, the production values are top-notch all the way around, from the cinematography to the production design to the score. It’s also impressive that they shot so much on location in New York, creating a vast Christmas vibe during its December setting. Some of the action is edited a bit too fast to see what’s going on, but those are the less interesting parts of the story here anyway.

We’ll see just where the series goes in its short run, but it feels like this might be the swan song for Renner’s contributions to the MCU.  This is Kate’s journey and Steinfeld runs with it, proving that she may very well be the actress of her generation. And with the promise of Florence Pugh showing up to match her comedy gifts with those of Steinfeld, this new series could make for one hilarious holiday present.

from The Establishing Shot https://ift.tt/3FWhCFy
via IFTTT