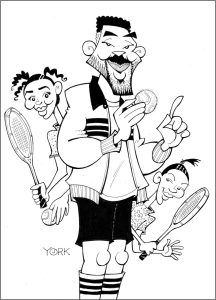 Few biopic characters come as ginormous as Richard Williams. The force of nature who dominated his family with equal parts love and discipline is the subject of the new film KING RICHARD. Early in his young daughters’ lives, Richard realized that Venus and Serena had the makings of tennis greatness and drove them to reach their maximum potential. They did, becoming tennis superstars and proving that their papa was not only perceptive, but one helluva coach. Playing the larger-than-life Williams is one of cinema’s biggest movie stars – Will Smith. Smith is fantastic here, capturing all the drive, chutzpah, and savvy of Williams in what is easily the best performance of his career. It’s the perfect match of part and performer, and the result is the feel-good film of the season as well as one of the better, big screen biographies in quite some time.

The story of how Richard and his knowing wife Oracene “Brandy” Price (Aunjanue Ellis) raised a family of seven in Compton and made their daughters world-famous would seem unbelievable if it wasn’t true and screenwriter Zach Baylin knows embellishment isn’t necessary for such a genuine story. He wisely presents it all with a straight-forward earnestness. That style is matched by director Reinaldo Marcus Green who shines the light on character throughout, and not only coaxes fantastic performances out of Smith and Ellis, but of the young actresses playing the Williams’ kids here, particularly Saniyya Sidney as Venus and Demi Singleton as Serena.

KING  RICHARD concentrates on just a few years in the Williams’ lives, the early years, while Venus and Serena were still in grade school and starting to make a name for themselves in the junior tennis world. They love the game and have a love for life too. Still, their dad pushes them, constantly philosophizing about what it takes to be successful, and often pushing them in ways that would raise anyone’s eyebrows. Do they need to practice in the rain? Of course not, but Richard surmises that soggy tennis balls will help them learn to hit in all kinds of environments and conditions.

At times, the film showcases Richard as a loving dad and clever teacher, but it also shows him as endlessly stubborn, chatty, and acting like a bit of a know-it-all. When he tries to bulldoze the professional tennis coaches to bend to his ways, he starts to verge on the unlikable, but Smith underplays Richard’s worst traits and keeps us on his side. It also helps that Baylin has many of Richard’s foils sass Richard back, from his wife to his family to legendary tennis coaches Paul Cohen (Tony Goldwyn) and Rick Macci (Jon Bernthal).

Not surprisingly, Smith is getting plenty of Oscar buzz, but Ellis, Sidney and Singleton should be contenders for the final five in the supporting category as well. The two young girls are all the more impressive in their accomplishments for having to not only convince us that they’re good tennis players running around the court, but they’re imitating the way Venus and Serena play too. It’s an incredible accomplishment.

The film shows the Williams family fighting the prejudice of a Compton family making its way into country clubs and tennis tourneys, but Green doesn’t overdo the drama. He echoes the positive energy of what all of the Williams family brought to every endeavor and you’ll find yourself cheering them on even before the girls get into their various tennis matches.

And yet, Green delivers one helluva action scene in the third act, dare I say acing the set-piece, when Venus gets to show her stuff in the finals of a junior tournament. It’s thrilling, tense, and moving as she struggles to handle the pressure, and her family matches her emotions every point of the match. Green even manages to keep a lot of it funny with Smith’s comic asides, as well as the fretting of Macci in the stands. (Bernthal is one of the best character actors working today and he’s a delight here.)

I wish we got to know the rest of the Williams kids some more, and at times, a few of Green’s music cues play heavy-handedly. The film is long too and could’ve used some trimming here and there. But, by and large, this is a delightful film that comes as an early Christmas gift for audiences, simultaneously showing in theaters and on HBOMax. The film even manages to come across as an antidote to a cinematic world far too thick with superhero franchises. For real-life heroics, observe what the Williams’ girl do here with their rackets. Thor’s hammer just can’t compete.

from The Establishing Shot https://ift.tt/3r5bTZG
via IFTTT