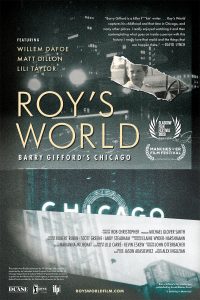 Barry Gifford is one eclectic writer, having penned novels, short stories, essays, poetry, graphic novels, and screenplays. And, as evidenced in the new documentary about Gifford entitled ROY’S WORLD: BARRY GIFFORD’S CHICAGO, his life is nothing if not a strikingly vast range of experiences too. Less documentary and more pastiche of memories, this film by director Rob Christopher shares seminal pieces of Gifford’s life with the author’s words narrated employed to describe them. The film feels like you’re pouring over a scrapbook, with the subject sitting right next to you, offering up fascinating anecdotes to go with the faded and haunting photographs. It’s a singular experience and it’s one of the special films being showcased as part of the Chicago Film Critics’ Film Festival this weekend at the Music Box Theatre.

Gifford’s life was filled with events both comic and tragic as he grew up in the Chicago of the 50s and 60s. He chronicled his experiences in a collection of semi-autographical tales entitled The Roy Stories in 2013. Those serve as the script here, essays read aloud by Gifford, along with celebrity voice-overs Willem Dafoe, Matt Dillon, and Lili Taylor. These four distinct voices provide the range for the wide swath of experiences the author recounts, from tough and brutal winters in The Windy City to the tough and brutal fallout of his parent’s divorce.

Using all kinds of visuals to showcase Gifford’s memories, from faded black and white photographs to 8 mm home movies to clever snippets of animation, Christopher helps put us in Gifford’s head wholly as he experiences the varied memories in his life. And interestingly, the sometimes scattered thoughts and order of events succeed brilliantly as that’s how the mind works. Our recall is never cogent or a straight line, but rather, a series of striking images burned in our psyche, underscored by bits of language, music, even smell. That’s how Christopher approaches this film. It plays like a memory play, sometimes horrifying, other times hilarious, but always enthralling.

And Gifford’s memories of his life are incredibly perceptive. He’s got a great recall and a wisened take on all that occurred, and he knows just how to express it in perfect prose. For example, Gifford surmises that his parents should never have gotten together as they were too different in age, religion, and temperament. Still, even with his mature take on what went down decades ago, Gifford’s recounting of it remains painful. His details of the disdain in his home can sometimes play as hilarious,  but more often, it’s heartbreaking.

Christopher matches the images to Gifford’s prose with resounding precision. When the boy talks of not knowing his mother all that well, the words are matched by pictures and home movies showing a faded visage. When Gifford’s stories turn to the time spent following his dad around, living in hotels, Christopher echoes the boy’s sense of feeling overwhelmed in such vast places by butting shots of imposing facades and broad lobbies up against the narration.

The director separates the anecdotes via titles too, keeping the feel of chapters in a book. Amongst the standout stories in Roy’s telling are episodes about discovering girls in the neighborhood, his impressions of Florida, and his distaste for mom’s new husband. Christopher has orchestrated a clever and unique coming-of-age tale, but it’s also one that serves as a great travelogue of Midwestern America in the mid-2oth century. Indeed, Chicago is brought to life wholly and becomes as important a character in Gifford’s tales as any human.

The writing of Gifford is often characterized by an often dream-like quality, as evidenced in his novel Lost Highway, which he adapted with David Lynch for the 1997 cult classic. That sensibility informs Christopher’s film too, giving it an eerie tone at times.  The film feels informed by the experimental cinema of the 60s too, as well as the noir influences that can be found in much of Gifford’s writing as well. Christopher has crafted a deliberate and meticulous match of words, images, and biography.

The film is only 75 minutes, but it is mesmerizing the entire time and will surely inspire you to want to see more from this expert filmmaker, as well as start devouring the works of Gifford. ROY’S WORLD: BARRY GIFFORD’S CHICAGO is showing at The Music Box at 2:30 PM this Saturday, November 14th. It’s a treat for any Chicagoan, child of the mid-20th century, or audiences who crave adroit storytelling. Don’t miss it.

from The Establishing Shot https://ift.tt/3okLX9w
via IFTTT