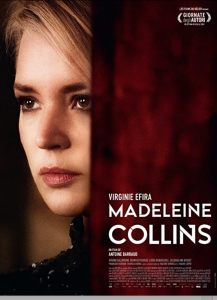 French filmmaker Antoine Barraud has delivered one of the most fascinating and complex films of the year in MADELEINE COLLINS and it’s apparent from the very first scene. In a single, continuous take, an attractive French woman in her late thirties looks at dresses in a posh woman’s shop. A few moments later, she faints in a dressing room, hitting her head, but insists to the clerk that she is fine. Then she makes a hasty retreat before some sort of accident occurs off-screen. What happened? Did it happen to her? And who is this woman?

The answers to those questions won’t be discovered until the final minutes of Barraud’s new thriller, but what a journey it is to its clarifying finish. The movie tells a twisty, nervy narrative that would have been right up the alley of Alfred Hitchcock. MADELEINE COLLINS was one of the highlights of the Chicago International Film Festival this year and continues to ride the festival circuit before opening in its native France on the 29th of December and who knows when it will premiere nationwide in America. (That’s why it pays to attend the CIFF.) No matter when you get the chance to view it, it will be well worth the wait.

MADELEINE COLLINS is a fascinating film with its story following the double life of a woman named Judith (Virginie Efira). She somehow is managing to live in two different countries (Switzerland and France),  with two different families, and her deceptions play as both shocking and liberating. Shocking, because her actions turn her into a compulsive liar, but remarkable in her talent for getting away with it all.

In Paris, where she goes by the name Margot, her husband is orchestra conductor Melvil (Bruno Salmone) and she has two sons with him. In Geneva, she lives with the unemployed Abdel (Quim Gutierrez) and young daughter Ninon (Loise Benguerel). Judith/Margot is able to pull off such a con having a job as a translator that takes her around Europe, and she uses that excuse to slip around all the more.

She’s been one crafty con, getting away with her lifestyle for over a decade, but as the story gets cooking, her constant lying is starting to unravel both worlds, not to mention her mental health. Both of the men in her life want Judith/Margot to quit work to pay more attention to the needy kids. As if the guilt isn’t enough, Judith/Margot’s worlds suffer some near-misses with each other and those events threaten to crumble her entire charade. At one point, Margot meets a colleague in France, then runs into him at a dinner party in Geneva while she’s Judith. When he calls her Margot in front of Abdel, Jennifer has to come up with a story lickety-split to appease both doubters.

Soon everyone starts to have doubts about her truthfulness, even her boys, but  Judith consistently rejects the sexist demands placed on her to be a more doting wife and mom. She pushes back against both men, refusing to abandon her excellent career and slip into their ideal of her. Her unwillingness to bend won’t get her any votes for mom of the year, but it does illustrate a certain version of feminism that stands tall against sexist men.

The escalation of her con artistry, however, starts to turn everyone against her, even her previously supportive parents who are unaware of her deceptions.  (The sublime Jacqueline Bisset plays a key supporting part as her strong-willed mother.) Both of her partners seem on the precipice of violence, and even Judith’s shady ID forger Kurt (Nadav Lapid) starts to pose problems for her. He worries that she’s becoming sociopathic, but he also admires her criminality.

The film never exactly explains how Judith/Margot would have gotten away with a couple of pregnancies. Additionally, Barraud and fellow screenwriter Helena Klotz fail to make Margot’s sons little more than symbols. And neither partner seems entirely worthy of her commitment. The film is more interested in exploring a woman who unapologetically embraces her own needs and desires, and it plays admirably considering women’s needs are so often marginalized in society.

The last act is a jaw-dropper as Barraud tightens the screws, puts Judith in extreme danger, and even manages to explain that strange opening scene in the clothing store. The director also finally gets around to explaining the film’s rather blind title. And all along, Virginie Efira gives a wondrous performance, infusing her character’s scandalous behavior with just enough wit and warmth to keep us invested in her deviousness. You’ll likely be of two minds about her protagonist, and something tells me that is exactly what the filmmakers want here.

from The Establishing Shot https://ift.tt/3jxB56y
via IFTTT