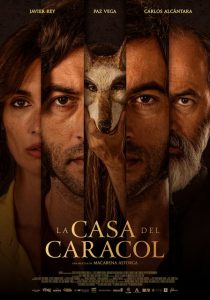 Horror is a genre that permeates the American market. On any weekend, whether in the theaters or on Shudder.com or Netflix, fans can usually find a new scary movie opening. Not so with foreign countries. When Spain or Russia dips its toe into the world of frighteners, it’s a rarity and those who do treat the genre with an earnestness. There simply aren’t enough of them to warrant filmmakers treating them as spoofs. Indeed, earnestness is worn very much on its sleeve in the new Spanish horror film THE HOUSE OF SNAILS. Its tropes are wholesale familiar ones, but they’re delivered admirably straight with nary a wink in sight.

Making its USA debut at the Chicago International Film Festival, THE HOUSE OF SNAILS, originally titled La Casa del Caracol, is one of this final weekend’s showcased horror features. It’s an impressively made film, filled with some very good scares, and a consistent eeriness in every scene throughout. From the first moment to last, the film gives off a sinister vibe, with even the daytime scenes feeling wholly unsettling.

Javier Rey plays Antonio Priesto, a blocked Spanish writer in the late 1960s, looking for some peace and quiet in an out-of-the-way place to write his new novel. With his suitcase and manual typewriter in tow, he drives his ragtop up into the hills of Quintanar, a small Spanish village, to a lonely manor he’s renting to pound out his prose. Things start off immediately off-kilter, however, as he happens upon a dog sitting in the road staring at him. It’s as if the pooch has been waiting for his arrival. Antonio gives the pooch his water and packs him up in the backseat to be his journey’s companion.

Arriving at the swank home, Antonio meets Berta, a local woman who has set him up in the house. She’s as welcoming as she is beautiful. Played by the comely Paz Vega, who looks even more gorgeous than she did in SEX AND LUCIA 20 years ago, Berta makes Antonio fret that their chemistry may be a distraction. The rest of the town has all but spit on him upon his arrival, but Berta, she’s the entire welcome wagon unto herself.  Why are the locals so hostile to outsiders? It turns out that they’re fearful of the return of a supernatural villain named Vimero, a shapeshifter mythologized over the decades. Legend has it that entity killed townsfolk decades ago and then cursed their offspring to be deformed. That explains the granny with disfigured eyes who warns Antonio to leave, and the savage Esteban, a local hunchback locked in a barn for eating the hearts of live animals.

Such story points would easily be played as parodies in American horror. Cryptic old bags and shackled man-beasts sound like something out of the goofy spoofs in the SCARY MOVIE franchise, but here, they’re played with utter seriousness. That straightforwardness takes a while to get used to – you keep waiting for the other shoe to drop – but it never comes. Instead, the cast, cinematography, editing, and underscore perform with complete sincerity. THE HOUSE OF SNAILS wants to make its audience uncomfortable, not laugh.

Antonio realizes that the Vimero story is what he should be writing, and in between flirting with Berta and experiencing trippy nightmares about chases through the woods, he types out the story with fervor. Never mind that his dog seems to disappear whenever a friendly priest visits, or that the locals shun him even at a town annual shindig. The stubborn locals in River City, Iowa in THE MUSIC MAN have nothing on these prickly denizens.

Director Macarena Astorga and writer Sandra Garcia Neito keep the film percolating with dread, making us fear for Antonio, Berta, that wayward dog. When the revelations of exactly what’s been going on finally reveal themselves, it pays off, even if you might have figured it all out a few reels before the end. THE HOUSE OF SNAILS is well-made, clever to watch, and comes with a denouement both chilling and cheeky. It might even be setting up an obvious sequel. In that regard, maybe the Spaniards have learned a thing or two from American horror. No matter where you are on the globe, it’s always a good thing to keep a great ghoul going.

from The Establishing Shot https://ift.tt/3m5JDDq
via IFTTT