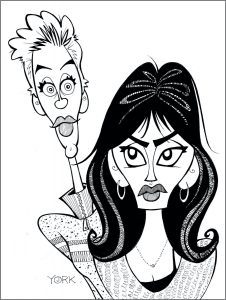 Pedro Almodóvar’s new film isn’t scheduled to open in the United States till Christmas, but it’s one of the big foreign features at this year’s Chicago International Film Festival. It was shown to a full house Friday night and the impressed audience was left stunned at the end. The film is a vivid character study concerning, you guessed it, two mothers. They give birth at the same time and indeed, their lives parallel each other from there on, but this being an Almodóvar film, the lines criss-cross, twist in all kinds of ways, and circle back on one another too. It’s a film filled with symbolism, sexual politics, secrets, and melodrama. In other words, vintage Almodóvar.

It also contains the best screen performance that Penelope Cruz has given to date. Here, she plays Janis, a successful photographer in Madrid, cresting into forty and knowing who she is and what she wants. What she wants is Arturo (Israel Elejalde), an archeologist she’s photographing, in multiple ways. First, she wants him to help her discover the identity of bodies rumored to be buried on some old country family land, and second, she wants to bed the dreamboat even though he’s a married man.

Almodóvar then cuts to nine months later, in one of his cheekiest edits ever, to show that Janis became pregnant during her one-night stand and is now enthusiastically waiting in the maternity ward to give birth. Her roommate is Ana (Milena Smit), a teenager who is not as gung-ho about her pending delivery. So, Janis takes her under her wing as Ana’s real mom is a self-involved actress (Aitana Sanchez-Gijon) about to go out on a year-long theatrical tour. Thus, within 15 minutes, the writer/director has set up that not only are Janis and Ana both mothers, but the older woman is doing double-duty as a sort of surrogate mom giving her aid and advice.

Eventually, the two moms part ways, returning to their separate lives. When Janis introduces Arturo to his daughter, he thinks there is little resemblance. It reinforces why Janis wants to find out about the bodies buried in that plot as Janis never knew her father. She’s desirous of family connection and wonders if her daughter may favor her unknown father’s looks and DNA.

While stopping at a local café, Janis runs into Ana again and they rekindle their friendship. When Ana tells Janis that her baby has died from crib death, Janis invites the girl home with her, and eventually, her stay turns into employment as she’s hired to be the nanny of Janis’ daughter. This being Almodóvar though, nothing is ever so smooth and pat. There’s more to each of the stories of Janis and Ana, additional parallels, and soon their lives become as entwined as a DNA strip.

To tell more of the story would be to ruin too many of the delicious and often devastating twists that Almodóvar has written. Suffice it to say, it’s very melodramatic, and he’s instructed his trusted composer Alberto Iglesias to create a score that recalls both Douglas Sirk and Alfred Hitchcock. Indeed, at times PARALLEL MOTHERS feels like it’s edging towards a thriller in the vein of the “Master of Suspense.” But Almodóvar is a much more empathetical filmmaker than Hitchcock and he loves his characters one and all. Arturo returns and is a mensch. Even Ana’s vain mother summons compassion and courage as the story twists and turns.

The cast, including Almodóvar stalwart Rossy de Palma, is exceptional, with Smit making the most of all her character’s many contradictory layers. And Cruz is phenomenal. She makes Janis incredibly strong, painfully vulnerable, and wholly sympathetic even when she starts pulling strings and keeping secrets to mother all those under her wing. In fact, Cruz’s work is so strong here, it is high time that she be included in the shortlist of the very best actresses working in cinema today. Few actresses this side of Meryl Streep or Cate Blanchett can compete with Cruz’s resume of standout work including VOLVER, ALL ABOUT MY MOTHER, VICKY CRISTINA BARCELONA, PAIN & GLORY, MA MA, NINE, BROKEN EMBRACES, JAMON JAMON, and THE ASSASSINATION OF GIANNI VERSACE, to name just ten.

Almodóvar’s colorful palate is on display too, at times echoing the joie de vivre in Janis’ life, and at other times, serving as a dramatic counter to the depths of despair both she and Ana go through. Like Almodóvar, Janis wears her emotions on her sleeve. She cares about her work, her family, and even finds time to champion unearthing the truths buried during the Spanish Civil War. Janis is as strong a character as Almodóvar has ever written, and PARALLEL MOTHERS is one of his strongest films ever. It’s a shame you may have to wait till Christmas to see it, but what a present it will be.

from The Establishing Shot https://ift.tt/2YWHHED
via IFTTT