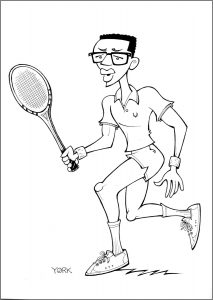 President Barack Obama once gave an interview where he talked about the two black athletes that really influenced him as a child. One was Muhammed Ali and the other was Arthur Ashe. There’s always plenty of discussion of Ali in pop culture, but I wonder how many of Generation Z know about Ashe. That makes the new documentary CITIZEN ASHE even more important. Ashe’s legacy should be learned by every generation, not only for what he did to break barriers in the game of tennis, but the good fights he fought for four decades regarding racism, equality, and more.

CITIZEN ASHE chronicles the many highlights of Ashe’s life, with candid interviews with the late great athlete himself, as well as his inner circle, VIPs, and famous tennis types including Billie Jean King. The documentary also feels like Ashe, as it is presented in the same calm and measured way that was the man’s style. It’s an American-British production, from filmmakers Rex Miller and Sam Pollard, and it’s one of the showcase films at this year’s Chicago International Film Festival. It has so much to say about not only Ashe’s celebrated life but also the larger issue of racism that he constantly had to fight against.

Even those familiar with Ashe’s career will find many new discoveries in this telling. Miller and Pollard dig deep into Ashe’s childhood, get detailed interviews from Arthur’s brother Johnnie, and show many personal pictures that have not been seen before. But for most of the film, they rely upon the public record of Ashe speaking for himself to illuminate his life. And what a fascinating tale it is to tell, as Ashe chronicles his journey from Richmond, Virginia to the prestigious grass of Wimbledon to the embrace of Nelson Mandela.

Ashe talks about what it was like to be a black tennis player in the mid-20th century when the sport was lily-white. Even the tennis togs then had to be all white, virtually a symbol of the ‘whites only’ vibe coursing through the sport then. In fact, when Ashe started playing, only his black glasses belied the clothing mandates that every country club and court demanded.

The doc also showcases the better parts of Ashe’s stunning career, like his championship win at Wimbledon, his years coaching the USA Davis Cup team, and his run-ins with tennis bad boys Jimmy Connors and John McEnroe. (McEnroe even appears in the doc, but he speaks well of Ashe.)

In past interviews culled for this doc, Ashe also speaks candidly about his political awakening after the assassinations of Martin Luther King and Robert Kennedy, and his battle to play tennis in South Africa during the height of apartheid. Some of Ashe’s reflections are wittily dry, others stoic, but they’re all refreshingly candid. Ashe didn’t pull punches, even though he delivered his opinions in a cool and controlled register.

The final part of the doc focuses on Ashe’s numerous health battles and his courage in confronting both the heart attack that ended his career as a player, as well as the AIDS diagnosis caused by a surgical blood transfusion. Still, the documentary doesn’t dwell on Ashe’s physical decline. Instead, it lets his loving wife Jeanne Moutoussamy talk of her husband’s bravery throughout those dark years. (Ashe died in 1993 at just 49 years of age.)

The documentary suggests that Ashe’s heart attack may have been coaxed along by the bottled-up anger inside him as he wasn’t allowed to raise his voice or lash out due to being a black man in the white man’s world of tennis. Connors and McEnroe’s white privilege allowed them to act like hellions on and off the court, but it was a luxury never afforded Ashe. The doc even draws the line from tennis’ stifling of Ashe to the NFL’s punishment of Colin Kaepernick. Indeed, it’s a short one.

CITIZEN ASHE is an entertaining doc, for sure, but there is gravitas in every minute. It makes the case that the nation still has a long way to go to find the equality Ashe fought his whole life for. The film also goes a long way to restore Ashe to the conversation. He was a great athlete and citizen of the world, on and off the court, and every generation should be reminded of that.

from The Establishing Shot https://ift.tt/3mVhfmC
via IFTTT