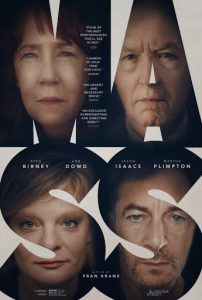 It’s a clever title, MASS is. It has a double meaning here in this tightly wound character study. The word not only shorthands a mass shooting at a school that has occurred and drives the plot here, but it also references the church where four parents congregate to discuss what happened. Can such a sanctuary help these four find forgiveness and peace? That is the question in this superbly realized new drama that is now in theaters.

Writer/director Fran Kranz sets the story up in real-time, starting with Jay and Gail arriving at the church first. They are played by Jason Isaacs and Martha Plimpton, the parents of a teen boy who was killed in the shooting spree. Arriving shortly after they drive up are Richard and Linda (Reed Birney and Ann Dowd). They’re on the other side of the spectrum as their boy was the teen who went ballistic and slaughtered his schoolmates. Jay and Gail want answers and Richard and Linda have agreed to meet face-to-face for a proper sit-down.

At first, they’re courteous and hesitant. Each parent chooses their words carefully, extending overt courtesies, and striving to be civil. But soon enough their emotions – anger, confusion, grief – get the best of them. Their conversation turns into a volatile version of table tennis with angst and raw nerves volleying back and forth amongst the four. Jay and Gail want to know why Richard and Linda didn’t see signs of trouble in their son and soon enough verbal histrionics are ricocheting off one another, almost like bullets flying in the school on that horrific day.

All four actors give incredible performances, with Martha Plimpton standing out as a woman who didn’t want to participate at first, but gradually finds her voice and lets her rage rip. Plimpton’s Gail feels like a powder keg; you’re ready for her to explode at any moment. When she finally lets it out, it’s as cathartic for the audience as it is for Gail.

Isaacs and Birney play opposite sides of the spectrum. Isaacs is a solid, salt-of-the-earth type, a man of the people sort using his anger to rail against guns and lawlessness online in the aftermath. Birney is a businessman, tempered by a cooler head, and exhausted by the work of having to rehash the horrors of his boy’s actions every day for over a year. These two actors are always good, but here, they are incredible.

Then there is Ann Dowd’s Linda who has trouble fathoming it all and therefore has receded into suffocating versions of compartmentalization. Linda is a lost soul and her suffering has left her overcompensating with kindness and hesitations. She even offers up a homemade flower arrangement as a peace offering at first, but the homemaker bit only masks her doubts concerning her mothering of a monster. And Dowd, with her bewildered eyes and quivering mouth, breaks your heart over and over throughout.

Ann Dowd is getting most of the Oscar buzz thus far, but all four deserve nominations for their work here. At times, MASS feels like a play – this could be WHO’S AFRAID OF VIRGINIA WOOLF with the quartet sparring so – but it’s refreshing to see a film simply shot, grounded in reality, and allowing for great acting to be the special effects.

There are no easy answers in the story, just as issues of mental illness, depression, teen pressures, and family dynamics cannot be so easily delineated. Kranz’s script is superb, giving each character their own voice and the actors make it all sound natural and never preachy. The film examines many sides of such violence in society and leaves it up to the audience to determine their own conclusions about where the true blame lies. The only truth Kranz speaks here with certainty is that all four parents are victims too. His is a devastating film, but it’s also one that ultimately sides with hope. The first step in changing is always a willingness to try to do so, and this film shows four damaged souls trying to find some sort of clarity and forgiveness. It’s something to see, and one of the year’s very best films.

from The Establishing Shot https://ift.tt/3p3SdEA
via IFTTT