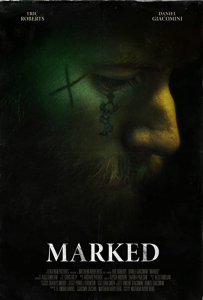 The 2021 Chicago International Film Festival started in full swing Wednesday night and this Friday night you have an opportunity to catch the horror shorts in this year’s “After Dark” series. They’re entitled SHORTS 3: UNEXPECTED TERRORS, and you can catch them virtually via chicagofilmfestival.com or at the River East 21 Friday night at 10:30 PM. This year’s crop of six is a varied bunch and each of them is quite bleak, even the more comedic ones. They’re a fascinating lot, however, providing an edgier counterpoint to the typical Halloween escapism.

The first one up is INHERITANCE, a 14-minute film written and directed by Annalise Lockhart. The scares start on the 25th birthday of Norra (Victoria A. Villier), a young African American woman celebrating with her older brother (DeLeon Dallas) and father (Ron Brice). Dad gives her a gift to share with her sibling – the deed to the family cabin there in the woods. Norra loves Dad’s generous offer but then she notices ghost-like visages mulling around the cabin staring at them. Who these intruders are and why they are there is disturbing, but the plucky family’s defense of their home against them makes for a cheeky climax. BTW…this is the only short that comes with what could be qualified as an upbeat ending.

Next comes AS IF I NEVER EXISTED from Turkey. Written and directed by Murat Emir Eren, the film focuses on a woman (Nihan Asici) who is trying to escape a loveless marriage and a suffocating life. Those feelings manifest themselves into a 14-minute fever dream as she imagines herself trying to exit even though her husband (Emre Yetim), various others, and certain memories, stand in her way. It’s artsy, angsty, and will leave you feeling wholly on edge, just like the protagonist.

Zombies aren’t exactly the, ahem, freshest antagonists in horror, but at least THE LAST MARRIAGE finds a way to make the undead amusing. Swedish filmmaker Carl Molindate’s story concerns a married couple trying to keep it together in a post-apocalyptic world overrun by ‘walkers.’ The marriage of Janne (Christopher Waglin) and Marie (Emma Molin) has reached a point of mutual acrimony and defeat, despite handily battling the threats beating down their door. The actors play it straight, quibbling about chores and a vanilla sex life, even if Molindate’s direction is more lampooning via cocked camera angles and broad music cues. It’s a deft 16-minute short but it needed to be funnier, especially for those who’ve seen enough zombie parodies to last a lifetime.

MARKED is the best of the bunch, a tight, nasty short of 12 minutes that you could imagine being a longer feature-length film. That’s not to say it doesn’t tell its story perfectly well given its time frame. It’s just that it’s so accomplished, you want more. In the single setting of a tattoo parlor, writer/director Avery Berg showcases two men at odds with each other. A leather-clad, inked tattoo artist (Daniel Giacomini) works on the arm of a sixty-something customer (an utterly superb Eric Roberts). The design is of The Grim Reaper and indeed, death will follow shortly. The customer is elegantly dressed in a crisp white shirt with a rich man’s tan, but his tone is subtly dangerous and threatening. For certain, MARKED has the most disturbing ending of this year’s shorts. Now, if Berg will just tell us even more in a feature-length film.

Mexico’s Mitzi Sarai Martinez wrote and directed LA ULTIMA CENA, which is Spanish for The Last Supper. It’s a haunting, 10-minute dissertation on death, brought to ghostly and ghastly life as a shrouded female specter haunts the edges of the screen, cloistered cleverly in the background of Martinez’s shots, patiently waiting to get her bony fingers on various recruits. The film is a slow burn, sneaking up on you as slyly as Lady Death does, all the time straddling the line between being truly disturbing and darkly comedic.

Finally, there is THUMB, written and directed by Alexandra Pechman. Like MARKED, this feels as if it could stand to be a feature film. There’s a lot of back story to it, shorthanded a bit too quickly, but Pechman ensures that we’re unsettled from the first moments as a young woman (Kate Adams) starts packing up the opulent home of her deceased, performance artist mother. When a family friend (DeMorge Brown) comes to visit, unsavory truths come out. So does the ghost of the mom (Allyson Taylor), who starts making her presence all too well known. Sometimes less is more but this one could yield a feature.

There are numerous other shorts this year at the CIFF, but few will disturb you like these. Again, check on the CIFF site for more details regarding these films and some terrific long-form horror being showcase at the festival this year as well. So many good films, it’s scary.

from The Establishing Shot https://ift.tt/3lHhen1
via IFTTT